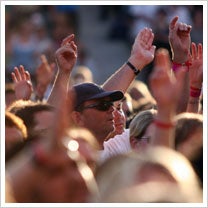 Here's the new brand--same as the old brand.

It might sound like a crazy way to start off the last blog in a series about the rebranding of a company, but at the end of the day, it was less about how Pete Wiltjer would change his brand and more about how he changed the way he presented it. He's got a new website, complete with new copy, integrated social networking tools and a new logo. But he's still sending the same message, as illustrated by the photo here: "I help you find the right people." In the five years since Wiltjer first got into the PR game, finding the right people has taken on a whole new meaning. With the emergence of social networking as a mainstream marketing tool, he's putting himself out there as someone who can help clients properly use social networking tools and filter out the noise that can also be created by them.

"Business communication since five years ago has changed," he says. "Now it's a lot more interconnected and everyrone has to maintain multiple networks."

Wiltjer says it's that idea of interconnected networks that played a large part in the selection of his new logo. He's been diligent about maintaining his own web of networks, as well, and was recently able to mine a potential new client through his connection with an old friend on Facebook.

Despite his emphasis on modern social networking tools, Wiltjer's overall goal in terms of his new website was to simplify it. He's gone away from the model of the old site, which sought to outline around 20 of the services offered by the company. The new site will have a less-is-more approach on its homepage to make it easier for existing clients and prospects alike to get started. It will also highlight some third-party case studies, something Wiltjer recommends to many of his clients as a way to provide examples of their companies' successes rather than turn off prospects with desperate sales pitches.

Overall, Wiltjer says that's been the biggest lesson he's been able to take away from his rebranding project--the idea that it's more effective to pitch something to a client when it's something you're already done for your own business.

"Now I have a personal reference for some of the advice I pass on," he says. "I can say, 'This is how it worked for me.' It seems to resonate with people more strongly than if I say I was hired to do it for someone else."

If you want to keep up with Pete, you can find him at Entrepreneur Connect, where he goes by pwiltjer.