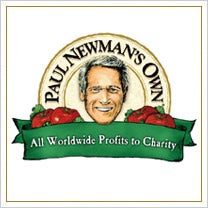 When Paul Newman died over the weekend, he left behind not only a canon of postwar films unparalleled in Hollywood--Cool Hand Luke, Butch Cassidyand the Sundance Kid, The Color of Money--but he alsobequeathed the legacy of one of the most successful marriages of starpower and consumer-product branding ever to hit supermarket shelves.

The ace actor and expert race car driver cofounded the Newman's Own brandof salad dressing in 1982 with friend and author A.E. Hotchner. Theidea was to use Newman's name and image to sell food products thatwould benefit charity. The brand's lineup--each product uses anartist's sketch of the late thespian--has since expanded to includespaghetti sauce, lemonade, wine and other products. The company claimsto have donated all profits, nearly $250 million since its inception,to nonprofit organizations. One of the beneficiaries has been the Holein the Wall Camps--summer getaways for children with serious illnesses. While many entrepreneurs probably think they could benefit from having a Hollywood legend endorse their products and services--with change to spare for charity--experts argue that Newman's Own has more than big-screen pedigree going for it. "Paul Newman changed the mode of a celebrity getting into the food business," says John L. Stanton, food marketing professor at St. Joseph's University in Philadelphia. "If consumers didn't believe profits were going to charity, if they didn't think the product tasted good or wasn't good for them, they wouldn't buy it."

He notes that many celebrity-endorsed food ventures, from Planet Hollywood restaurants to the supermodel-endorsed Fashion CafÃƒÂ© chain, have failed to launch. A celebrity's good name, he says, only guarantees entrÃƒÂ©e to free press and initial consumer interest: The brands must bring consumers a quality experience in order to see them return again and again. For that reason, Newman's Own will likely live on. "As long as they mange the legacy and live up to the promises to charity Paul Newman made," the professor says, "it can go on for a long time."

The Tech Landscape Has Changed and It's Time Tech Leadership Change With It.