By Laura Lorber
November 24, 2010
Opinions expressed by Entrepreneur contributors are their own. 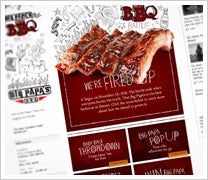 In our last post, we gave you a rundown of what we heard when we did our social listening for Big Papa's BBQ -- the live test case we're using to illustrate the power of social media to drive conversation, influence and sales. Today, we'll tell you about the campaign we're developing to capitalize on the gaps we uncovered.

Starting with a good product makes a marketer's job easier. Great BBQ has real power over people. Each part of our social-media campaign is designed to use social media to get the "Q" in more mouths -- by bringing the food to the people and the people to the food.

Barbecue is often a competitive sport. So we're starting a good-natured BBQ Battle in Denver -- seeking to show that Big Papa's has the best barbecue in the city -- and that it competes day-in and day-out to try to prove it. The hub of the online effort will be on Facebook.

Here are two important steps for launching a social-media campaign and how we're executing on them:

1. Start a daily conversation to engage your audience.

We have to get on the local radar. We'll do this by inviting people into our circle and giving them something to talk about. Our two main daily tactics include:

Big Papa Pop Up: We're stuffing Big Papa's $25,000 smoker full of baby back ribs and giving them away every time we "pop up" in Denver. The only way people know where we'll be is by following us on Facebook and Twitter. At the events, we'll ask each person to give us their email address (building our database for future communications) in exchange for free ribs and a coupon -- to drive them in-store.

Baby Back Throwdown: Big Papa's is putting its money where its mouth is by giving away its baby-back ribs to people who want to try them. To spread the word, we're infiltrating local BBQ-lover groups on Facebook, Twitter and Yelp, including those of competing restaurants, and challenging them to a "Baby-Back Throwdown." People at Big Papa's who use the code words specified will receive a free rib sampler and a coupon to entice them to stay for a meal.

2. Build a database of fans.

Contests and events can not only generate online buzz, but the entries can help build a mailing list. Our plan to build Big Papa's list includes:

Super Secret Supper Society: Forty lucky people will be treated to an all-they-can-eat-and-drink barbecue and New Belgium beer extravaganza, hosted by Big Papa himself - co-founder Frank Alfonso. We hope to entice connoisseurs of barbecue and beer with this evening of decadence called "Beers & Bones." The only way people can get the details is by joining our email list.

Win Big Papa: The big prize will be a party catered by Big Papa. He'll come to the winner's house with his $25,000 smoker and enough food to feed an army of friends. He'll also teach the winner his techniques for making great barbecue. The contest runs for a 30-day period and will be staged on Facebook for ease of tracking entries.