Sam Beaudin, Bryan Birsic and Dave Riess, who were doing well for themselves employed in various roles at tech startups, all harbored an underlying angst. They realized that if the companies they worked for suddenly disappeared, not much would change. The Earth would continue to spin on its axis, albeit with slightly less efficiency in a few niche markets.

This was back in the fall of 2013, and the friends wanted to break out on their own. But they still needed to pick their problem. Despite their heady, slightly crunchy-sounding idealism, the three were obsessively measured in investigating options for their potential startup. During regularly scheduled Google Hangouts, they discussed the idea of overhauling remote healthcare and helping seniors with technology. They conducted field research in both of those areas. Birsic spent days in a nursing home watching folks try to type on touch screens with shaky fingers.

But the trio wanted to think bigger. They decided that they should put their efforts into solar energy. If climate change wipes out humanity, they reasoned, then elderly people won't be texting with their grandchildren anyway.

"My experience with the world is that, the levers of power, if you want to move them, capitalism is a pretty good route," Birsic tells Entrepreneur. "If we thought a nonprofit was the best way to have this impact, we would have started a nonprofit. What we have seen is, the largest Archimedes' Lever that you can get your hands on is a small group of really high-performance people who can attract a lot of capital."

Companies such as SolarCity have circumvented the discouraging high upfront cost for residential solar construction by eating it. SolarCity Chairman Elon Musk decided that he could get Americans to be open to solar energy if they didn't have to come up with $20,000 to $25,000 in installation costs. It worked.

Related: You Can Fly Around the World and Drink Your Own Urine Thanks to the Power of the Sun

"Basically, if you are below a Fortune 1000 company and you are not willing to pay cash up front, you pretty much cannot go solar," Birsic says. It's not profitable for lenders to make small loans for solar installation, especially when they are doing the due diligence and compliance with paper forms. "These guys would hire temps to pound out these mounds of forms. Every damn form is the same. … And we are sitting there like, 'you guys know that software exists, right?'"

Birsic and his co-founders built the solution. 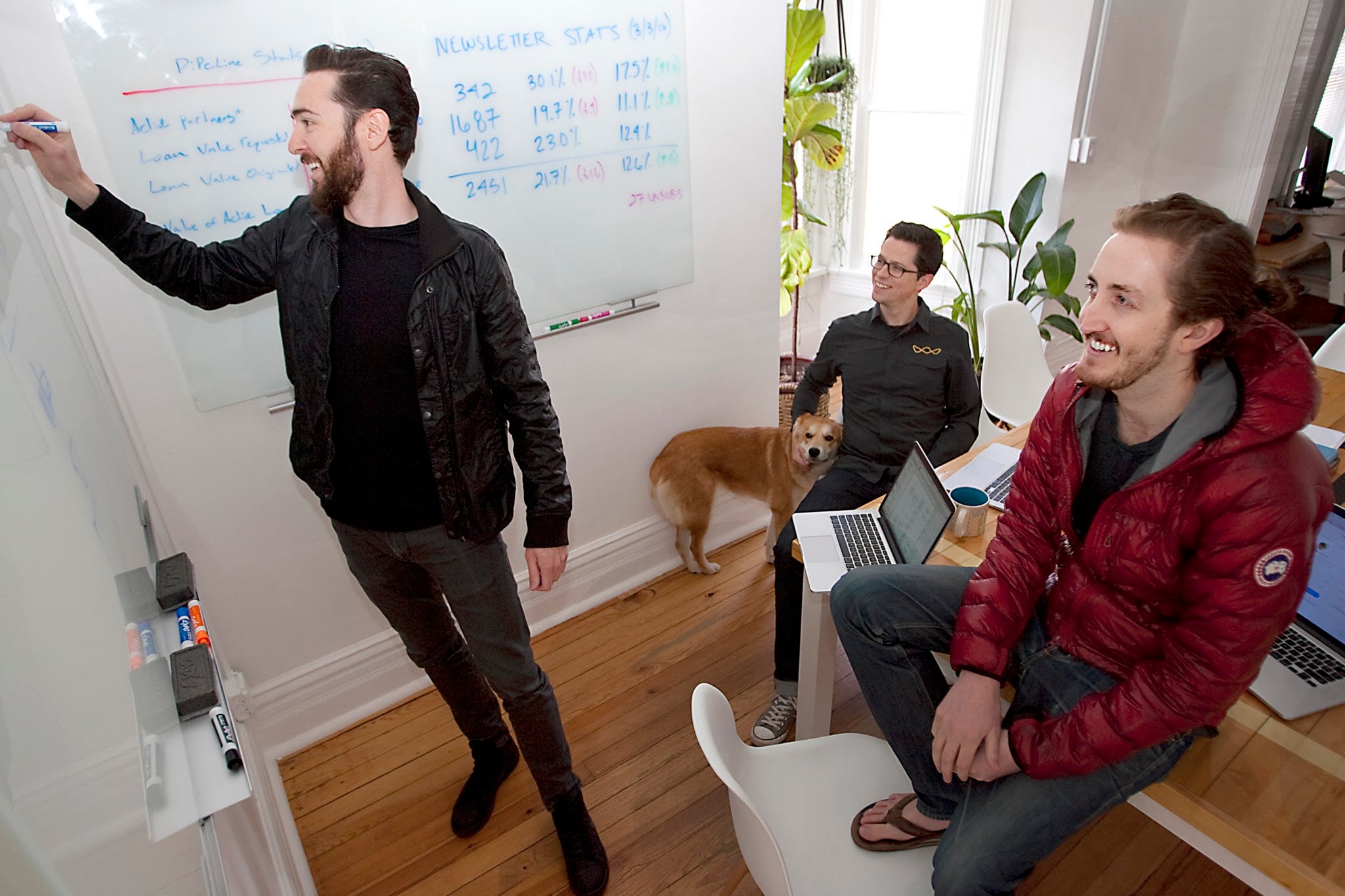 Using algorithms, Boulder-headquartered Wunder Capital automates the process of lending out funds for solar installations with money from individual investors who not only want to see a return on their investments, but also want to contribute to a cause. The idea of collaboratively funding solar is more common in Europe, especially in Germany, than it is here in the U.S., says Ben Compton, a solar industry veteran who currently works as a business development manager at Enphase Energy.

The trio graduated from Techstars Boulder in 2014. Since then, Wunder Capital has grown to a team of 12. It has raised more than $3 million from investors to go toward more than two dozen solar projects. The average loan size is $100,000. Investors are told to expect returns of anywhere between 6 to 11 percent on their investments, and though Wunder Capital can't guarantee those returns due to federal regulations, they have hit their target return to investors every month so far.

As the trio started to investigate solar energy, they learned a few things. First, it's a booming industry. In the first three months of this year, enough solar equipment was activated in the U.S. to power 5.7 million homes, according to the Solar Energy Industries Association, the leading trade group. That's more new energy-generating capacity than coal, natural gas and nuclear industries combined saw in the same time period. The solar industry is on pace to double this year, according to the organization's most recent report.

The dramatically lower adoption rate of solar by mid-sized businesses was exactly where the trio zoomed in. "As an entrepreneur, you are always looking for a pain point that you can go solve," Birsic says. "We want to be the company that unlocks solar for U.S. business. Full stop."

Related: Who Needs Venture Capitalists When You Can Crowdfund?

"I don't have many ways I can personally combat climate change and its ostrich-with-head-in-the-sand skeptics, so investing in alternative energy gratifies an itch in some small way," Andrea McNaughton, an investor in Wunder Capital, writes in a testimonial.

Wunder Capital investors are contemplative, considered and thoughtful. But they are also not willing to give their money away.

"For the vast majority of our investors, the ideological stuff is the whipped cream, cherry on top, whatever analogy you like," Birsic says. "What we don't see a lot of is, "I want to sacrifice a lot of return,' or, "2 percent sounds great.' Most investors want to know that they are making as much as they could elsewhere and they are also doing good. It's an 'and.'"

The fact that Wunder Capital has found a way to offer both a socially beneficial and profitable investment vehicle has caught the attention of some notable venture capital firms. In March, Wunder closed a $3.6 million series A from the likes of Techstars Ventures, Fenway Summer Ventures and FinTech Collective. The round brought the total raised by Wunder to $4.7 million.

Ideally, Wunder Capital is an appealing investment even for those who don't identify as environmental sustainability enthusiasts. Not only is the return on investment competitive, but companies with a social bent have a leg up in storytelling, branding and hiring top talent, particularly of the millennial set.

"Even if you don't care about impact, it's smart to back impact companies because they have these inherent hiring and marketing advantages," Birsic says. "Even you, Mr. Machiavellian, coin-counting Scrooge, you should want impact companies, because they will do better."

Can Wunder really change the world?

Individual investors can't crowdsource enough capital to convert enough businesses to solar to make an impact on the shrinking polar ice caps. To make a large-scale difference, Wunder Capital has to start raising money from institutional investors such as Goldman Sachs and J.P. Morgan. Right now, however, the Wunder team is trying to prove that their concept works with individual investors.

Related: Big Solar Is Leaving Rooftop Systems in the Dust

But even if Wunder doesn't single-handedly stop the climate crisis, it is chipping away at the problem, and that's what matters, Compton says.

"If you have 1,000 firms like that or 10,000 firms like that, for 1,000 or 10,000 projects that they make happen that wouldn't have happened otherwise, then that's a positive impact," Compton says. "And, no one is going to solve it on their own unless they are president of the United States -- and even then they are going to have trouble!"