Wahoo's Has A Birthday Party (And I Get Invited) 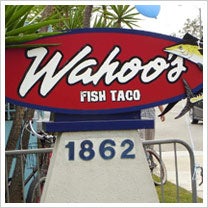 I don't get invited to many special events.

No, no, it's true. I know you think us bloggers regularly win dance competitions and date socialites on and off, and sometimes spend weekends in the Hamptons. But for the most part, that's all just myth. Really cool, awesome myths.

So when Sarah Unke of Echo Media Group invited me to "Wahoo's Fish Taco 20-Year Milestone Event," my breathing pattern changed. I was going to be like a freshman attending prom with a senior. To calm my nerves, I decided to bring along James Park, research editor here at Entrepreneur.

Though I am only 23, I sometimes feel very much out of touch with hip events. Where are my dress shoes? Should I score myself a cummerbund? Do people under 30 still wear bow-ties?

"Should we wear tuxedos?" I asked in my e-mail.

"The event is open to the public, so most will be in casual attire. However, you are welcome to wear a tuxedo. Might I suggest the ever-classic tuxedo t-shirt?" she replied.

But I decided against it. I've seen Step Brothers. Tuxedos don't always work out the way you want them to. Instead, I went for the college professor look: jeans, decent shoes, a button-up shirt and a sports coat. James showed up in shorts, so we looked like typical media: there for free food.

Not only was there free food for starving reporters, but there were a whole lot of Wahoo's fans in the parking lot Sunday morning. It actually looked like a small job fair, with several booths and globs of people scattered around the very first Wahoo's Fish Taco in Costa Mesa. What started as this one fish taco shop on a less-than-noisy street corner in 1988 is now more than 50 stores in California, Colorado, Texas and Hawaii.

Wahoo's Fish Taco, for those not in the four states where it holds locations, is a preferred choice among beach-goers. The menu is a mix of Mexican, Brazilian and Asian cuisine, and the atmosphere is Hawaiian North shore.

It actually took me years to learn that Wahoo's was a chain. As a kid, my father took me to the Wahoo's in Laguna Beach a couple times. And it had the vibe of being its own little world. I thought the cooks might have be the owners. That's how small and detailed everything felt. I thought it was just a cool, little hole-in-the-wall that my dad knew about.

And even at the 20th anniversary this past Sunday, when I spoke to co-founder Ed Lee, he had that same sparkle of Wahoo's being almost a pet project or hobby, not a thriving chain.

"When you first open a taco shop, you're just thinking, 'Flip some tacos, we'll go surf in the morning, take turns in the afternoon.' And then 20 years later, you're still doing it, and it's 54 stores," Ed says. "It's not something you see coming."

Ed co-founded Wahoo's with his two brothers, Wing Lam and Mingo Lee. Though they were young surfers when they started the business, the three brothers were already quite well-versed in restaurant politics. While growing up in San Paolo, Brazil, the three brothers would peel shrimp or wash dishes at their parents' Chinese restaurant every day after school. And when the family moved to Orange County, Calif., in 1975, the parents opened Shanghai Pine Garden Chinese restaurant on Balboa Island.

And Wing, Ed and Mingo have built a good reputation through a local appeal. From their parents' restaurant to Wahoo's, even to college. The thee brothers all graduated from Southern California universities--Wing at SDSU, Ed at USC and Mingo at UCI. They built a strong local network, with family and friends always ready to help out.

"We had a handful of friends that actually came in around 3 o'clock in the afternoon to watch the store, so we could go surf a little bit," remembers Ed. "Most of them weren't employees. They just came to help us out."

Soon, however, the brothers welcomed professional help in 1990. Steve Karfaridis, now partner & COO of Wahoo's, started off as the unit manager of the Laguna Beach location, following years as a consultant to many Orange County's restaurants.

It was just a few years after Steve was brought on board that Ed realized things were really taking off. "After we opened our third store, it sort of became a business," says Ed. "I started having to worry about inventory controls, scheduling people. I mean, we didn't have any of those things in place, so we started having to do that, get up in the morning and meet, actually, to try to organize ourselves."

For Wing, it caught him some years later. "I actually didn't realize it until we were operating about 12 or 13 stores," Wing said in an e-mail interview. "We were a part of a Merrill Lynch commercial and it was a launching pad for Wahoo's. It put our company in the national spotlight. It was then that I realized that the Wahoo's philosophy could 'travel well.'"

And the menu and protocol was set up with that in mind. "We wanted to keep Wahoo's very simple so that anyone of us could handle all duties and make expansion easier, just in case that day came," Mingo said in an e-mail interview.

Throughout the expansion, Wing, Ed, Mingo and Steve developed the business, but were still learning how to do all of it.

"Every couple years, you sort of double-up in size and you go, 'Oh, we need human resources. We need CEOs.' As you grow, you learn, and you fill those spots that you think you need help with," says Ed.

"When working at my parents' restaurant, we worked a number of jobs," says Wing. "Taking orders, busing tables and washing dishes. This was very helpful when opening the first Wahoo's because we had to do all of those jobs ourselves. There were also a few things I had to learn, such as taking inventory, learning how much food to order and how to keep toilet paper stocked."

And now, 20 years after its initial start, there's a big PR event with a line of customers and fans around the corner, complete with Red Bull and Archie's Ice Cream vehicles staked out in the parking lot. The mayor of Costa Mesa was there. Skateboarder Ryan Sheckler was there. Even my old friend Julie was there.

"We used to shower right out here," Ed tells me, pointing over his shoulder to the back lot.

There's a long pause, as it all sounds slightly familiar.

"You know, I'm pretty sure you're living my friends' dream," I tell Ed, recalling how many of my friends surf, rinse off and then have their fill of rice and beans following a good session.

"I'm still living my own dream," Ed says with a small laugh. "I have to pinch myself every day."

But even in an entrepreneur's dream job, there's still work. "In 1988, I would work from 9 a.m. to 11 p.m. at the restaurant, 7 days a week. My jobs included prep cook, cashier, cutting fish. We all did a little of everything," says Mingo. "Today, my schedule is 9 a.m. to 11 p.m. in my office or home office 5 days a week. My job functions are now about strategic development."

Ed and Wing had the same kind of responses. They worked a lot when they started Wahoo's, doing everything from preparing the food to closing the store, and they work hard today, 20 years later.

"I'll go down check out the waves, and if there's no waves, I'm in my office by 8 o'clock. But now I deal with contracts, attorneys, accountants. It's not what I thought it would be. It's 54 stores later is what it is. It's a business now, but it's fun," says Ed. "And we're still surfing."

"I wish I could still be behind the counter. I miss hanging out with our team members and guests," says Mingo.

"To this day, I still take pride in making tacos and then serving them to customers," says Wing. "It has been hard to let go, but with events like the 20 year milestone celebration, I get to interact with guests and enjoy the satisfaction of years of hard work."

And the hard work comes with lessons in entrepreneurship, myths vs. truths. "Myth: Owning your own business is fun. Only if you think working 15-hour days, 7 days a week, and personally guaranteeing all the company debt is fun," says Mingo. "Truth: Owning your own business is rewarding. Just like raising a kid. Once your baby grows up and is a contributing member of the community, you are all smiles."

Wahoo's certainly has been a contributing member of the community.

"The first group we gave back to was the Estancia High School water polo team. Estancia was my alma mater and I learned work ethic and hard-work from my coach. It was only natural to want to give back to the people and customers who helped us achieve success. Today, we work with a number of organizations, including but not limited to: Cystic Fibrosis, Multiple Sclerosis, Juvenile Diabetes Research Foundation and Surfrider."

Some of the non-profit organizations the three brother have served as board members or active supporters of are (and again, not limited to) Share Our Strength, Vocational Visions, Children's Hunger Fund, Humane Society, World Wildlife Fund and Doctors WIthout Borders.

And, after 20 years, the three brothers are still friends.

"You're married to these guys," says Ed. "It's hard, especially with family. You can say things that you wouldn't say to a friend. But I trust these guys because they're my brothers. I mean, I have to see them at Thanksgiving, Christmas, and you can't stab somebody in the back and then have dinner with them. So it goes both ways. It's hard work. As long as you understand that in your four walls, it's going to be this, and outside, it's going to be that, I think you can make that marriage work. If you can't separate those two, don't do it."

"Always remember, keep it separate, no matter what," suggests Wing. "It's inevitable to have differences, but always understand that business and family are two separate entities."

"Always remember to try and not cross the line," suggests Mingo. "Make sure you understand that the hierarchy at work may be different than in the family circle. Don't use family as an excuse to not act professionally."

And then it works.

"My greatest accomplishment in 20 years is that I can still surf with my brothers," Ed says with a smile. "Twenty years doing business, but even better, surfing with my brothers."