When Did George Steinbrenner Take Over Wall Street? 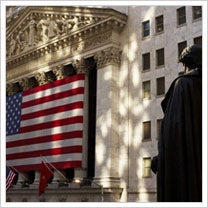 If you need a break from worrying about the economy, I have a solution for you. Not for the economy (though I promise to share if I figure that out), but at least for the worry. How about replacing it with a little good old-fashioned outrage?

A story released this week by Bloomberg News reveals that Merrill Lynch, Goldman Sachs and Morgan Stanley will use about $20 billion from the taxpayer-funded $700 billion government bailout package to provide bonuses to their top producers. Which begs the question: When, as in the case of Merrill Lynch, a company has gone through five straight quarters of losses and its stock is worth 30 percent of what it was a year ago, does that company really even have "top producers"?

That's like paying Alex Rodriguez $20 million a year to play for a third-place team. OK, bad example. But professional sports is the only other arena where you see ownership blow that kind of money on individual performance with no regard for the company's overall results. And at least George Steinbrenner is blowing his own money.

So how do these firms justify this sort of piracy? By arguing that bonuses are essential to keeping the best people at their companies--people whose base salaries range anywhere from $80,000 to $600,000 a year. Excuse me while I get my handkerchief.

The sad part about all this is that while regular people seem to be the only ones who can see how absurd this is, they're also powerless to do anything about it. It's the same sort of reckless, top-loaded economics that got us into this mess in the first place.

Part of the justifcation for deciding to bail these firms out of trouble is that they are the cornerstone of the nation's economy. Isn't it time they started acting like it?