The company has spoken out amid allegations that the company's Spring '23 campaign promoted inappropriate content involving children.

Balenciaga creative director Demna Gvasalia has finally broken his silence amid backlash and controversy over the fashion house's latest campaign which depicted puzzling photos of children and selected props.

"I want to personally apologize for the wrong artistic choice of concept for the gifting campaign with the kids and I take my responsibility. It was inappropriate to have kids promote objects that had nothing to do with them," he wrote. "As much as I would sometimes like to provoke a thought through my work, I would NEVER have an intention to do that with such an awful subject as child abuse that I condemn. Period."

Demna's remarks come jsut days after Balenciaga slammed the production team and set designer from its Spring 2023 campaign with a $25 million lawsuit.

Also are we just not talking abt how the hourglass bag ad was an @adidas Balenciaga collab? You know the one with the Supreme Court document referring to child pornography?
Where @adidas fake apology?
Everyone should be held accountable. You have to approve that. pic.twitter.com/tsMOuWhMra

In one photo, court documentation can be seen on the desk where the Balenciaga bag is placed from the 2008 case titled United States vs. Williams. The controversial case ruled that the "pandering" of child pornography did not violate the First Amendment even if the person charged with such an offense did already possess said pornography to trade.

Balenciaga is now suing North Six (the company that produced the photoshoot) as well as the set designer, Nicholas Des Jardins.

The lawsuit, according to documents seen by The Washington Post, claim that "malevolent or, at the very least, extraordinarily reckless" decisions were made to the set without Balenciaga's knowledge or approval as the company is seeking nearly $25 million in damages due to the now publicly perceived association between the company and the "repulsive and deeply disturbing subject of the court decision."

DeJardin's team told Washington Post that "Everyone from Balenciaga was on the shoot and was present on every shot and worked on the edit of every image in post-production," in response to news of the lawsuit.

Still, many are calling for celebrities and notable figures to speak up and out about the disturbing campaigns and accusations Balenciaga has been facing since last week, seemingly none more than Kim Kardashian.

Kardashian, a muse and collaborator with the brand who starred in its Fall 2022 ad campaign, took to social media late Sunday evening to break her silence on the "disturbing images."

As a mother of four, I have been shaken by the disturbing images. The safety of children must be held with the highest regard and any attempts to normalize child abuse of any kind should have no place in our society — period.

As for my future with Balenciaga, I am currently re-evaluating my relationship with the brand, basing it off their willingness to accept accountability for something that should have never happened to begin with — & the actions I am expecting to see them take to protect children.

Kardashian did not provide any concrete update on the future of her business partnerships with the fashion house.

Balenciaga is in hot water for its latest ad campaign in which its being accused of promoting inappropriate conduct involving children — and now both the photographer and the company have spoken out.

Upon further digging, others on social media noticed that one still shot of a Balenciaga bag on a desk featured a document from the court case Ashcroft vs. Free Speech Coalition, which ruled in favor of virtual child pornography.

A third image showed a red-haired woman sitting on a desk with a view of New York City, featuring a book on her desk by Michael Boerrman which displays nude images of children.

Livid viewers and shoppers took to the internet to bash the company and shame them for their now-viral campaign.

This is criminal & sick. Sexualizing children must be a redline. @KimKardashian - speak out now. pic.twitter.com/lNIdywunlY

Following the backlash, Balenciaga issued an apology via social media. 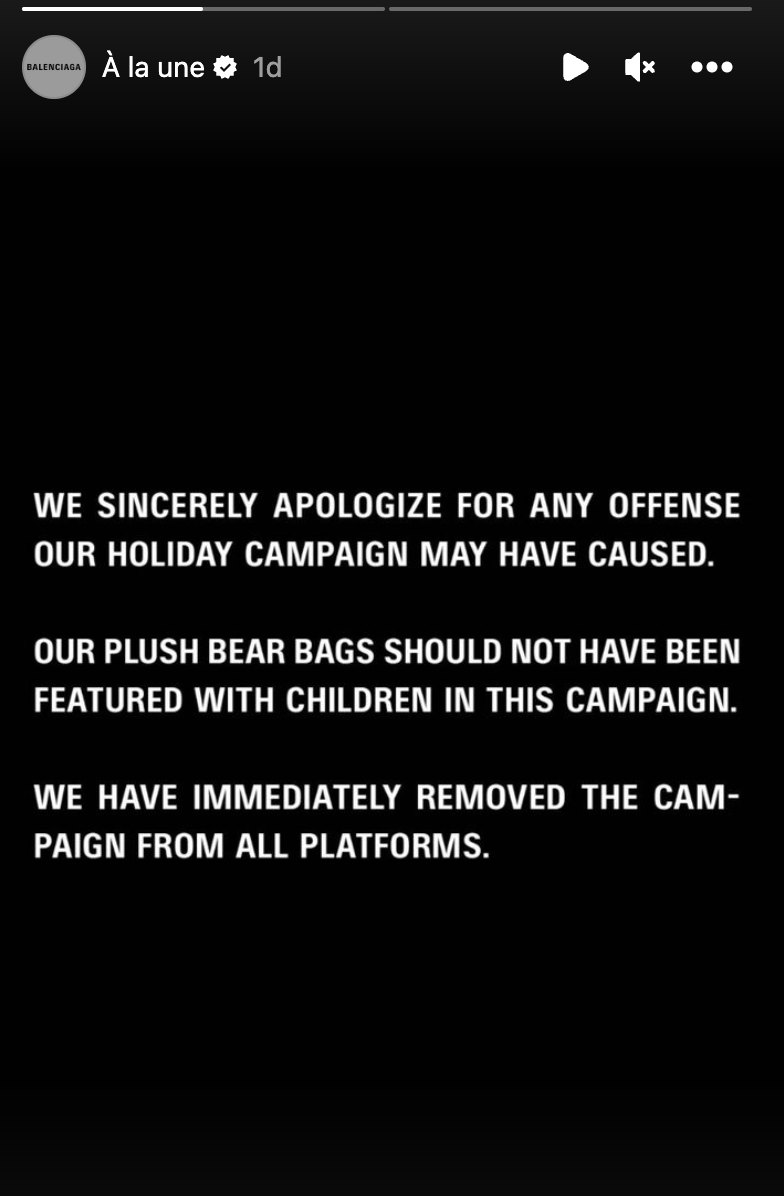 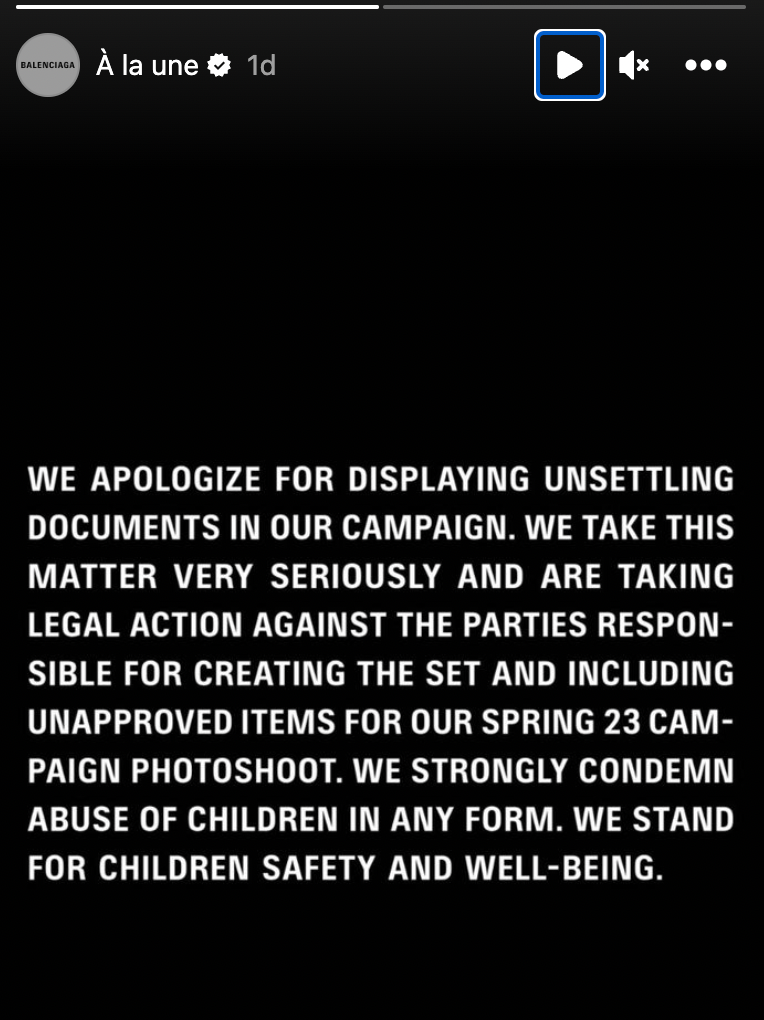 "We apologize for displaying unsettling documents in our campaign. We take this matter very seriously and are taking legal action against the parties responsible for creating the set and including unapproved items for our spring '23 campaign photoshoot," the company's story read. "We strongly condemn abuse of children in any form. We stand for children safety and well-being."

Following Balenciaga's statement, the photographer of the campaign, Gabriele Galimberti, penned a lengthy statement to his own Instagram account attempting to absolve himself from the creative decisions that were made in styling and itemizing the campaign.

"As a photographer, I was only and solely requested to lit the given scene, and take the shots according to my signature style," he said. "As usual for a commercial shooting, the direction of the campaign and the choice of the objects displayed are not in the hands of the photographer."

He also noted that he has been receiving "hundreds" of instances of hate mail and negative messages.

"I am not in a position to comment Balenciaga's choices, but I must stress that I was not entitled in whatsoever manner to neither chose the products, nor the models, nor the combination of the same," he insisted.

This isn't the first scandal to rock the designer this year.

Amid Kanye West's slew of antisemitic rants and hate speech last month, the company announced that it would be severing ties with the rapper after partnering with him on the now-defunct Yeezy Gap line.

"Balenciaga has no longer any relationship nor any plans for future projects related to this artist," Kering, Balenciaga's parent company, told WWD last month.