By Ted Prodromou
September 20, 2012
Opinions expressed by Entrepreneur contributors are their own. 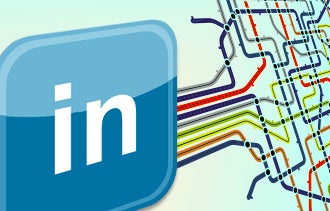 In his book Ultimate Guide to LinkedIn for Business, author Ted Prodromou describes how to best to leverage the networking site as a business tool. In this edited excerpt, the author details the two methods of building connections on LinkedIn.

How many connections should you have on LinkedIn? I'm asked that question frequently, and there isn't a magic number that works for everyone. LinkedIn isn't a popularity contest where the person with the most connections wins. LinkedIn is about building relationships and connecting with others, which is very different than the monologue communication of Twitter.

There are two distinct approaches to networking on LinkedIn. The first, which is used by most LinkedIn members, is called strategic networking, where you focus on quality, not quantity. Strategic networkers usually have less than 500 people in their network and keep in touch with about 100 to 150 people in their network. They have a deep connection with a small number of people.

The other approach, which is often used by sales representatives and recruiters, is called open networking; this is where you cast a very wide net. Open networkers often have thousands of connections in their network because their business is a numbers game. The more people in your network, the easier it is to find someone to fill an open position or outreach customers for a sale. As an open networker, you have a limited connection with a lot of people.

Maintaining a stable social network means we know everyone in our network and maintain regular contact with each and every individual. To maintain a larger social network requires more restrictive rules, laws, and enforced norms, so you are almost being forced to maintain these relationships.

Do you maintain a regular relationship with 150 people? If you work for a medium to large-sized company and count your co-workers, you probably do; if you work for a small company, you may not. If you own your own business, you should be communicating with 150 people regularly to generate leads or find opportunities.

The average number of connections for LinkedIn members is around 60 people, according to a Nielsen study. I see many members with more than 500 connections. When you view their profile you will only see "500+ connections." Once you are connected with that person, you will be able to view a list of their connections and can connect with anyone on the list because you have a second-degree relationship with them. A great way to expand your network is by connecting with appropriate second-degree relationships. Use your invitations wisely because LinkedIn gives you 3,000 invitations, after which you have to request more. It shouldn't be a problem, since you're trying to keep your network manageable.

Open networkers on LinkedIn are often called LIONs, an acronym for "LinkedIn open networkers." LIONs seek to actively increase their connections by sending out and accepting connection invitations. LIONs, in general, accept invites from anyone, so it's relatively risk-free to invite a LION into your network.

Most LIONs take pride in touting their specific number of connections; it's similar to the way celebrities compete to have the most Twitter followers. The majority of LIONs believe that bigger is better, and that large networks lead to more opportunity.

There is no official LinkedIn designation for a LinkedIn open networker. It's an unofficial designation coined by people willing to connect with anyone to grow their network as large as possible. If you want to be recognized as a LinkedIn LION, you can add LION to the end of your name in your profile or in your profile headline.

Being a LION can have its drawbacks. Unfortunately, with any website or online tool that gets popular, people start abusing its popularity. We're starting to see a steady stream of Tweet spam where people are creating thousands of fake Twitter profiles that automatically re-Tweet Tweets from popular Tweeters.

We're now seeing similar tricks on LinkedIn with fake LinkedIn profiles. Beware if you receive an invitation from a profile with no LinkedIn connections, no picture or a company name or logo. It's probably a machine-generated profile or someone who isn't on LinkedIn for the right reasons. If someone isn't willing to provide their name and fill out their complete profile properly, they aren't fit for your network.

This article is an excerpt from Ultimate Guide to LinkedIn for Business, available from Entrepreneur Press.