Engineers Are Developing Tech That Could Make Airplanes More Human

Think about airplanes -- covered in skin. 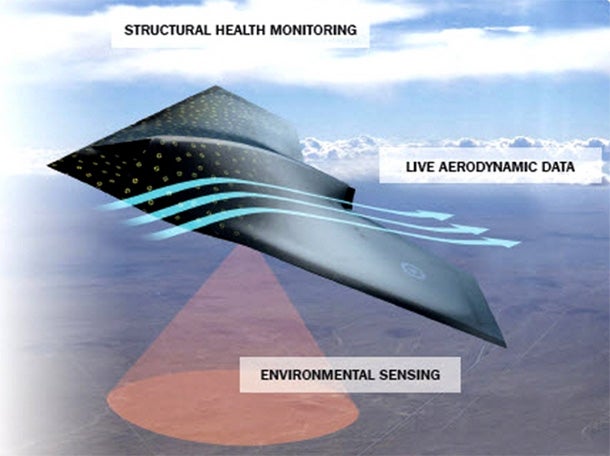 When you get a cut or a scratch, your nerves freak out and tell your brain. In a millisecond, without even thinking about it, you know you're hurt. But, when a plane's exterior is damaged, its pilot doesn't always realize it right away. Or, worse, in time to avert a crash.

It's a tricky problem, but not impossible. Not anymore.

The brains at BAE Systems' Advanced Technology Centre in Chelmsford, England, are solving the conundrum in a seriously cool way -- for military aircraft at least. The British defense contractor says it's developing a human-like "smart skin" coating for airplane fuselages (the central structure a plane's wings, engines and tails connect to). Yes, skin that "feels" when the fuselage gets "hurt."

Related: Yes, You Can Turn a Paper Airplane Into a Smartphone-Powered Jet

It's thought that this synthetic, likely spray-on "skin" will actually sense damage, not unlike Iron Man's killer exoskeleton armor does. Without all the flashy battery packs and holograms and stuff.

BAE's "smart skin," still in concept form, doesn't just feel the "pain." While it can't "heal" itself, it can notify the pilot that damage has been done. Not bad considering the smart stuff will likely be made out of tens of thousands of sensors, or "motes," that BAE says can be "as small as grains of rice and even as small as dust particles at less than 1mm squared."

Together, the self-powered super particles, working with a companion software program and wireless networking tech, will communicate with each other similar to how our skin communicates with our brain. They'll perpetually keep tabs on aircraft conditions and automatically tip pilots off to potential issues -- including stress, heat or other damage -- "before they become significant."

The hope is that the smart skin will replace the bulky, old-school fuselage thermometers, airspeed tubes and other costly instruments pilots rely on. They should also reduce the need for routine ground check-ups and speed up the replacement of faulty aircraft parts.

Sounds great and all, but human-rendered ground checks, are presumably still a good thing. There's still something to be said for highly trained eyeballs and hands, right?

Related: Check This Out: Edible Sensors Tell You When Your Food Has Gone Bad