Before the paint even dried on her new shop in Montreal, one entrepreneur took to the Web to build a community -- and later, a record opening. 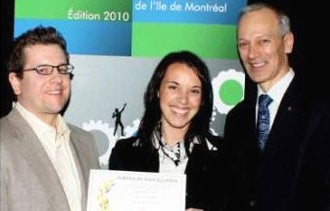 For the uninitiated, the benefits of using social media to launch a business can seem elusive or even scarce. Don't tell that to Lindsay Davis.

Last June when she opened Fait Ici, a general store in Montreal, a line of eager shoppers had wrapped around the store, and teams of media professionals were in tow. She logged about five or six good placements out of the event.

Not bad for a teeny tiny store that sells locally-produced sundries. At Fait Ici, which translates to "Made Here" in French, one can typically find foodie favorites like leafy greens and fresh produce along with products like soap and body lotion. To comply with Davis' mission, the store's inventory must be produced in a sustainable way, use natural ingredients and made in Quebec.

But new shops open all the time and customers -- much less media outlets -- barely raise an eyebrow. So how did she do it? Two little words: social media.

About six months before Davis opened her doors, she started blogging about sustainability, green living and local places and faces. She also used Twitter to connect with influential journalists and food writers. She linked to them, and they, in turn, noticed her. So, when the time came to launch the actual store, Davis had built a community of both interested and influential readers.

It may seem like Davis got things backwards. After all, whetting people's appetites while the meal isn't anywhere near ready can be tricky. Some would-be customers can grow impatient or even angry if you make them wait too long.

But Jason Falls, a social media maven, blogger and author of No Bullshit Social Media (Pearson Education, 2011), says Davis didn't just do everything right, she made it look effortless. "She orchestrated one of the best small business launches ever," he says.

Davis did that by providing content and insights about the issues that she and her prospective customers are interested in, says Falls. Then, when the store opened, Fait Ici became a resource for those same people. That's the key, says falls: "You need to be consumer centric, but also business aware."

How have you used social media to boost your business? Leave a comment and let us know.