How Zombies Became a Social-Media Firebomb

Movies and TV shows like 'The Walking Dead' have taken hold of the nation's imagination. See what you can learn from a zombie. 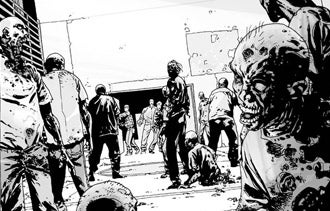 From academic studies about hypothetical zombie attacks to Seth Grahame-Smith's parody novel Pride and Prejudice and Zombies, the living dead have maintained their strangle hold over the nation.

Though seemingly as trendy as they come, the sustained appeal of the living dead has caused many entrepreneurial observers to wonder why and how the trend became what it is and whether it can be replicated.

To figure out why zombies have taken over, I spoke with comic-book author and the executive producer of AMC's The Walking Dead Robert Kirkman. The show, which was inspired by Kirkman's comic book with the same name, has not only delivered a ratings slam dunk for the network, it's also consistently made its way to the top of Google and Twitter trends.

With more than seven million likes on Facebook and close to 300,000 Twitter followers @walkingdead_amc, the AMC show's social-media efforts are alive and well. The network live tweets during the shows, which air on Sundays, and, in season two, it added a new after-show companion program called the Talking Dead, a talk show hosted by popular web and nerd savant Chris Hardwick. Along with the show's guest stars, Hardwick takes questions from online and over the phone. Kirkman is also no slouch when it comes to social media. As the co-founder of Skybound comics, which owns "The Walking Dead" comic-book franchise, he boasts more than 112,000 Twitter followers.

Being the social-media maven he is, Kirkman helped me dissect why the social web loves zombies and what entrepreneurs can learn from the killer trend:

Which social-media strategies worked best for building buzz for the show?
AMC has worked very hard to work across many different platforms be it Facebook, Twitter or the AMC website to produce interesting content for everyone to partake in to build awareness of The Walking Dead. I think they've really put a lot of time and effort into making The Walking Dead an all-encompassing experience for people to watch the show and interact socially. They've got various different apps and all kinds of things that would take too long for me to list but a lot of thought and effort has gone into that and made The Walking Dead a very popular show as a result.

How does a show about zombies go viral? Can that be replicated?
As for the popularity of the show, it's basically the result of taking what's really cool about zombie movies and adding soap opera elements. It's tricking dudes into watching something about emotions. Still, there's definitely something to the subject matter that lends itself to gaining worldwide interest. It's very much about the fall of civilization and people banding together in order to survive. So not only does the theme jibe with many people's fears, it also translates well into social media.

Watch my full video interview with Kirkman on What's Trending: