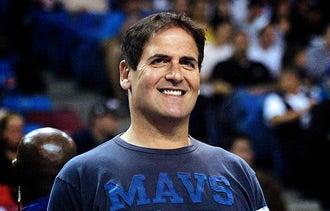 As an angel investor and a star on ABC's reality show Shark Tank, tech billionaire Mark Cuban meets countless aspiring entrepreneurs who think they have the next great idea. So what separates the phenoms from the flops? Among several things, a passion for working hard and blowing their competition out of the water, he says.

Cuban knows a thing or two about hard work and making sacrifices. Shortly after college, Cuban lived in a three-bedroom apartment with five other guys, slept on the floor and ate $1.29 chicken dinners as he worked on launching a hardware and software integration company called MicroSolutions. "It allowed me to stay focused on turning MicroSolutions into a $30 million business."

Cuban is now the outspoken owner of the Dallas Mavericks basketball team and chairman of cable network HDNet Inc. In an email interview, we discussed what's helped him find success in the tech business and how others can, too.

Entrepreneur: What's key to being successful as a technology entrepreneur?
Cuban: Busting your ass. It's not about money or connections -- it's the willingness to outwork and outlearn everyone when it comes to your business. And if it fails, you learn from what happened and do a better job next time.

As I say in my book, "it doesn't matter how many times you fail. You only have to be right once and then everyone can tell you that you are an overnight success."

Entrepreneur: What was the one thing that helped you the most in becoming a success?
Cuban: I was relentless in learning new tech as it came out. If it had anything to do with the PC or networking industry I was on top of it. I bought manuals. I read every book and magazine. Then I would get involved with industry conferences and put myself out there.

Entrepreneur: When did you know you'd made the leap from small-time to big-time? What changed?
Cuban: At MicroSolutions, it was when we had much bigger companies coming to us for high-end technical knowledge and support -- and when I passed $1 million in the bank. That was a nice thing to happen at about age 28 or so.

Entrepreneur: Who is your tech hero?
Cuban: CNN founder Ted Turner. Most people don't see him as a tech guy, but he recognized the value of satellite technology and cable far before most anyone else.

Entrepreneur: What's a day in the life of Mark Cuban like?
Cuban: My days are straight out of the movie Groundhog Day. I wake up, check my email, news feeds and eat. I kiss my wife and kids, and get them to school. I come home and get back in front of my computer. I'll go workout. I'll play with the kids when they come home. I'll sit in front of my computer some more. If there is a Mavs game I check my email at breaks and go to my computer at halftime. After the game, I do the same thing until I go to bed.

As brutally boring as it sounds, I love it and make it work.

An authentic celebration of Black heritage throughout the year can help companies foster understanding and empathy among coworkers from different backgrounds. Such a celebration also allows employees to learn more about their colleagues' experiences, which promotes a deeper sense of community and understanding. How to be a Better Ally in the Workplace During Black History Month — and Beyond.