These Giant Robotic Ants Could One Day Replace Factory Workers

Someday, just maybe, the modern factory worker could be replaced completely by technology. It's a scary thought for some. What's creepier still is that the factory worker of the future could be an ant. Actually, an army of artificially intelligent cyborg ants. Synthetic critters that are smart enough to work together to crush a common goal.

They're called BionicANTs and they can even adapt to fluctuating production demands by wirelessly telling each other what's up. And at 5 inches long, 6 inches wide and 1.5 inches tall (about the size of an adult hand) these buggers are the perfect size for your robot apocalypse nightmares.

Related: The Rise of the Robotic Co-Worker

Inspired by their industrious counterparts in nature, they come equipped with a bulbous plastic abdomen, six strong, jointed legs, two antennae, serrated pincers and faces that appear to be grinning. The ANT part of the ants' name stands for Autonomous Networking Technologies, basically the high-tech stuff that makes them tick. For that extra techie touch, their lightweight polyamide bodies and circuitry were 3-D printed using a laser … because of course they were.

The artificial ants were invented by the brains at Festo, a Germany-based global industrial control and automation engineering firm. For centuries, even dating back to the time of Aesop, ants have been used to teach the virtues of hard work, a fact not lost on the engineers at Festo.

Related: This Traveling Robot Isn't Just a Pile of Junk on the Side of the Road

Festo's aim in building a complex, algorithm-controlled robotic ant army is to use them to "demonstrate how autonomous individual components can solve a complex task together, working as an overall networked system." Translation: These A.I. ants work awesomely together to achieve a shared production goal. 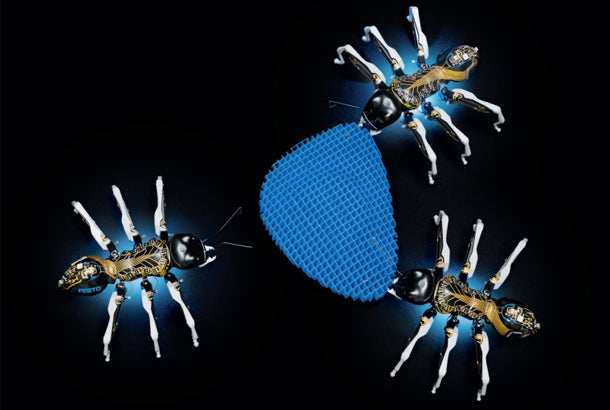 Like their real-world role models, lithium battery-powered BionicANTS are engineered to be cooperative, working for the greater good of the colony, so to speak. Opto-electrical floor sensors, radio modules and stereoscopic cameras enable the ants to figure out where they are and help them locate objects.

The jagged pincers sticking out of their heads allow them to pick up, drag and drop small objects. To recharge, they simply lean their steel antennae feelers against a charging station. Smart, right?

While the ants aren't for sale just yet, their potential uses are intriguing. What if they someday have wings? Will they be able to assemble things? Which industrial arenas could benefit most from them?

To see Festo's bionic ant army in action, skittering in unison, check out the video below:

Related: Your Next Family Member May Be ... A Robot