What Your Keyboard Says About You

Sitting at a corner table in a pub crowded with social media fiends who come together for a weekly networking event, Justin Peer pulled out his Nokia N95 phone and his iGo Stowaway Ultra-Slim Bluetooth Keyboard. He opened up the sleek metal-and-plastic contraption, which was only slightly larger than an index card when folded up, leaned his phone against its small stand and started typing away.

He didn't get far on his blog post, though, before a crowd had formed, curious about his little gadget, wanting to try it out and asking where they could get one, too.

Handing out business cards for his mobile massage therapy practice, Peer says, "I won't thumb type more than a text message, but with this keyboard and this phone, I can do 90 percent of what I do on my laptop."

Often an afterthought, only replaced when carpal tunnel or BlackBerry thumb sets in, today's keyboards are more than just conversation starters; they can be stylish and functional additions to your gadget collection, whether you're looking for a light-and-lean on-the-go option or a desktop workhorse. And today's options go well beyond split-key, sloped ergonomic clunkers.

When buying folding keyboards, like the iGo, expect to pay anywhere from $30 to $150. If they connect via Bluetooth, make sure they'll work with your specific smartphone or PDA. Other features to look for are battery life--many take two AAA batteries, so they are at least easy to keep charged up--and a locking mechanism so you aren't committed to using your keyboard on a flat surface. You'll also want to look for keys that are as close to standard laptop size as possible for maximum typing comfort. And if you like to use a lot of shortcuts when you're computing, look for a nice array of function keys. 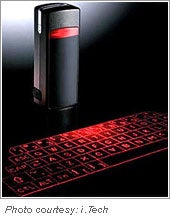 For those who really want to dazzle when on the go, there's the Bluetooth Laser Virtual Keyboard. Slightly larger than a matchbox and with a red laser display that projects onto a table, this space-age-looking gadget will wow, but it may not be for everyone. Priced at $180, it'll make a decent dent in your wallet, and though it makes a clicking sound when your fingers hit its virtual keys, it may be tough to get used to not having real buttons to press. The gadget also has a pretty short battery life, at only 120 minutes of continuous use, and it can only be used on a flat surface with enough space to project the display. If we could integrate this functionality into our phone, though, the company may be on to something. 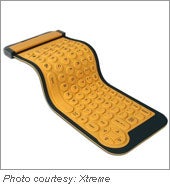 Another unconventional option, roll-up keyboards, get a lot of flak for having hard-to-push keys. But if you have steady fingers and would like a typing pad that won't break or get ruined by spills or crumbs, it's an option to check out. Roll-ups are inexpensive--usually in the $20 to $30 range--they're great for travel since they pack up easily, and they're also good for use in kitchens or other places they're likely to come in contact with food. These require a flat typing surface and come in a range of different sizes, so you'll want to find one that fits your fingers.

If you want something seriously unconventional, check out the FrogPad. This one-handed keyboard is thin, small and light, and throws qwerty out the window. For many people, the device has a steep learning curve, but if you're willing to put in the hours to get your fingers to flawlessly master the FrogPad's 20 buttons, you'll be able to type on the go or while holding items in your opposite hand. The mini $150 keyboard connects with Bluetooth, and it comes in left- and right-handed models. It may prove a challenge, but if you're still hunting and pecking, you could give this gadget a try so you can at least save face for your slow word-per-minute count.

For the really big spenders out there, there is the new Optimus Maximus keyboard from Art Lebedev Studio with a list price of $1,565. This desktop keyboard won't be traveling anywhere with you, but it's sure to impress in the office with its 113 OLED keys, which you can map and paint with any functions and images you like. This massive keyboard is being billed as the way of the future, since it's a real universal keyboard, but it lacks ergonomic comforts--the keys are reputedly hard to depress, and its flat design won't put your hands in any ideal long-term typing position.

When investing in a new keyboard, you want to find one that fits your work needs and your fingers. And though function should be your No. 1 consideration, it doesn't hurt to buy a gadget that'll add to your tech cred. Though if all else fails and you're still feeling like a Luddite, opt for a wooden desktop model for a retro feel. Hacoa even has a keyboard you can assemble yourself.