Basic Underwater Demolition/SEAL training is not known for its “comfort factor.” The six-month selection process weeds out roughly 80 percent of its volunteers, with every day serving as both a test and an opportunity by push them to the brink of mental annihilation.

Looking back, there were quotes that BUD/S instructors would often repeat for two reasons. First, all SEALs have a sick sense of humor, and second, it was another way to teach us how to think (just in case running around with a boat on our heads wasn’t enough) that would eventually mold us into becoming something special.

Here are 10 “inspiring” quotes by BUD/S instructors that every entrepreneur should know.

It Pays to Be a Winner 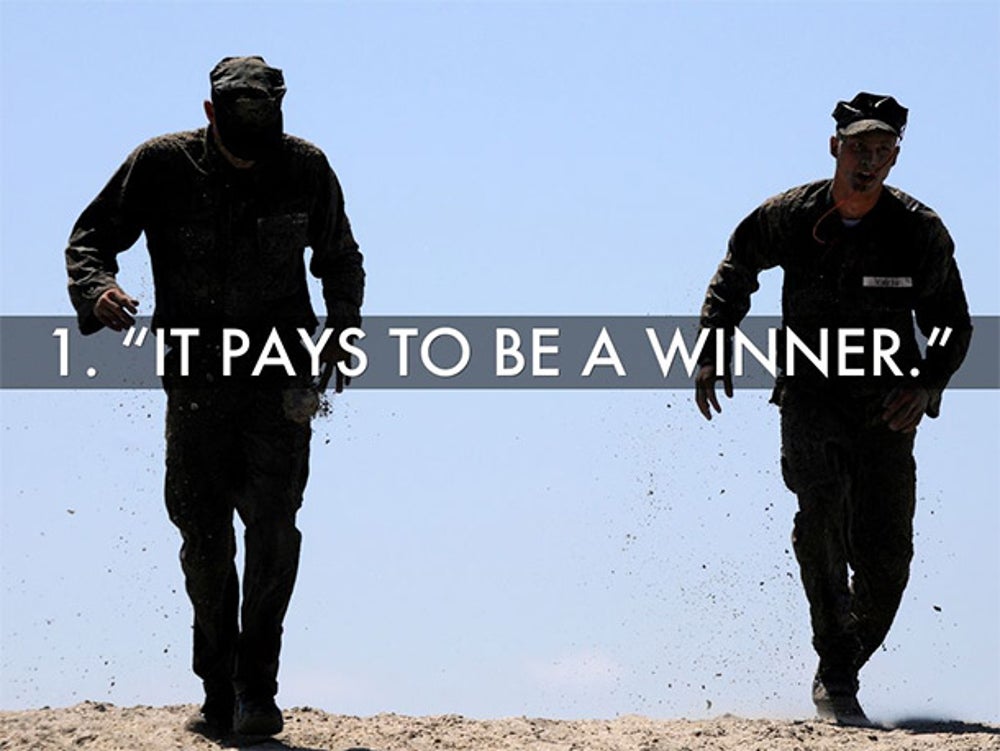 Competition is at the heart of the startup mindset. While monetary benefit can certainly be a motivator, many entrepreneurs pursue their entrepreneurial dreams to fulfill a need for autonomy, financial freedom or to provide a product of unique value.

It May, or May Not, Pay to be a Winner 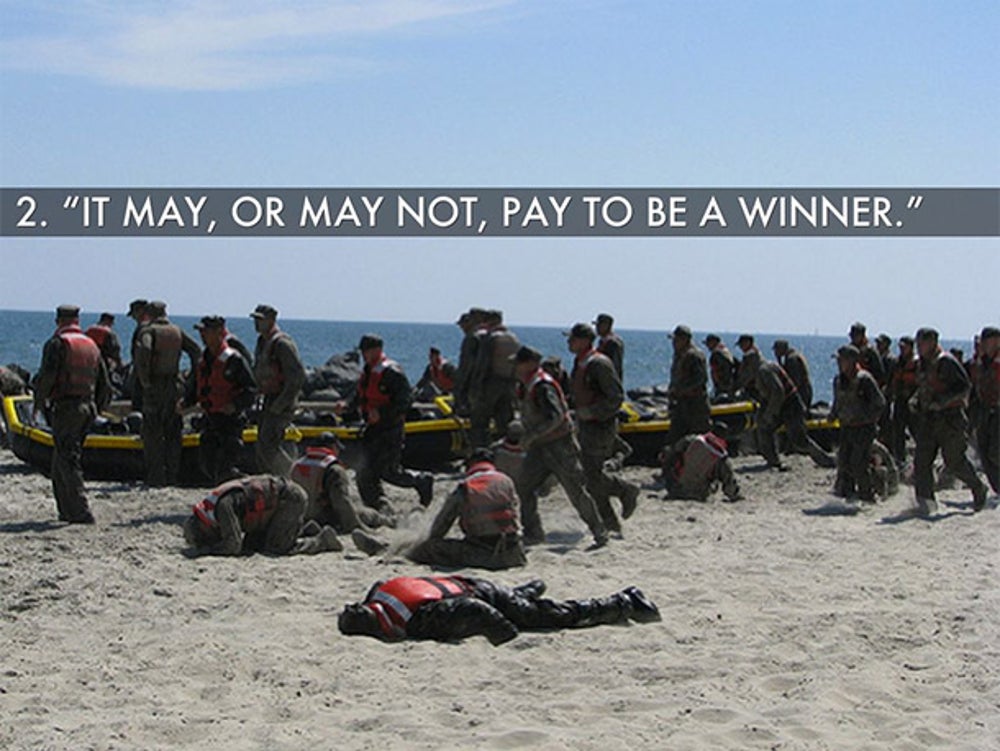 Of course, there's a shelf life to being all in, all the time. Improvement in anything requires the self-awareness to know when to accelerate your efforts and when to just put them in "park." 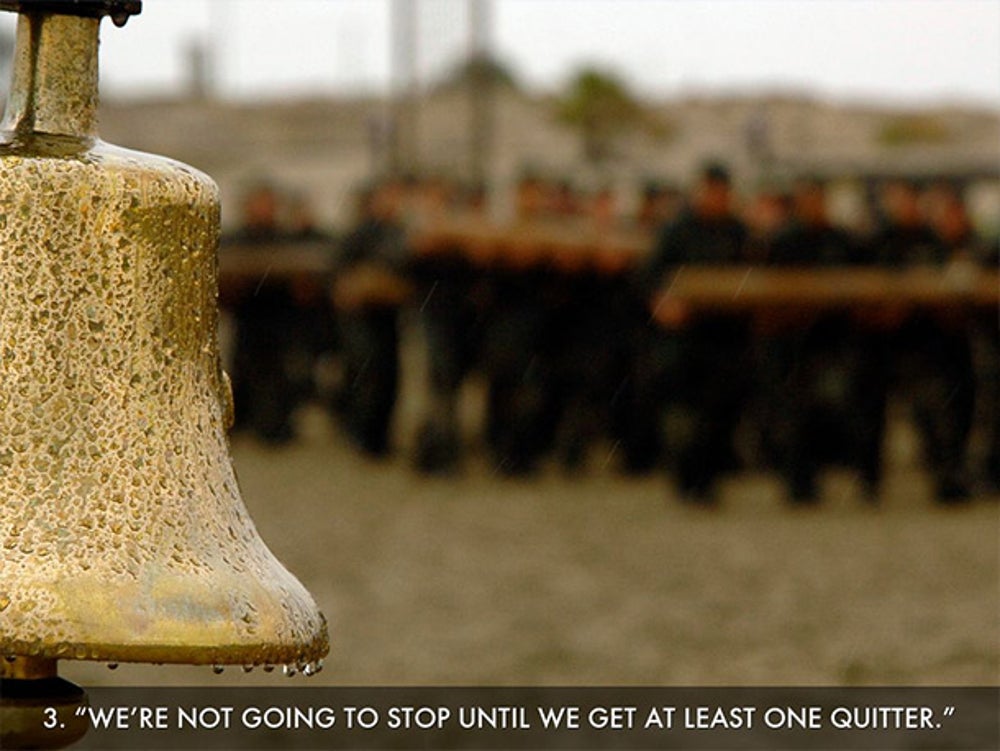 Don't let the wool be pulled over your eyes. Training, learning, and improvement never stop. There is no "end-state," only a "next-state." 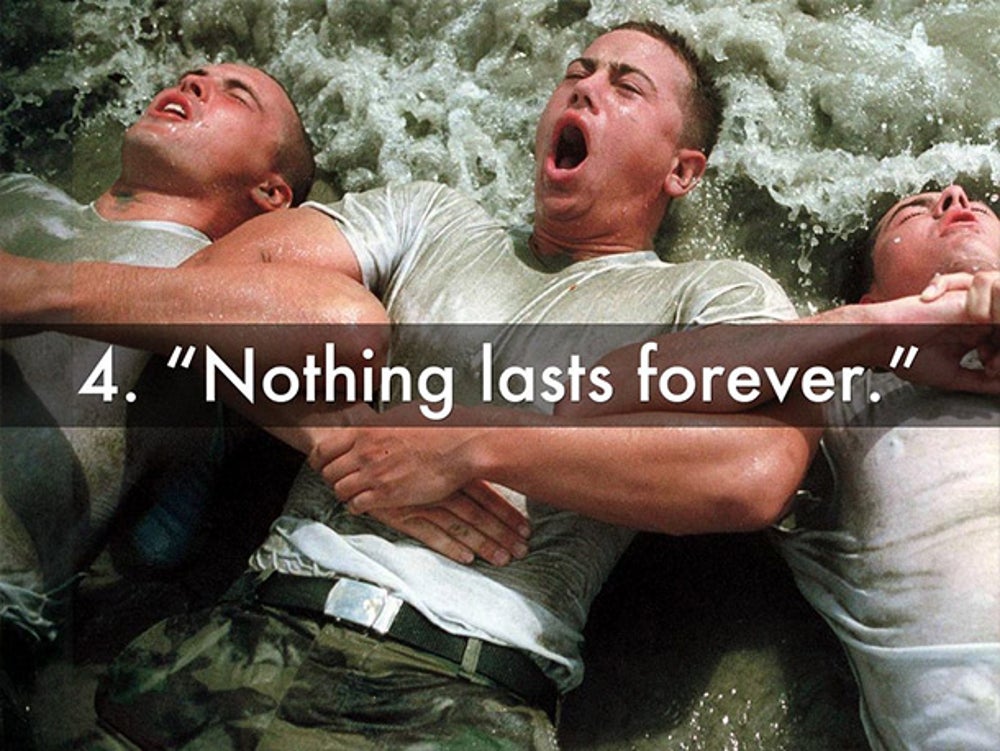 James Allen, author of As a Man Thinketh, once said, “circumstance does not make the man, it reveals him.” Entrepreneurship isn’t an overnight evolution. Success comes to those stubborn few that choose to ignore the temporary discomfort of setback for the long-term strategy of delivering value.

You Don't Have to Like It, You Just Have to Do It 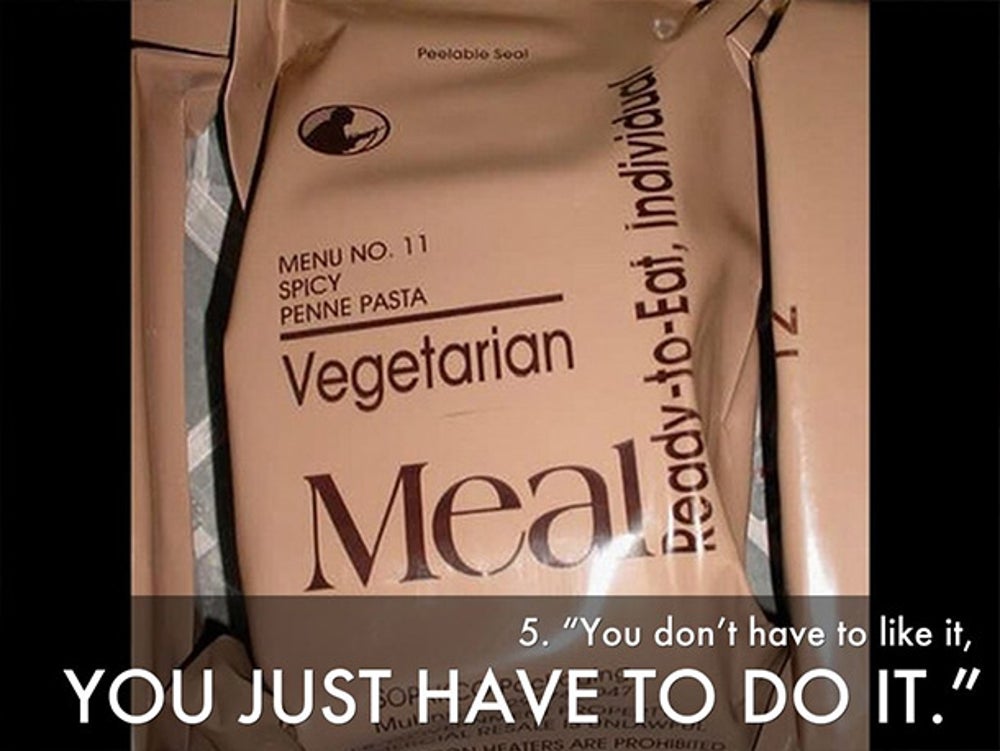 Sometimes you just need to put your head down, grit your teeth and run into the fray. 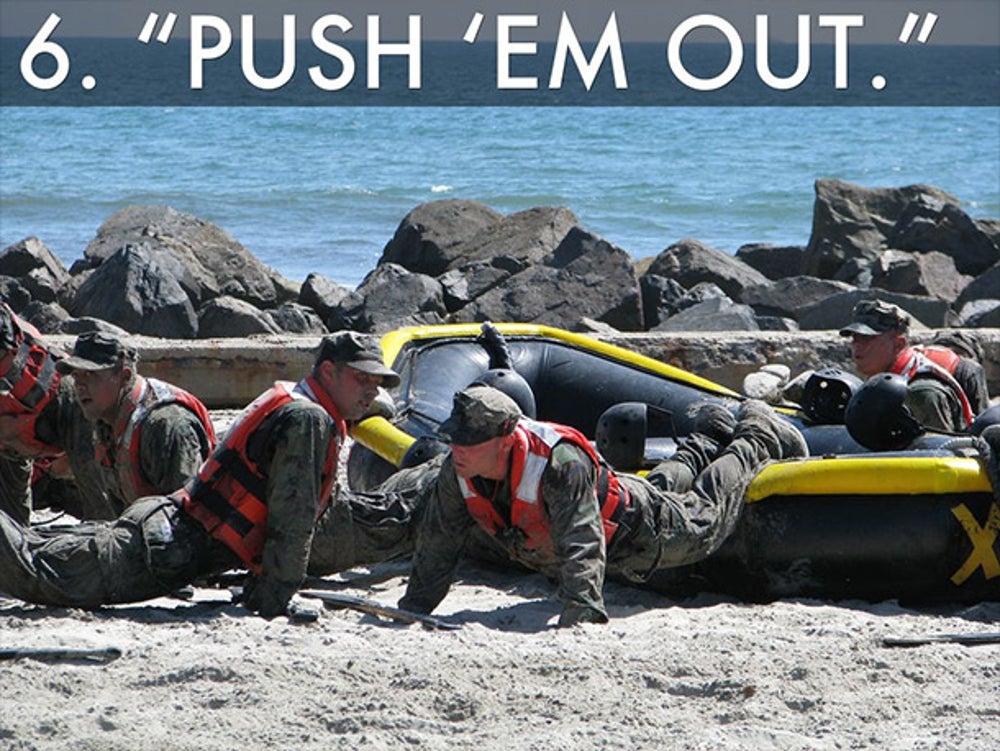 As SEAL trainees, there was a price to pay when we were wrong -- which was always. Whether it's a mistake in armed conflict or in business, there are egos, lives and livelihoods at stake when decisions go awry. Learning from and acknowledging mistakes requires the humility is what separates exceptional leaders from the rest.

If You're Gonna Be Stupid, You Better Be Hard 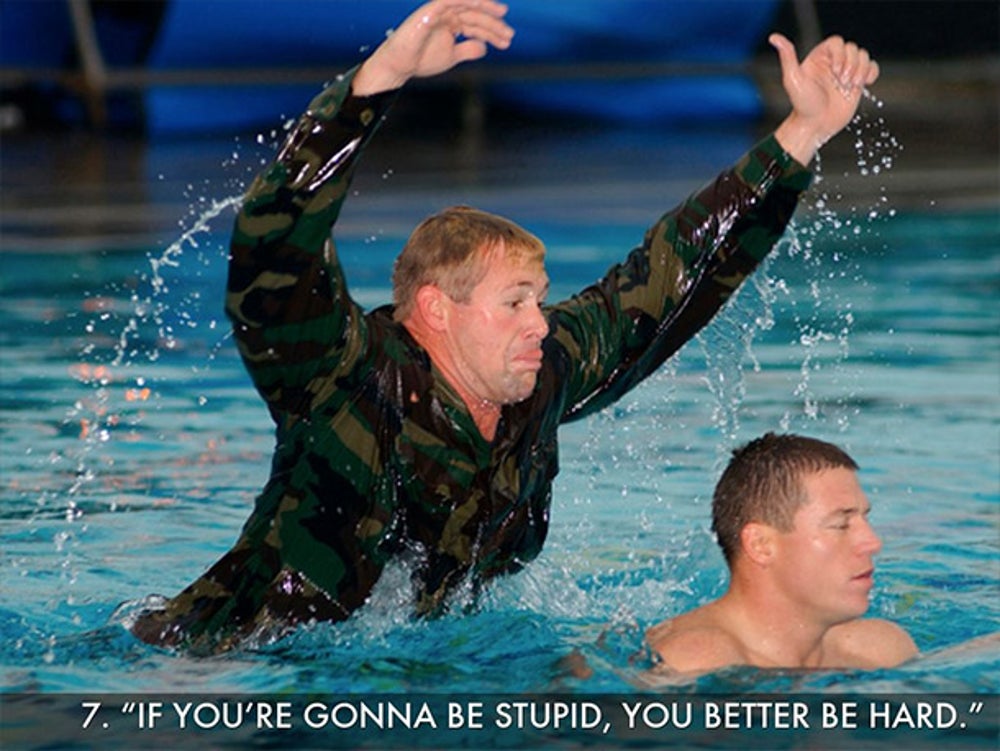 Sorry, but stupid questions do exist, and they typically come from stupid people. As a student going through SEAL training, when -- there was no if -- a student asked a silly question the entire class would suffer. We all live with the power of choice, and if you choose to do "wrong," then be prepared to reap the whirlwind.

In Stephen Covey's bestseller The 7 Habits of Highly Effective People, he speaks of how choice resides within the gap between stimulus and response, and how being responsible for one's actions is more a matter of choosing the thought that will guide your behavior. Bottom line: accept responsibility for your actions and own up to your mistakes.

There Are Two Ways to Do Something ... the Right Way, and Again 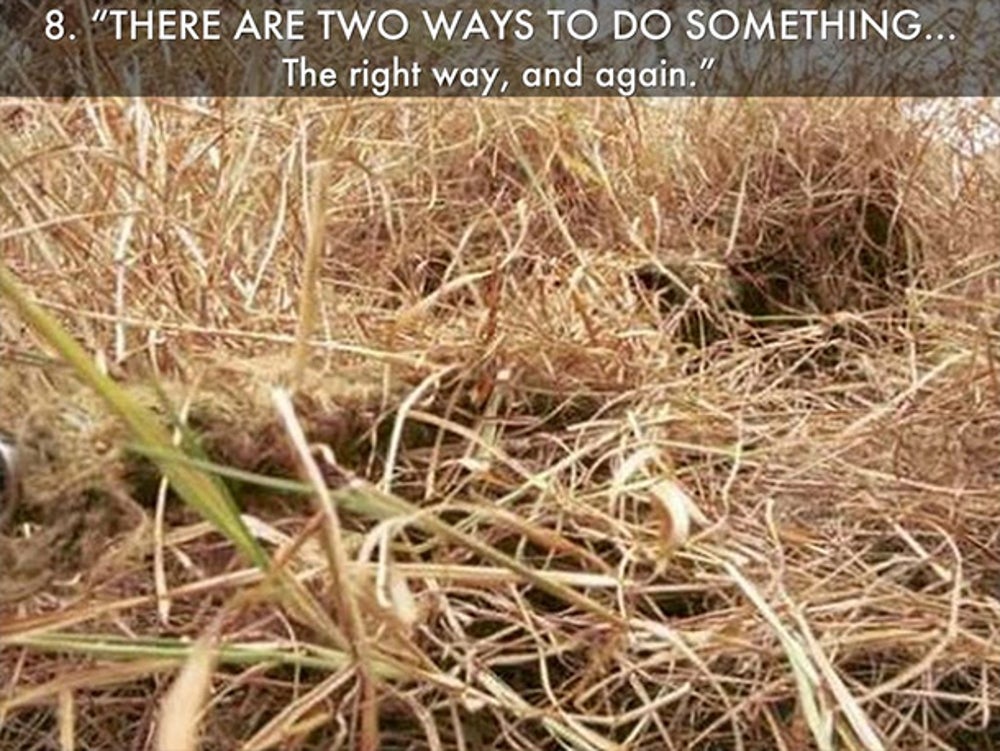 If a particular task is worth your time and energy, then it's worth doing correctly. Sometimes you only get one shot at success. Make it count.

It’s All Mind Over Matter, If I Don't Mind, Then it Doesn't Matter 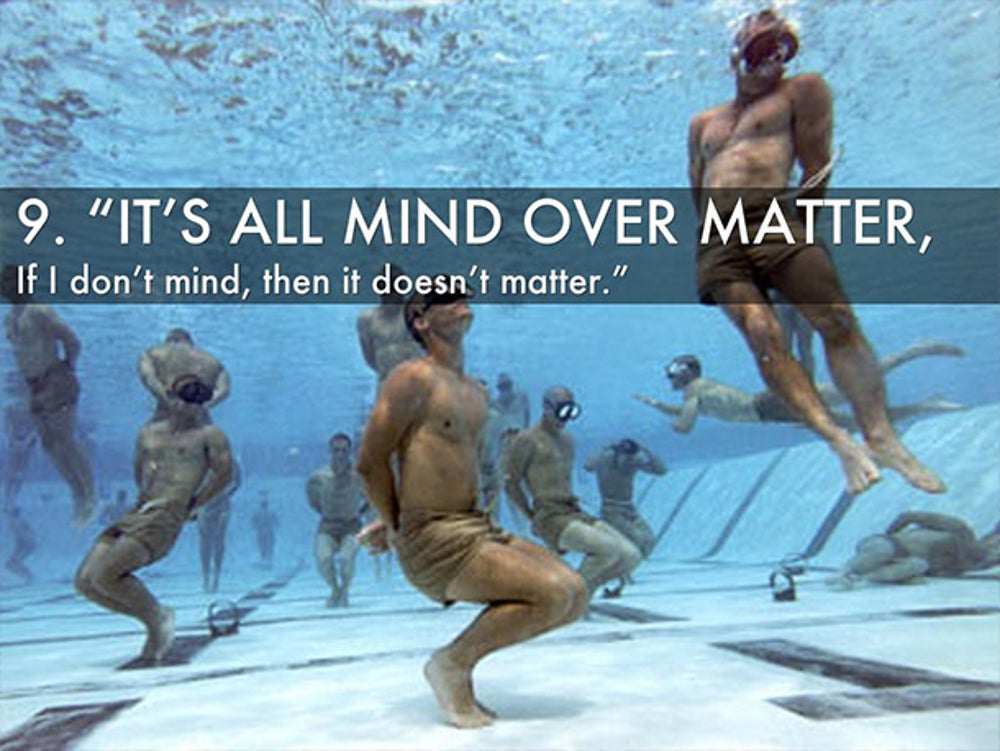 This was something a SEAL instructor often said to us while punishing the class. Entrepreneurs share many traits in common such as independent thinking, blazing their own trails -- going against the grain despite the risk to pursue the passion that drives them. Nothing else to them matters. 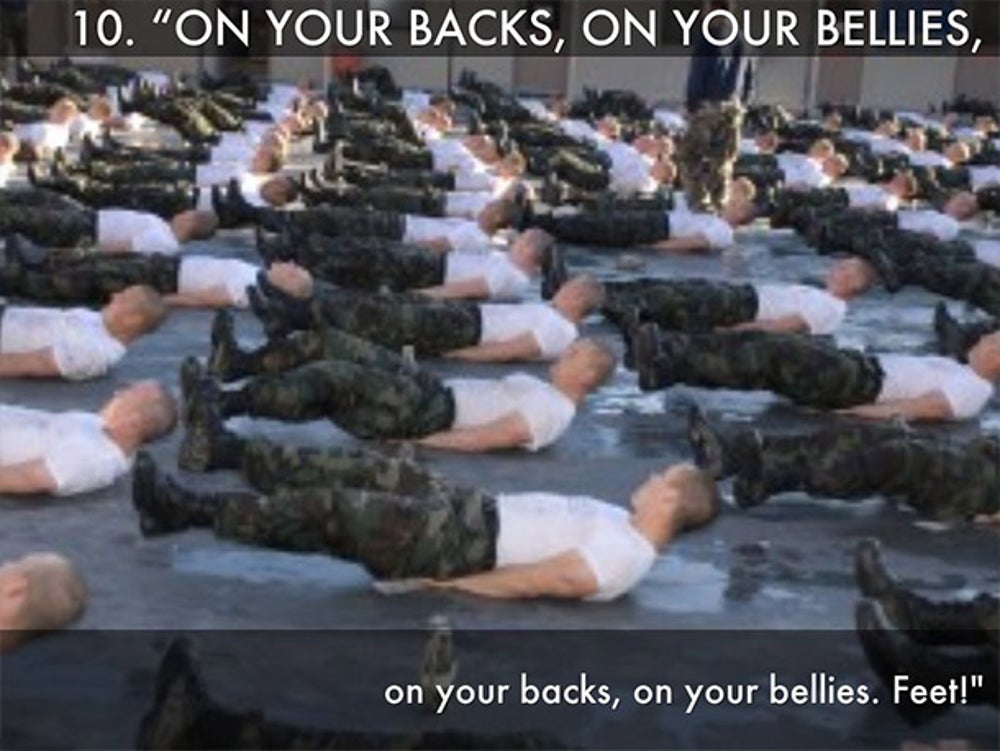 Change happens when you least expect it, and it lasts indefinitely. Preparation won't suffice, but adaptability will. A personal willingness to accept change and to adapt to it is what allows you to flourish in the unknown. Preparation is just the by-product of a willingness to try.

Anybody Want to Quit? 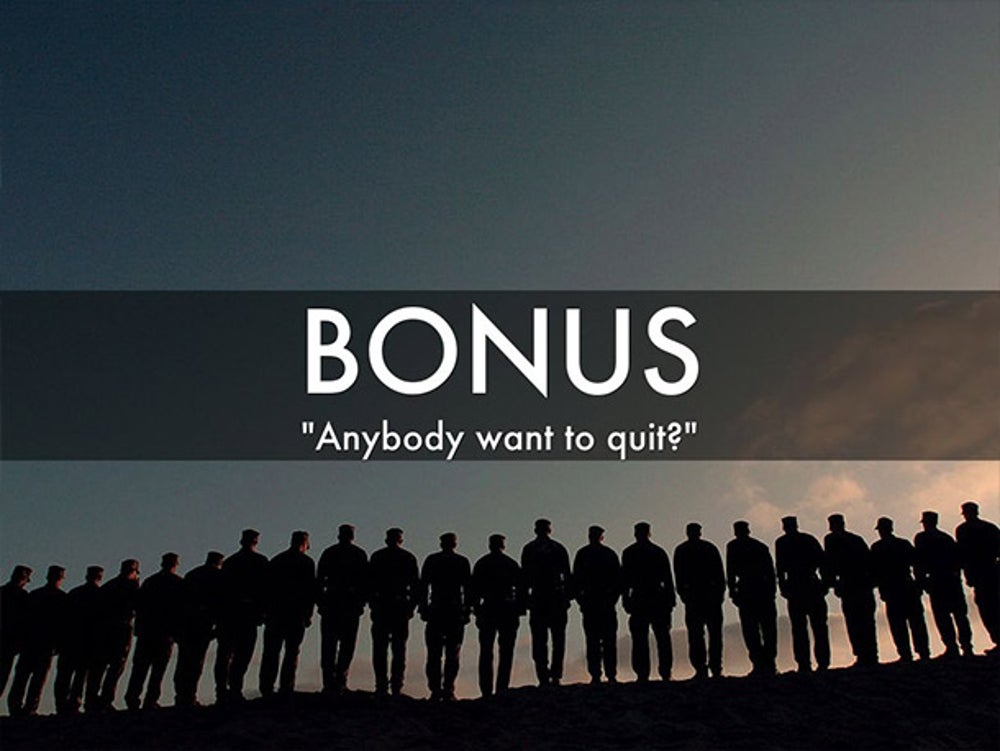