"Star-bursting" and "role-storming" are not Saturday night party games. They're serious methods for coming up with your next great idea.

Virtually every entrepreneur has experienced that "eureka!" moment or reached for the proverbial napkin to jot down a million dollar idea. But what if you can't wait around for inspiration to strike? What if you're not as fortunate as Isaac Newton was with his apple (or Steve Jobs with his)? That's where brainstorming comes in.

Related: The New Rules of Brainstorming

This activity can be defined as the "simultaneous oral generation of ideas." Typically, a brainstorming session in the business world involves a small team -- six people or fewer -- who are encouraged to freely share their ideas, regardless of their position in the company.

In theory, this spontaneous, rapid-fire sharing of ideas by workers opens the doors to creative problem-solving. However, the unfettered sharing of opinion can quickly devolve into chaos if there's no structure in place.

Here, I examine five tried-and-true brainstorming techniques for spurring creativity when you're looking for a solution to an entrenched problem in your startup -- or starting a new business altogether.

The mind map is a visual brainstorming tool conceived by Tony Buzan. Mind maps are useful for both groups and individuals organizing thoughts or strategy behind an idea or question.

When Buzan debuted his concept of the mind map in the late 1960s, he suggested using a blank sheet of paper and colored pencils. Today, there are many online, mobile-friendly alternatives, including MindMeister, MindManager, and Mindly. Of these, I took MindManager's desktop software for a spin, using the hypothetical question: "Should I relocate my business to New York City?" My company produced the following image: 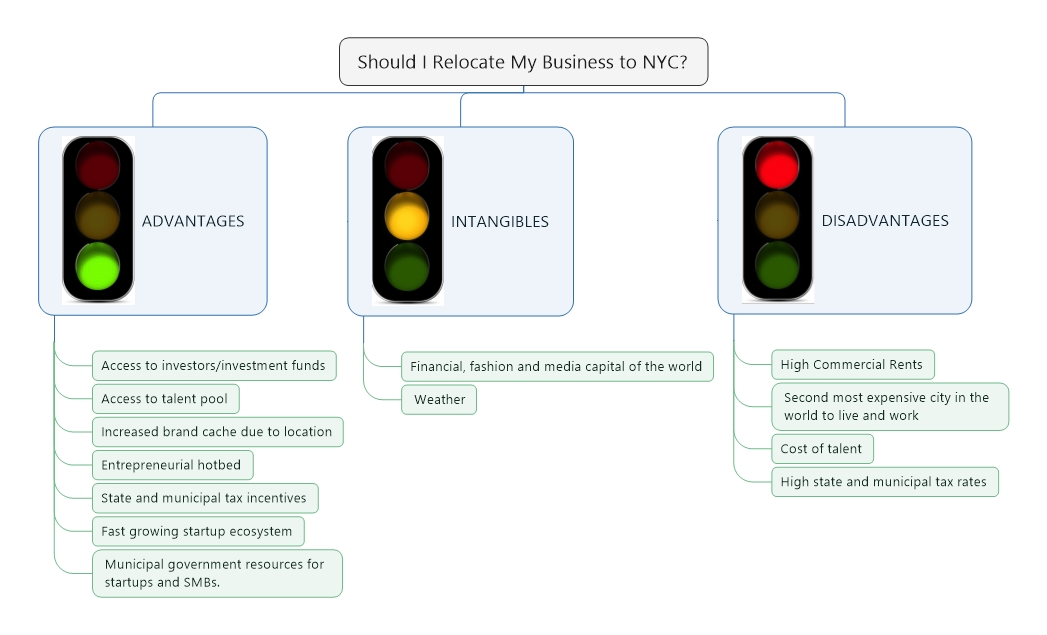 A mind map like this is best suited to solo brainstorming: It's a valuable technique for breaking down a problem or idea into its constituent parts. It encourages you to find the relationships among individual tasks -- and is especially well worth a look if you're visually inclined.

Typically, brainstorming is thought of as a group spoken activity. But what if we've got it wrong? Current research shows that group interactions, like brainstorming, can actually inhibit idea generation. That makes sense when you think about it. While waiting for a fellow team member to make a point, you might miss the chance to express your own flash of inspiration. Group brainstorming sessions are also inherently restrictive, given that only one person at a time "has the floor."

In any group dynamic, there tend to be individuals who dominate the conversation, but that doesn't necessarily make any of them the person with the best ideas. This imbalance in communication can prevent the best ideas from being considered or even heard.

In this context, a Hofstra University study suggested a possible solution: brainwriting. Rather than speaking, individual team members write down their ideas before sharing them with the group. The intention is to engender the simultaneous written generation of ideas.

Depending on the size of your team and what you are trying to achieve, there are many different methods of brainwriting. One of my favorites is the 6-3-5 method. This involves teams of six individuals writing down three ideas each to help solve a specific problem in a five-minute span. Spontaneity is still encouraged, but each team member is given equal opportunity to share his or her ideas.

After each "session" is complete, the 6-3-5 form is passed in turn to adjacent team members, who either elaborate on each of the three ideas or add new ideas of their own. This has proven to be an effective, structured method of generating useful ideas quickly. A video tutorial for 6-3-5 is available here.

Invented at the Stanford Research Institute, a SWOT analysis (strengths, weaknesses, opportunities, threats) is typically used in analysis and decision-making, but it can be a great brainstorming tool as well. Visually categorizing points into the appropriate categories will help flesh out any business concept. SWOT works equally well for individual or group brainstorming sessions.

For the following example using the SWOT method, imagine I am a craftsman starting a luxury leather goods ecommerce business. I'm using SWOT to decide whether to build a Shopify store or utilize Fulfilment by Amazon: 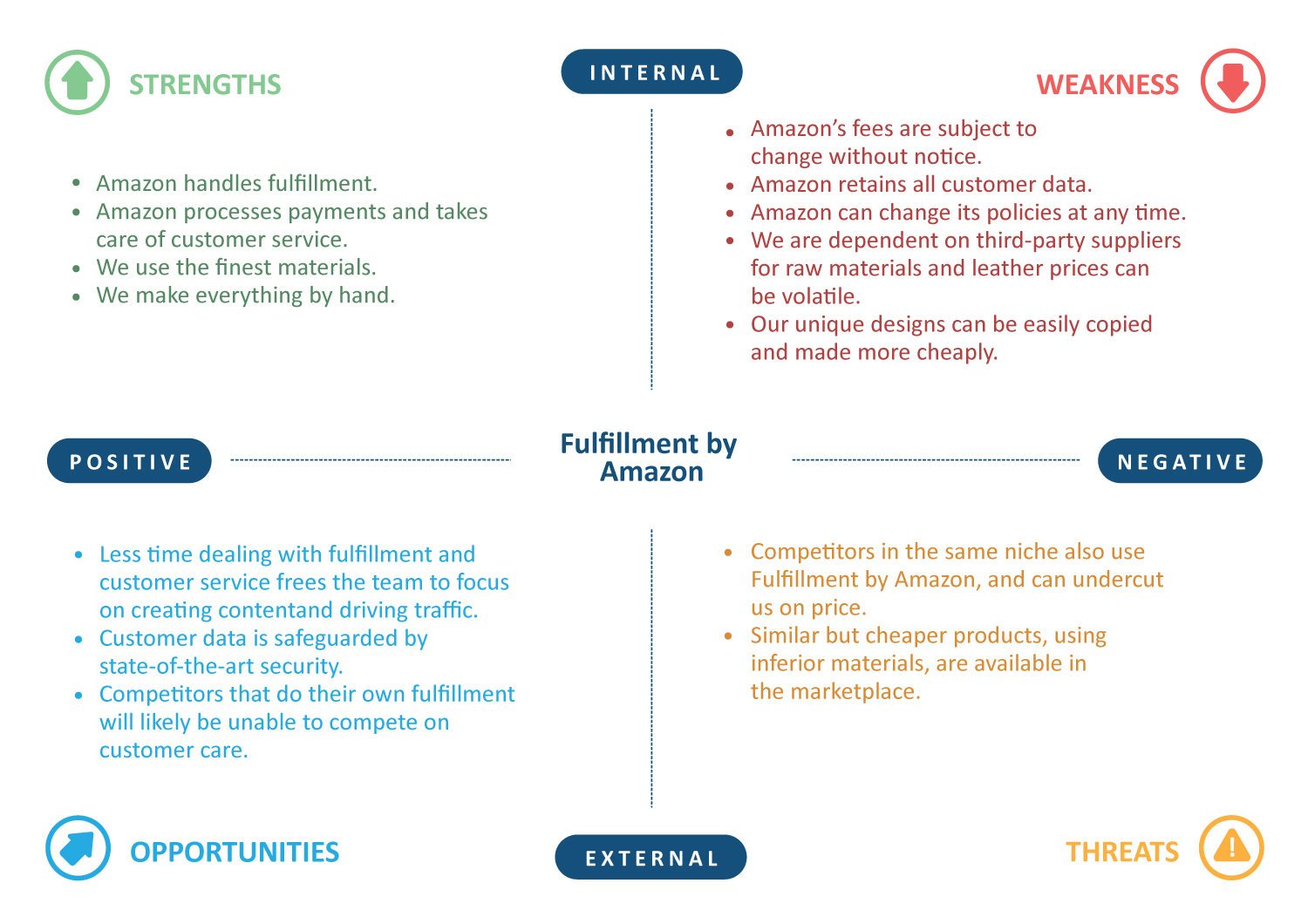 Want to give SWOT a shot using your own problem? Try it out with a blank SWOT form, which can be downloaded here.

As you might guess from the name, role-storming is a group-oriented role-playing technique. Role-storming was developed by Rick Griggs in the 1980s. He found that employees, especially lower-level ones, often felt intimidated by the notion of sharing ideas in traditional brainstorming sessions. For example, a customer-service representative might not feel comfortable sharing ideas in front of a vice president.

Customer-facing employees -- those on the front line dealing with customers day in and day out -- often have extremely valuable insights. Role-storming can help turn intimidation into inspiration. Having team members act out roles different from their actual position frees them to share ideas more freely. This typically leads to rapid idea generation. Plus, it's fun.

Generally, brainstorming is about finding the answers to a question. With starbursting, you work in reverse. The goal is to find the right questions. 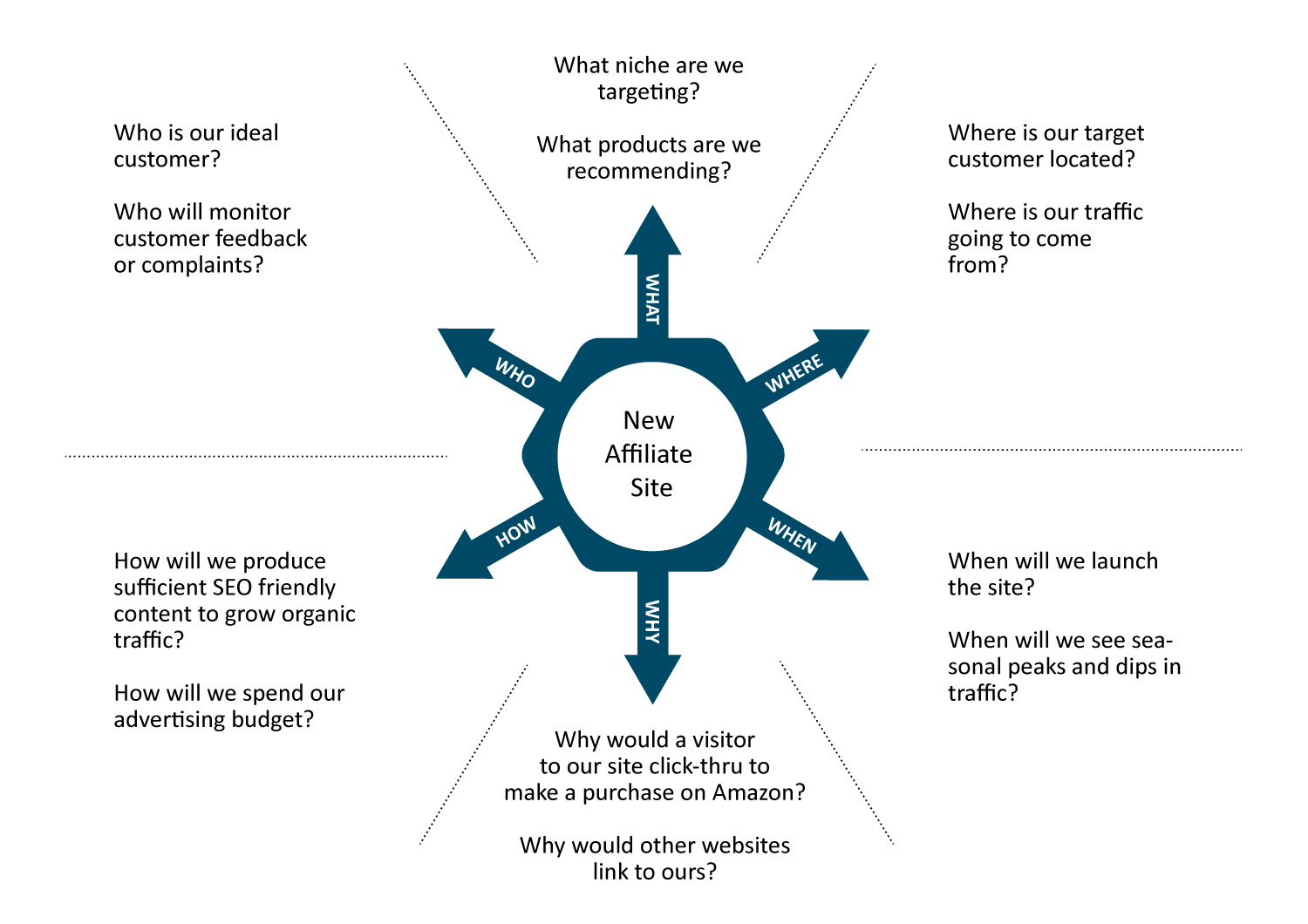 Asking the right questions often gives you more insightful answers. In yet another scenario, imagine you have come up with a brilliant idea for an Amazon Associate affiliate marketing site. Before jumping in, feet first, setting up a blog and writing content, you recognize that it's important to answer all of above graphic's questions fully and accurately.

Starbursting is great for taking a step back and seeing your business model clearly and objectively. It also can be done on either a solo or team basis. So, try it: And don't stop brainstorming questions until you run out of steam. Once you do -- guess what? It's time to answer those questions. You can find a blank starburst template here.

Brainstorming -- either alone or in a group -- is a great way to jumpstart the creative process.

Would-be entrepreneurs dream of hitting upon a flash of genius in the middle of the night. Experienced entrepreneurs, however, know there's no time to be wasted waiting around for inspiration to strike.

After all, even if that flash of genius does strike, the real work has only just begun.

Related: Great Ideas Can Come From Inspiration -- or Brute Force

So, get started on your brainstorming: Consider putting one of the above five techniques to work for you and your team. Pick the one that suits the dynamic of your group -- keeping in mind that role-casting can be great for breaking the ice. If you're looking for some solo inspiration, try a SWOT or mind-map.

Whichever technique it is, you can use it to put the power of brainstorming to work for you -- next time you encounter a daunting problem.