Forget Love: Your Future Co-Founder Could Be Waiting for You Online

By Laura Entis
February 14, 2014
Opinions expressed by Entrepreneur contributors are their own.

Evelyne White was immediately attracted to Frank Ramirez's profile picture. "He was holding a camera in it. I remember seeing that photo and thinking, he's probably a creative type," she says. "There was something about it that said he was a little bit extroverted."

Blonde and girl-next-door pretty, White arranged to meet Ramirez for coffee last March. Her intuitions about Ramirez were right. Dark-haired, with an athletic build and a penchant for rope bracelets, Ramirez was in the process of leaving his corporate position for a job he could be passionate about.

On both sides, there was an instant click of connection, the elusive but immediate understanding that "this person gets me." They talked for three hours. For White, who had exchanged emails with dozens of people and had been on similar coffee sitdowns with at least five of them, she knew she'd found someone special. "I put more cards on the table with him in the first meeting than I had with anybody else."

Almost a year later, Ramirez and White see each other almost every day. They have an easy, casual rapport and share an obvious mutual respect. White is good at big picture thinking, while Ramirez is a deeply knowledgeable technical guy.

Here's the thing: They're not dating. They never were. But as with a romantic relationship, they are embarking on an emotionally daring, unpredictable and often exhausting ride – they're starting a business together. 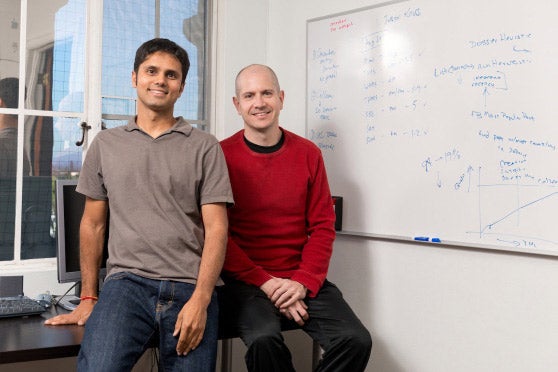 The appeal of these founding stories is obvious -- it gives the successful startup a romantic tinge. Like Romeo and Juliet, perhaps Sergey Brin and Larry Page were fated to meet as and play out their own intense (albeit very different) drama.

Jessica Alter, co-founder of FounderDating, an invite-only matchmaking site for entrepreneurs looking to connect with each other or an advisor, has no patience for those who hang back, waiting for Romeo to find them. If you are serious about starting a business, she feels, it's your responsibility to seek out that perfect partner. "It doesn't make sense for you to say "Either I already know this person or someone else will just introduce me,'" she says. "That's arcane. We don't need to do that anymore."

The first time Bhavin Shah founded a company, the stars aligned; he met his co-founder, Robert Hutter, the "natural way" (the two had worked together years back, and remained in touch). Together, they started a gaming company, Gazillion Entertainment.

The next time around, Shah didn't have time to wait for that perfect storm to brew again. "Some things happen through pure serendipity, but as a second or third time entrepreneur you don't want to leave your life to serendipity," Shah says. "Many successful companies are founded by people who go out and crush it because they didn't wait for something fortuitous to happen to them."

There's a disconnect, Shah feels, between the reality of how many successful startups are formed and the romantic origin myths that get all the attention. He founded Refresh, an iPhone app which creates an "instant dossier" for everyone you meet by aggregating data from their social media accounts, with Paul Tyma, co-founder he met online through Alter's co-founder dating site; he credits the matchup with Refresh's subsequent success -- the startup recently raised 10 million in Series A funding.

Starting a company with someone who, when the going gets tough, simply doesn't have that entrepreneurial itch can be devastating. Dustin Williams found that out the hard way. He tried to start his first company with a friend. They labored for months over their product (a hardware and software package for small businesses) until his co-founder's wife got pregnant and quit her job. William's friend promptly went back to work, abandoning him and their incomplete prototype.

The next time around was even worse. Williams teamed up with another friend who had recently left a job at AutoDesk to start a company that they hoped would provide low cost solutions for rendering 3-D graphics. An experienced engineer, Williams spent nine months building the prototype. The plan was that his co-founder, a business development guy, would shop around their product once Williams finished.

Related: How to Find the Perfect Co-Founder

"He was a longtime friend of mine…'was' being the key word here," Williams says. "He actually contacted me the day before my wedding, and told me that not only could he not make it, but he couldn't come because he needed to start his new job." Williams was stuck with a product he had been working on for months, with no contacts and thus no way to access customers.

Despite the friction that often results from working with friends, there still seems to be a stigma against co-founders who have met online, i.e. the "unnatural way," as David Rusenko, co-founder of the web-hosting service Weebly, recently put it. (He met his co-founders the natural way, at college).

It could even be a deal breaker for investors. Rick Nathan, who served as president and chair of Canada's Venture Capital and Private Equity Association from 2005 to 2012, says he wouldn't invest in a startup team if the co-founders hadn't worked together in some sort of previous capacity. It's impossible, he says, for anyone to know how they will get along when thrust into the intense, around the clock schedule that is required for getting a business up and running. Rolling the dice with a previously untested pair is too big a risk.

Alter, however, insists that aspiring entrepreneurs who turn to websites like hers for help face little backlash from the entrepreneurial community; certainly, they're met with less skepticism than traditional online daters were for years. She does see useful parallels between the two, however. While the internet great at identifying attractive partners, it's less successful at the "getting to know you' part of the process. "I think people tend to think you read someone's profile, say you want to start a company with them and then you just do it," she says. "It never works that way." Like romantic relationships that start on the internet, it's ultimately about connecting offline.

Related: How a Couple Managed to Make It Work as Co-Founders

"I think there's definitely some initial reluctance when it comes to finding a co-founder online," says Shahab Kaviani, CEO of the entrepreneurial matchmaking site CoFoundersLab, where Evelyne White and Frank Ramirez first met. But he's confident that this hesitation will dissipate, much as it did with online dating. "Twelve years ago there was a lot of stigma against it, and now one in six marriages start online," he says. "I know lots of people who are like, 'Hey! I met my wife on eHarmony!' It's not a big deal anymore." He finds the obvious analogy between co-founder and romantic relationships a useful one; its skeleton is essentially the same, just with different appendages. "Instead of caring whether you smoke or not, I care about the corporate culture you're trying to create. Instead of caring about how many kids you're interested in having, it's about: do you want to make it a lifestyle business are you trying to build a big VC company?"

A central advantage to online dating is the comforting knowledge that everyone (or almost everyone – sites like Ashley Madison excluded) is available, and actively seeking a romantic partner. Out there in the real world, it's impossible to know if the cute guy in front of you in line at Starbucks, or the girl ordering a beer next to you at the bar, is already dating. Going online -- where people (at least ostensibly) are single – strips away the need to sniff out availability.

On Kaviani's site, like on OKCupid, everyone is welcome and there's no sticker price, while Alter's site aims to keep the quality of all those involved very high. Like the controversial dating site beautifulpeople.com ("ugly people," it's founder told Business Insider, "need not apply"), FounderDating has a rigorous application process; candidates are asked to submit at least one reference, and the acceptance rate is currently 34 percent. Alter maintains a delicate balance between applicants gifted in business/product/design etc., and engineers. Engineers are always in hot demand, so Alter ensures that they account for roughly 50 percent of accepted applicants. A team of entrepreneurs screen to weed out anyone who is not serious about starting a business (the initiation fee helps with this, too); individuals who are at the stage of simply dreaming about giving up their day job need not apply. "Because we screen, no one in our network is hard up for a job. They have a LinkedIn inbox full of jobs and recruiter requests. We're not a job network."

For Shah, co-founder of Refresh, this was a major upside. Before he joined Alter's site, he turned to his own network to test out potential co-founders. "I talked to some fantastic people. They'd get really excited, and then there first question to me would be: "OK, so what's my salary going to be?" Shah says, incredulous still. "And I'm like, "Gosh, we're having this conversation this early?' Starting a company takes a lot of personal risk, both professionally and financially. There are good days and bad days for every company. The last thing you want is someone who can't really handle that and wants off the ship."

Related: A Guide to Matchmaking Sites for Co-Founders