A new class created by serial entrepreneur Steve Blank puts a focus on testing ideas before jumping in.

By Carol Tice
June 13, 2011
Opinions expressed by Entrepreneur contributors are their own.

Then he talked to potential customers.

"All of them told us they would not buy this thing," Redden says. "They were really happy with the people doing lawn-mowing now, and it wasn't that expensive."

While such feedback from potential customers isn't always easy to hear, testing ideas in the marketplace early can help set up a business for success. It's also a core tenet of a groundbreaking course in entrepreneurship introduced at Stanford this past spring. The class, called Lean Launchpad, throws students head-on into creating a company and tweaking its business model -- making changes called "pivots" -- as they test it in the real world.

Lean Launchpad blows up the traditional approach to entrepreneurship education. Instead of writing lengthy business plans in the classroom, students are charged with developing a viable business concept in eight weeks flat.

"Most startups fail because they need to search for a business model instead of sticking with their first idea," says Steven Blank, the serial entrepreneur and Stanford lecturer who created the course. "This program lets you fail over and over, quickly, until you find a working business. This is what entrepreneurs need to do to reduce the [business] mortality rate."

Lean LaunchPad: The Week-by-Week Course Outline
1. Introduction to all the parts of a business model

2. Come up with your business idea or hypothesis

3. Define your value proposition -- what problem do you solve?

4. Determine who the customer is for your product

5. Find what activities will keep and grow the customer base

6. Develop a theory of what channels you would sell through

8. Learn about resources needed and develop an expense model

9. The teams presented their business plans to the class

Lean Launchpad is based in part on Blank's technology-startup guidebook The Four Steps to the Epiphany: Successful Strategies for Products That Win. The course is coming to the Berkeley-Columbia Executive MBA program in the fall. What's more, Blank has made the curriculum materials available online for anyone to read at no charge.

Harvard Business School professor Tom Eisenmann says the success of the Launchpad format encouraged him to add a new required course to Harvard's M.B.A. program this fall, in which all 900 students will be required to start a business. That's a departure from Harvard's usual business-class format, which centers on business case studies.

"I've learned a lot and I'm shamelessly stealing ideas, with Steve's encouragement," says Eisenmann. "It's fabulous to have him blazing these trails."

In Blank's course, students drawn from both the engineering school and the M.B.A. program formed teams, worked with venture-capitalist mentors, and quickly road-tested their business ideas. The teams were required to blog about their findings and chart their business-plan changes on a single sheet of paper. If they hit a snag, teams could "pivot" their business model and go in new directions based on customer feedback.

In just two months, most of the Launchpad teams went through several business ideas before settling on one in which customer research showed potential.

Though Launchpad wasn't designed as a business incubator, several of the eight student teams plan to pursue their businesses after graduation. The VC-mentors were asked not to offer funding to their teams, but some expressed interest in backing them nonetheless, according to Blank.

"This course was about getting students out of the building and focused on product- and customer-centric questions. We wanted them to ask questions, continuously, and really quickly," says Blank's co-instructor Jon Feiber, a partner at Mohr Davidow Ventures, a venture-capital firm in Menlo Park, Calif.

Redden's Autonomow team started asking hard questions at week three, after customer feedback indicated little interest in its robot lawnmower. Redden says the team hastily conducted more market research, which led to another possible customer: Organic farmers. They were enthusiastic about the idea of a robot weeder, since hiring laborers to hand-weed is costly.

"[The farmers] were asking if they could have it right now," Blank says. "Any time a customer tries to grab the product out of your hand before it's finished, you've got something." 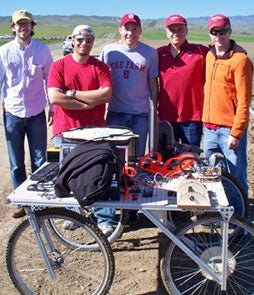 Encouraged, Redden's team worked straight through a weekend constructing a prototype dubbed the Carrotbot, loaded it into a borrowed van and drove more than 200 miles to a central California organic carrot farm to test out the robot and gather data. Post-class, Redden says, the team is incorporating and seeking seed funding to develop the robot commercially.

Other teams also changed course when their early ideas withered in the face of customer feedback. Stanford MBA student Ian Tien says his Personal Libraries team began developing a website which would allow individuals to sell e-books from their own custom bookstore, while paying Personal Libraries for use of the platform. But after nearly six weeks and 700 interviews with Stanford students, the team concluded the business was unlikely to grow to any substantial size.

"It's key to talk to customers a ton," Tien says. "Then, when we saw it wouldn't work, it was like: All hands to the pumps."

After testing out numerous sites that shared information on prices of everything from yachts to diapers, the team's "pivot" was to a platform that offers consumers used-car sales-price information. Pricini is designed to allow customers to see what others in their city sold similar cars for, with the aim of giving more accurate, real-time information than traditional sources such as the Kelly Blue Book. Tien says he and some teammates plan to continue developing Pricini after graduation.

The course's emphasis on early market testing helps keep entrepreneurs from falling in love with their first idea and persisting with it when they should really change course, says Sven Strohband, partner at Mohr Davidow Ventures, who mentored the Carrotbot team.

"Success can be very close by," Strohband says. "Maybe just your approach to market is wrong, or the features are wrong. But you need to test it."

In-House Production vs Outsourcing: How to Achieve the Best Content Marketing Results No Matter Who's In Control