ParkWhiz puts a new spin on an old industry. 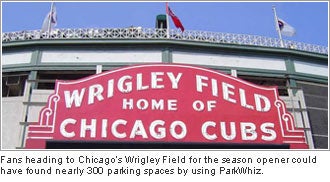 Whether you're a Cubs fan or not, there's nothing like opening day at Chicago's Wrigley Field. In the world of sports, it's a hallowed cathedral and a quintessential urban ballpark.

One problem: it has only one parking lot, so unless you're Elwood Blues, trying to find a spot might have you creating your own Cubs curse.

The people at ParkWhiz feel your pain. And they've come up with a cure that's revolutionizing the parking industry.

"A lot of the inspiration came from personal pain," co-founder Aashish Dalal says. "Anyone who owns a car shares that frustration."

Operating out of Chicago, ParkWhiz is an online service that allows users to reserve parking spots from both commercial lots and private sellers who live near sports and entertainment venues nationwide. Sellers list their open spots, and buyers purchase them by credit card. Of this season's 14 opening day baseball venues, six have parking options listed on ParkWhiz. ParkWhiz takes a 15 percent commission on transactions, so users don't pay up-front fees.

The idea started in late 2006 after Dalal created a wireless device that could help law enforcement detect the presence of a car in a parking space. When he realized how costly the device would be, he and co-founder Jon Thornton decided to take the concept in a direction that was both less complicated and more universally useful.

They started by collecting parking data in Chicago, New York, Boston and other major cities. When they realized just how valuable that information could be, ParkWhiz was born.

"When you look at the parking industry, it's extremely fragmented," Dalal says. "For them, it's just like any perishable good. As time passes and the parking space isn't filled, that's lost revenue for them. Essentially, it's just bringing buyers and sellers together. We're not reinventing the wheel by any means."

In an industry that's remained largely unchanged, lot owners like Jesse Pareja of Millenium Parking are realizing that a little technology can go a long way. Pareja owns the lot and valet service that serves Chicago's Lyric Opera House, which just struck a deal to give its patrons the option to create a reservation through ParkWhiz from its website. So far, he says, the results have been undeniably positive.

"We were able to give people a different method," Pareja says. "Just from that location alone, we're doing 10 to 15 reservations a day. At least half of those were new customers I wouldn't have had if not for ParkWhiz. They come with the peace of mind of knowing they have a reserved parking space."

Pareja says that ParkWhiz has also allowed him to fill previously unrented spaces in his monthly lots, track his business, adjust his rates and even determine what size staff he'll need for a given event based on the number of reservations. Overall, he says ParkWhiz has helped his company get in line with the faster-paced lifestyle his customers want to live.

"It's innovative in that it's something we never even thought of as parking people," he says. "The age we live in now is different. You can't just be like Ferris Bueller and pull up and hand the guy a five. People want to be sure where they're going. They don't just drive around anymore. They want to get stuff done. They want to go where they're going and then go home. Before ParkWhiz, we had never even thought of that."

Dalal is looking to take his concept back toward where it started by partnering with mobile and GPS providers so consumers will be able to locate open parking spots on the fly. In the meantime, he says, ParkWhiz will strive to create the best possible experience for its 20,000 monthly customers with a system that is divided between being part of the future and being tied to its very low-tech roots.

"When we first started, we thought, 'How did we come across the parking industry? What an unsexy industry,'" he says. "We realized we're part of a bigger scene. From the consumer's perspective, it should all be one seamless experience. That's what we want to create."

Though it's an online company, Dalal says he'd prefer to avoid having ParkWhiz lumped in as just another web business. At the end of the day, he says, he's just helping the guy standing on his driveway and the guy circling the block find each other.

"When we talk about the parking industry, internet people think we're talking about domain registration," he says. "Once we explain the concept to them, that's when their eyes light up. Explaining it to people really helps us refine our model and gives us a laser focus. Our goal is to bring ParkWhiz to consumers, but we're also providing a competitive advantage to parking facilities. If we can help them increase revenue with technology and make their business more efficient, then we're really more of a traditional company."