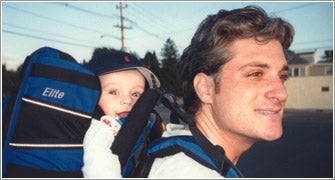 Night light: Many go in search of the next big idea. For Gary Goldberg, the idea gripped him night after night until it couldn't be ignored. After numerous late-night trips to the emergency room, his 4-year-old son was diagnosed with allergies related to dust mites. Goldberg did some research and discovered that dust mite waste occurs in bedding naturally, and that 70 percent of the allergies Americans suffer from are related to this waste. That was when his idea to create allergy barrier bedding products fully took hold. "I didn't have a choice about whether I was going to do this or not because I think about this all the time," says Goldberg, who invested several million dollars into the business. "I am obsessed with it."

Put to rest: Though not the first to come up with the idea, Goldberg aimed to do it better. The products available were either made of uncomfortable materials that couldn't be laundered or of cotton with pore sizes too big to be effective. Born to a family of textile scientists, Goldberg drew on his background in that industry and, after a year of experimentation, created a waterproof, breathable fabric that did it all. In 2006, CleanBrands, featuring MicronOne Technology, was born.

Dream come true: Since July, CleanBrands has reached new heights by selling pillow and blanket sets to JetBlue, which uses them for its 550 flights per day, garnering massive in-flight exposure for CleanBrands. By developing different brands at different price points, Goldberg has also been able to secure shelf space at Bed Bath & Beyond and Wal-Mart.

Follow his lead: Secure your niche by raising the bar.

What is your secret to success?
Goldberg: Authenticity. My dad said to me: "You got to be honest with what you do. Every day, you're going to wake up and you're going to look in the mirror when you shave, and you have to deal with that person you're looking at." Everything I do is authentic and true. And if it costs more, I'm going to have to charge more, and I'll have to convince people to pay for it. But what I'm not going to do is make fictitious or false claims or promises, because in the end, we should have a guidepost for consumers, and that's authenticity.

What advice would you give other entrepreneurs?
Goldberg: The easiest thing that can happen to any entrepreneur is to lose faith or lose belief because of nonacceptance. Everything that I have ever started in my entrepreneurial career has been mocked at onset. People would say: "That's ridiculous. What do you think you're going to do? Why would anybody want that?" If you believe in it, rationalize it, go back to it and rework it. It can happen.

When did you know you'd "made it"?
Goldberg: I will never know I made it because I will never stop worrying. I will never stop pushing for improvement and greater achievement. When that happens, I'll know and I'll say, "Well, maybe it's time to go open up a coffee shop or something." But I don't think I've made it.

What was the first toy or reward you bought for yourself when you became successful?
Goldberg: I like guitars, and I have a couple of really nice ones [he bought a 1957 Gibson Les Paul Jr. in white], but generally speaking, I'm a pretty modest person. I don't have luxury boats or houses.

The 4-Day Workweek Could Soon Become a Reality