Roaring Reinvention: How a Grandmother Started a Motorcycle Shop

A Florida woman is sharing her passion with other adventure-seekers.

By Vivian Wagner
April 29, 2011
Opinions expressed by Entrepreneur contributors are their own.

For Kathy Tolleson, motorcycles are an empowering symbol of freedom and adventure.

"I've always loved motorcycles, from the time I was a little girl," says Tolleson, a quick-talking and agile woman who grew up riding in rural northern Minnesota, where she was born and raised. Her father, who always had several types of vehicles around -- pickup trucks, snowmobiles, go karts -- brought home a Honda 50 motorcycle when she was 10 years old. She was hooked after the first ride.

Little did she know more than four decades later she would turn her passion into a roaring business that would help spread her independent spirit to a new crop of women riders. 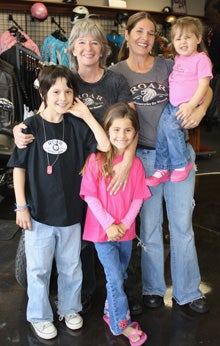 In 2008, the grandmother of 13 founded Daytona Beach, Fla.-based Roar Motorcycles for Women, which offers customization services and sells motorcycles designed exclusively for women. The official business launch took place during the beach town's annual Bike Week, a popular event that draws thousands of bikers from around the country. Tolleson, now 57, had been taking part in Bike Week festivities since moving to Daytona Beach about 23 years ago.

Roar was started with a $500,000 line of credit from Tolleson's bank, which leveraged the personal equity in property she owned with Rodney Tolleson, her husband of 26 years. The business was based on a leap of faith, as well as some sparse statistics that appeared to indicate a potential customer base.

The Motorcycle Industry Council, for instance, found in a 2008 owner survey that women accounted for about 12 percent of motorcycle ownership in the U.S. that year, up from 9.6 percent in 2003. Yet, few businesses appeared to be catering to this growing group of adventure-seeking women. Tolleson and her husband set out to change that.

"I saw so many women riders struggling with their bikes," says Tolleson, who raised five children and played a supporting role in her husband's previous businesses, which ranged from consulting for chiropractors to owning a closed-circuit TV network. Now it was her turn. 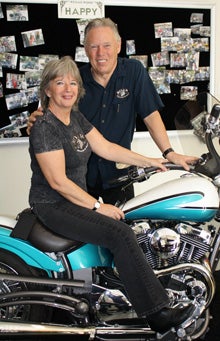 "I've been a business consultant and entrepreneur all my life," says Rodney Tolleson, who serves as a consultant to Roar. "When she came to me with this idea, I thought, 'This is it. This is a winner.'"

The seven-employee company customizes bikes that women already own and creates one-of-a-kind designs by motorcycle builder and designer Gary Lyons and airbrush artist Fern Gadd. Some of the colorful custom conversions have whimsical names like Deep Purple Ice and Root Beer Float.

"Our bikes all have personalities," Tolleson says. "Our job is to sell a bike to a woman who may never have considered it. We present motorcycles in terms of fit, style, and beauty to make them more attractive to women."

To do that, for example, Tolleson will take her sales staff to department stores in search of inspiration. They'll examine how shoes, clothing, and jewelry are displayed in order to attract women -- then head back to Roar's showroom and try to replicate the allure. 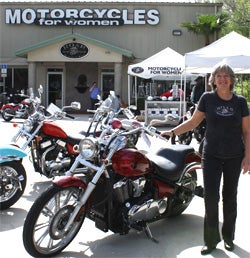 "I wanted bikes put out in terms of symmetry and colors," Tolleson explains. "Women's eyes notice when [colors] go together."

This attraction to color and design is apparent in the purchases of clients like Maria Avallone, 63, of Ormond Beach, Fla., who bought her bike, Wild Rose, a deep pink Yamaha V-Star decked out with painted roses, from Roar in 2009.

"I loved it," Avallone says. "It was just so beautiful."

That sentiment appeared to be reflected in Roar's sales as well. The first year revenues totaled $700,000, according to Tolleson. During the dark days of the recession in 2009, revenues held steady, and in 2010 they were up 10 percent. Since its opening, the company has fitted and customized more than 300 motorcycles and sold more than 200 theme bikes, with customers from California to New England. When women bring their own bikes in to be customized, the price can range from $3,000 to $10,000. They can also buy custom conversions and one-of-a-kind bikes, which retail from $10,000 to $25,000.

Tolleson, though, dreamed of manufacturing her own bikes designed exclusively for women. And so, during 2009's Bike Week, she launched a brand new motorcycle she helped design: the WildKaT, retailing around $25,000, featuring a Harley-Davidson engine and a low center of gravity, so the weight of the bike is low to the ground and easily maneuverable with the hips and legs, which in women are typically stronger than the upper body. It's also a modular-fitting bike, meaning that its seat height, foot controls, and handlebars adjust to fit anyone from 4-feet, 11-inches to 6-feet tall.

"When I can see a woman on a bike that she can handle, it's all worth it," says Tolleson, noting that the power and control a woman finds on a motorcycle can translate into greater self-confidence for other areas of her life. "It empowers her. She's not going to have some guy laughing at her because she can't back up her bike."