By Laura Entis
February 17, 2014
Opinions expressed by Entrepreneur contributors are their own.

A year and a half ago, Dana Michel's friend told her that after a mere four dates, the guy she was seeing wanted to know if he was marriage material. He took their relationship seriously, and he didn't want to waste his time if she felt differently.

This got Michel curious -- she started asking friends, family and colleagues about their dating history, and discovered that while men were up-front about their intentions, women often held back, scared that asking for commitment would make them appear desperate or shrewish.

Inspired by what she heard, Michel decided to launch a relationship site that would go beyond meaningless hookups. Launched January 1st, MarriageMaterial.co is for professional, independent women age 27 or older who are ready for marriage and want to stop wasting time on guys who aren't.

MarriageMaterial.co's central appeal lies in the novelty of its premise: amateur matchmakers are paid cash rewards for pairing their friends/co-workers/family with single users. Single subscribers (Michel charges a $99 annual fee, to ensure that "everyone who joins is serious about finding love") place cash valuations on a successful match, which they can choose to define as a single date, three dates, an engagement, or even marriage. Matchmakers, who sign up for free, are paid when they make a successful match.

The idea is to create an online dating experience that is creep/commitment phobe free. While Michel declines to disclose the number of people currently using the site ("we're growing every day," she says), around 75 percent of matchmakers are female. "They've recruited their husbands, boyfriends, and male friends," Michel says. "Women feel safer when it's another woman introducing them to a man." 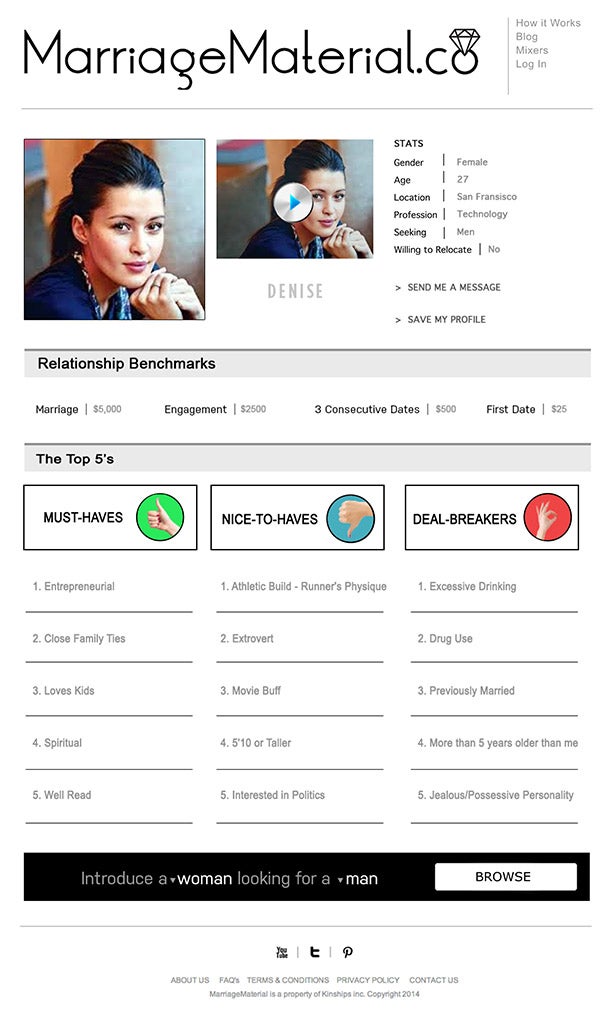 This may be the factor that sets MarriageMaterial.co apart from its many, many competitors. Defining a niche is important for the site to gain any real traction, says Jeremy Edwards, a lead industry analyst at IBISWorld, and author of the 2013 Dating Services in the US industry report.

The dating business in the U.S. is huge; 2.1 billion dollar huge, according to Edward's report, with online dating services representing 53 percent of the market's value, a number that is rapidly growing (in 2013, industry revenue is estimated to spike 7.1 percent).

Understandably, it's a hot and crowded area: over the last five years, the number of online dating and matchmaking companies has grown steadily at a rate of 3.1 percent, reaching 3,898 companies in 2013.

Because the labor and capital hurdles are low, the majority of these companies are nonemployer. Even at MarriageMaterial, Michel is the only full-time employee (she quit her job as a digital marketing consultant back in June). The site is solely funded by $10,000 of her own money.

Larger sites are quickly consolidating the market. To compete, smaller sites need to aggressively differentiate themselves while building a user base and offering features like mobile apps that online dating veterans have come to expect. (MarriageMaterial doesn't have an app yet, though one is in development.)

MarriageMaterial's main advantage might be its approachability. While Edwards points to a list of niche sites, most backed by InterActiveCorp (the company that owns Match and OkCupid), MarriageMaterial.co is unique in that women are setting up other women with their friends.

This distinction could be important. While attitudes towards online dating have grown considerably sunnier since 2005, according to a recent Pew study on online dating and relationships, many women still have negative experiences. "We found that about half of online daters we spoke with have experienced someone seriously misrepresenting themselves in a profile, and about a third had been contacted in a way that they found uncomfortable," says Aaron Smith, a co-author. "Women, unsurprisingly, were more likely to have experienced that situation than men."

He points to the somewhat startling statistic that out of the approximately 11 percent of American adults who have used an online dating site, only 66 percent have gone on an actual off-line date. "It's not something that works for everyone," he says.

Michel hopes her site will appeal to women who find the available options wanting. She puts herself in this category; years ago, she had a profile on Match.com. At first, she says, it was a positive experience – "there were all these people saying they were interested!" – but she quickly realized that while the quantity was there, the quality wasn't.

"The matchmaker aspect adds another screener," she says. "It's another layer of safety."