The 'Etsy Economy' and Changing the Way We Shop

By Kathleen Davis
March 22, 2013
Opinions expressed by Entrepreneur contributors are their own.

It's not an exaggeration to say that Etsy wants to change the world. It's part of the mission statement of the ecommerce site for handmade and vintage goods. Etsy CEO Chad Dickerson says the company is seeking to create what he calls an "Etsy economy."

"An Etsy economy is a people-powered economy with person-to-person commerce. It's the feel of a farmer's market instead of a supermarket," Dickerson says. "We want to bring the Etsy ethos into the larger retail ecosystem."

Etsy's plug-and-play platform has eliminated much of the complexity of starting a business, offering its members exposure and support that for many would be otherwise difficult to find on their own. Now the company is looking to take its support of budding business owners a step further. It recently announced plans to collaborate with local communities to teach entrepreneurship skills to residents, starting first in Rockford, Ill. Next, it's launching a program to help its members sell wholesale by connecting them with buyers from such brick-and-mortar retailers as Nordstrom.

The moves build on the company's efforts to support its creative community and reimagine retail. This weekend the company is hosting its third annual Hello Etsy conference for Etsy sellers and other small-business owners. The event, at Brooklyn's Pratt Institute, addresses the issues intrinsic to the site's 'maker" philosophy including the future of consumption, new methods of production and alternative approaches to work.

Since it launched in 2005, the Brooklyn-based company has grown steadily. The site has 25 million members, employs more than 400 people in the U.S. and abroad, and has helped facilitate transactions in nearly 200 countries. Members' sales reached $895.1 million in 2012, a 70.3 percent increase from 2011. The company expects members' sales to cross $1 billion this year. Etsy declines to comment on the company's annual sales, but confirms that they raised $40 million in a Series F round of funding in May 2012.

Part of the reason for the rapid growth is the low cost of entry. Sellers pay a $0.20 listing fee for each item they post in their virtual shops, and Etsy takes a 3.5 percent cut of each sale.

Amid its growth, Etsy has faced criticism that some sellers flout the site's rules on selling only vintage and handmade goods. The company maintains that less than 1 percent of listings are flagged as potential rule breakers, and it employs 21 people to police the site for violations. "Etsy was founded as an open marketplace, and we still are today," Dickerson says. "This is the Etsy equivalent of spam, in a really large marketplace the actual impact of the bad actors is quite small."

This month, Rockford, Ill., Mayor Larry Morrissey announced plans to collaborate with Etsy to teach entrepreneurial skills to high-school and public-housing residents using Etsy as a "living lab," where students can make, market and sell their own products, first in a classroom with an instructor, then online by creating their own Etsy shop.

"What's happening in Rockford a different way of using the Etsy platform that demonstrates how a for-profit business can generate good in communities," says Dickerson.


Etsy Wholesale is designed to help shepherd verified buyers from national retail chains and boutiques on a private platform where they can connect directly with Etsy sellers who are versed in handling wholesale orders. The goal is to streamline the process for these professional buyers who may otherwise be scouring the site's massive marketplace listings. The program is expected to start this month in a beta invitation-only version and launch fully later this year.

For a closer look at the how entrepreneurs are growing businesses on Etsy, consider the following three success stories.

One Order At a Time
Amy Stringer-Mowat and her husband Bill Mowat built their business, A.Heirloom around state-shaped cutting boards they created to serve cheese at their wedding. The couple, both architects, decided to put one for sale on Etsy and see what happened. 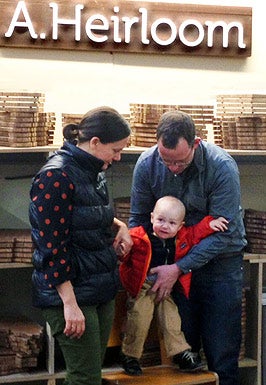 Their business took off. Soon after the first posting in May 2010, their Michigan-shaped cutting board was featured on Etsy's homepage "treasury," a themed collection selected by members and Etsy's merchandising team. It was noticed by a journalist from Real Simple who featured the boards in the magazine's holiday gift guide. By the end of the year, the couple had filled 3,000 orders at about $48 each.

To date, they have sold more than 30,000 boards, including a portion through their own website. In 2012, gross sales grew 20 percent from 2011 to $750,000. During busy times, which include June wedding season and Christmas, the Brooklyn-based couple hires temporary staff to help with sanding and packing.

"We see ourselves as an Etsy brand," Stringer-Mowat says. "We were discovered on Etsy. We feel intensely loyal to Etsy. They have been supportive as we've grown."

Etsy's downside? "People forget that it's a product that's being made by a small company, so it's not going to arrive next day. They don't understand the extra effort that handmade items take," she says.

"Discovered" By the Big Guys
Irina Adam had sold her organic skincare products in local shops for years, but it wasn't until a buyer from Anthropologie noticed her botanical lip balm on Etsy's front page that her business really took off. 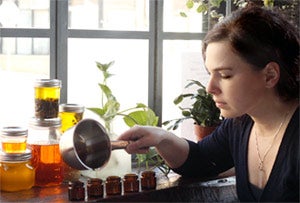 The founder of Phoenix Botanicals, who works from her Brooklyn apartment, enlisted the help of friends to help fill that first large order. Since then, she's worked out how to balance larger orders with her individual Etsy sales. Through the exposure from Anthropolgie, she has been featured in several magazines and is looking to sell in France and the U.K.

Esty is still her biggest income generator. Last year her Etsy orders totaled about $14,000 -- products range from about $4 to $50 each -- compared with $10,000 through stores. Adam still performs all aspects of her business from the packaging to the detailed product descriptions and artful photography. "I'm a maker and an artist, and I want to make the best stuff," she says. "I don't want to make a lot of things and make them cheap."

One drawback to the Etsy community that she's noticed: "The language of the site puts men off. It's like Etsy is for women and Ebay is for men," she says.

Stumbling Into Wholesale
Sarah Woodson's company, Downing Pottery grew slowly for years, until last month when Etsy contacted her about selling her mugs as its first local seller in a new partnership with Seattle-based retailer Nordstrom. 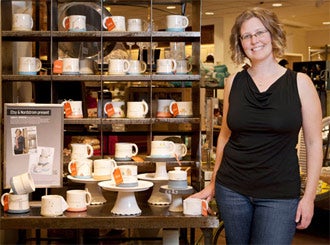 It started after a gallery owner asked her to create a mug with a drawing of the Seattle's iconic Space Needle. "I have the drawing skills of a second grader. It looked like a hamburger on a tripod," she says. "But people loved them and they sold out right away."

From that success, Woodson created her handmade neighborhood mugs that feature simple drawings of local landmarks. Selling for $36, they were popular at art fairs and local shops. "Suddenly all of my checks had an extra zero at the end," Woodson says, declining to comment on her annual sales.

Nordstrom's order for 40 mugs sold out in a week, and it has bumped up its next order to 60. Woodson, who joined Etsy in 2006, works alone and needs about a month to make an order of 40 mugs.

Woodson says her Etsy shop has seen a boost from its Nordstrom partnership. "There isn't really a downside to selling your items on Etsy," she says. "Some people feel that it's gotten too big, and it's easy to get lost in the mix, but I haven't found that."

Related: Bringing Online Shopping to Life: How Etsy Experiments With Retail as a Brand Experience