The Next 3 Surges That Will Change the Future of Crowdfunding

The remaining months of 2014 and beyond will hold unexpected twists for those hoping to ride the ever-increasing crowdfunding wave.

The remaining months of 2014 may still hold unexpected twists for those hoping to ride the ever-increasing crowdfunding wave in the U.S., Europe and beyond. The number of crowdfunding platforms available to investors continues to grow, with more than 536 active platforms estimated last 2012. If the SEC regulators make Title III of the JOBS Act workable (as it relates to crowdfunding), thereby imposing less restrictions on non-accredited investors, the uncapped crowdfunding market will continue to swell through more innovative platforms and startups. The ruling by this regulatory body will likely come about in late 2014, but even while the public is eagerly waiting in anticipation, due diligence is still recommended.

Related: The 6 Waves to Watch in the World of Crowdfunding

Here are three surges that you need to watch out for in the future:

1. The inevitable future of fraud.

Last October 2013, the World Bank reported that there have been very few documented cases of crowdfunding fraud - only 4 out of the total 43,193 (0.01 percent) projects launched on Kickstarter were identified as fraudulent. Crowdfunding research website TheCrowdCafe also reported zero incidents of fraud in the six major platforms it monitors. Keep in mind, by fraud we mean creating fake campaigns or companies, which is different from the legal concept of fraud which focuses on false representation.

The potential fraudster would have to face entire wisdom of the crowd. But the number of fraud cases, suspended campaigns, and scams in the crowdfunding industry is growing this year: GoBe, iFind, Anonabox, Scribble, Areal, Holovision, and the list goes on.

Investors should continue to be vigilant in vetting an investment venue before committing. As the crowdfunding landscape continues to widen, the chances of fraud will more than likely increase.

Some fraud risk mitigation techniques were outlined by the World Bank report, commissioned by infoDev, which the public should look for in each crowdfunding portal or campaign: 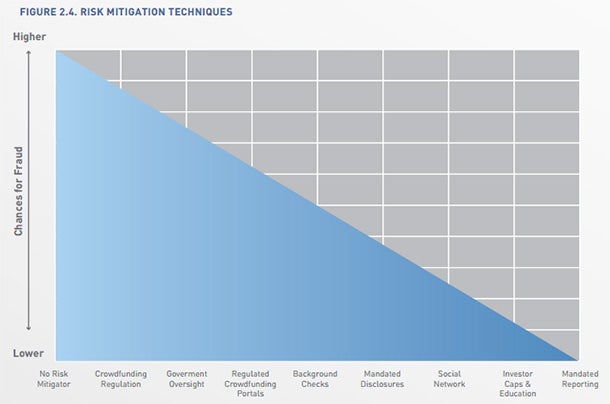 So far, entrepreneurs have relied on crowdfunding venues to vet opportunities before releasing their products to the public (aka market testing).Despite the massive amounts of capital raised via these platforms, many crowdfunding proposals are never released.

Undaunted, many companies choose to launch their crowdfunding campaigns directly through their own websites, sometimes with great success. Lockitron, which makes electronic door locks that can be opened with a cell phone, was turned down by Kickstarter. It launched a crowdfunding campaign on its website and raised more than $2 million from more than 14,000 investors in 30 days.

As the crowdfunding market grows and as the large crowdfunding platforms reject hundreds of proposals, eager solo startups will likely continue to offer crowdfunding campaigns directly to the public.

3. Big money and the crowd.

Institutional players investing along with the crowd is a hot topic in the industry today. And with the market projected to grow into a trillion-dollar industry, there needs to be all sorts of players to create a robust ecosystem.

Some think institutional money may curtail crowdfunding. It may also be that both crowdfunded capital and institutional money can co-exist as in the case of The Carlton Group, a real-estate investment banking firm since 1991 that has closed over $100 billion in transactions. The firm launched its real estate crowdfunding portal (Carlton Accredited Equity Crowdfunding) early this year. The firm recently raised $240 million of debt and equity in its Manhattan deal last August 29, 2014. Aside from using institutional money and crowdfunding capital, it also co-invests its own money in the deals on its platform.

As this trend is still in its infancy, there is much to speculate. But most crowdfunding players are optimistic that the crowd will co-exist with institutional investors. But as of now, crowdfunding is still a minority share so most likely the crowd could be marginalized as the bigger players get the lion's share of the investment opportunities.

Related: The Best and Worst States in America for Crowdfunding

Founder and Chairman of LDJ Capital

David Drake is an early-stage equity expert and the founder and chairman of LDJ Capital, a New York City-based family office, and The Soho Loft Media Group, a global financial- media company with divisions in corporate communications, publications and conferences.