When the World Is Your Office

These globetrotting entrepreneurs are turning their passion for travel into successful businesses.

By Alaina Abbott
August 27, 2010
Opinions expressed by Entrepreneur contributors are their own. 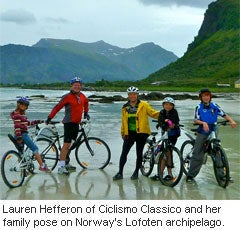 It all started with a passion and a curiosity for Italy. In search of her Italian roots and gorgeous roads to ride, Lauren Hefferon's year-long Rotary scholarship to Italy evolved into a three-year cultural immersion, which included hanging out at Mario Conti's bike shop in Florence (and learning the local dialect), racing for his team and exploring every road of Tuscany with her new network of Italian cycling friends.

That's how Hefferon started Ciclismo Classico, a cycling tour company that brings in $3.5 million a year.

"I found a niche that I knew very well, and knew that I wanted to be in business for myself, so I made the leap," Hefferon said.

Adventure tourism may not be incredibly lucrative, but the industry provides an inviting environment for entrepreneurs. Passion is key to cultivating a successful adventure tourism business; Hefferon is overflowing with it.

"Adventure travel engages our bodies, mind and spirit all at the same time," Hefferon said. "It fills you up, makes you whole again."

The adventure travel industry has been on the rise, according to a 2010 survey by the Adventure Travel Trade Association, a global network of more than 550 adventure tourism companies. Of the 300 companies that responded to the ATTA survey, 70 percent were looking to grow this year.

Overall, the adventure tourism industry is expected to reach $52 billion in 2010 in terms of outbound travel from North and South America and Europe, according to the ATTA. While most adventure travel businesses are small operations that bring in less than $1 million each year, about 20 percent of respondents to the ATTA survey have revenue of $1 million to $5 million a year. Frontiers Travel, established in 1969, boasts $30 million per year.

However, because of an operating margin between 9 percent and 11 percent, adventure tourism is not an industry that will bring in large sums of money, Frontiers co-owner Mollie Fitzgerald says. Instead, she emphasizes the "psychic income" side of running a travel business, which includes a love of travel. 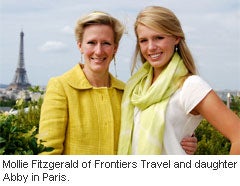 "The opportunity to travel, the things that you learn about, the experiences I've had certainly outweigh the financial side of the business," Fitzgerald says.

An analysis of the last decade could be enough to scare off many entrepreneurs before they jump into the travel industry. Fitzgerald, who joined Frontiers full time in 1985, listed some of the most recent deterrents to travel: the Gulf War, 9/11, SARS, foot-and-mouth disease in Europe and acts of terrorism. But she has observed cycles in the industry during the 40 years Frontiers has been in business.

"I think travel has become an essential ingredient in people's lives, and (the travel industry) does bounce back. It always does," Fitzgerald says. "We've seen enough peaks and valleys over the years that I'm confident in saying that." 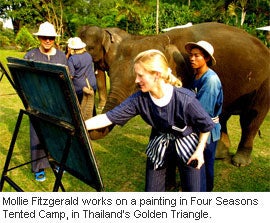 As the economy stabilizes, adventure travel is indeed swelling. Some companies anticipate as much as a 35 percent increase in bookings this year over 2009, according to a report from the Adventure Collection, a group of 10 adventure travel businesses.

As the number of travelers grows, the number of destinations has the potential to increase, as well. Xola Consulting Inc., established in 2004, works with governments to develop their countries as adventure travel destinations, which stimulates economic growth in those areas. Christina Heyniger, president of Xola, worked with the ATTA and The George Washington University to produce the Adventure Tourism Development Index. The index provides information about a country's potential to succeed as an adventure tourism destination by analyzing 10 Pillars, which include safety and security, tourism infrastructure, cultural resources, adventure activity resources and health.

Hefferon took the importance of location to heart when she founded Ciclismo Classico in 1988. She was the first to specialize in cycling tours of Italy, and Ciclismo Classico still offers many tours to places no other tour company goes. Hefferon led eight women on Ciclismo Classico's first tour, called Tuscany and the Enchanting Island of Elba. At that time, many tours were taking travelers to Tuscany, so Hefferon included Elba to add an exotic element to her tour.

Adventure tourism thrives on specialization. In the early 1970s, Mike and Susie Fitzgerald, who founded Frontiers, decided to concentrate on a few unique locales. They were among the first to offer salmon fishing in Iceland and photographic safaris to southern Africa. Frontiers also differentiates itself from other travel companies through its network of destination experts within the company. For instance, one team takes care of all the Atlantic salmon fishing, while another team focuses on saltwater fishing.

"No one is protective; no one's earning commission or afraid to share their clients with their colleagues," says Mollie Fitzgerald, Mike and Susie's daughter.

Building a strong clientele within Frontiers led to requests for non-sporting trips, such as wine-tasting in Italy after a fishing trip in Iceland. Eventually, Frontiers hired a person to focus on luxury trips, and the company established a division called Elegant Journeys in 1983. Diversification, in terms of both destinations and services, gave Frontiers the opportunity to flourish.

"We've been a lot of places--I would say probably more than most travel agencies--collectively," Fitzgerald says. "It's that collective body of experience that I think gives us a good advantage."

Another important way to grow an adventure travel business is through online marketing, social networking and search engine optimization. Hefferon has developed a strong social networking presence for Ciclismo Classico, allowing the company to connect with more than 4,000 people on Facebook. To garner even more Facebook fans, Ciclismo Classico will randomly select one person for a free trip once the page reaches 5,000 fans, and Heffron also has a personal blog.

Other successful adventure travel companies, like Adventure Life, have high-traffic blogs and 20,000-plus Facebook fans. Adventure Life specializes in small group adventures to Latin America. A few years ago, Xola's Heyniger heard about a man offering trail-running trips through his website, AdventureRunningCo.com. The company's name in itself increased its presence on search engines such as Google. 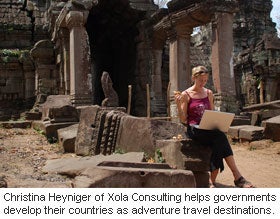 "It's one of my favorite examples of why you need niche marketing," Heyniger said. "They're making it because they're building up a database of people who love to run and who think this would be an awesome trip."

Starting an adventure travel business means a tour operator is going to face unanticipated challenges, which presents an irony of sorts. Consultant Heyniger has noticed that many adventure travel entrepreneurs are looking to escape from government and policy, but they end up getting pulled back in. Heyniger illustrates the situation this way: A man starts a rafting business in Idaho, then discovers that the Salmon River is being polluted by unregulated dumping. He begins lobbying for better regulation while still trying to build his business and client base. Choosing an area where policies can be influenced can determine whether a business expands or dies; some countries are not as open as others to modifying regulations.

Another essential element of adventure tourism is the impact locals have on travel experiences. Guides for Ciclismo Classico are locals who have "tremendous passion," Hefferon says. For 30 years, Frontiers has been working with the same driver, a one-man operation, in the United Kingdom.

"Those are the kinds of people that can really make experiences come alive for a client," Fitzgerald says.

And when experiences come alive for clients, adventure travel businesses will thrive.