Opening-Day Lessons from a Wendy's Restaurant 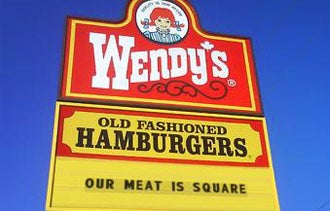 Recently, while out shopping in a neighborhood near Seattle, my family and I stumbled upon a new Wendy's fast-food burger restaurant. It turned out to be opening day, complete with a person dressed as the Wendy's mascot.

We had hit the soft-open stage, according to Denny Lynch, the senior vice president of communications at Wendy's International. "When we enter a new city, we often do formal grand openings. When we're adding a store in an existing market, it's optional," he says in an email.

Even though it was the soft-open, I think the event still had some glitches. Restaurateurs can learn from the mistakes. Here are some opening-day rules I came up with:

1. Make it clear. From the outside, we couldn't tell the restaurant was celebrating its grand opening. Where was the big, "Now Open" banner? Even at a soft opening, I still would expect a sign up stating the opening date to start building interest in the neighborhood. Get all possible mileage out of the fact that you've just opened the doors, and use signage to draw a crowd.

2. Train before you open. Nearly every employee at the opening seemed to be shadowed by a trainer. This phase should have concluded before customers arrived. Don't risk a poor customer-service experience due to training slowdowns during an opening. This is your chance to make a good impression and get me to come back.

Related: Seven Ways to Get Your Unmotivated Workers Off Their Butts

3. Let customers have the fun. One of the coolest features in this new Wendy's is a digital, next-generation soft-drink machine from Coca-Cola with 100 different drink choices instead of the usual eight or ten. My 10-year-old son was just dying to punch those buttons and mix up a custom drink, but the employees were manning it and pulling the drinks for the customers. Maybe the intent was to keep things moving, but it deprived customers of a fun experience.

4. Learn to delegate. The aisles were full of corporate types in suits yakking on cell phones, clearly reporting back to headquarters on how the opening was going. Their presence made it hard to navigate the restaurant. Just one could have done the job.

Related: The Office's Five-Step Guide to a Disastrous Store Opening

5. Give free stuff. Opening day should have special surprises -- in this case, let's say free sundaes or sodas from that fascinating new machine. Instead, the only giveaway was an offer to go online and fill out a survey in exchange for a $2 coupon for food. To keep customers coming back, delight them with rewards they can use right away at their first visit.

Wendy's is a popular chain, so I bet this store will grow to be a success, despite the opening-day glitches.

What do you think makes a great grand opening? Leave your tips and add to my list.

Related: How to Put a New Spin on an Old Idea