"We want to communicate with the computing device naturally, as you would with another human," Mooly Eden, Intel's senior vice and perceptual computing general manager, said today during a press conference here at the 2014 International CES. Think of it, he said, as adding senses to the computer brain. 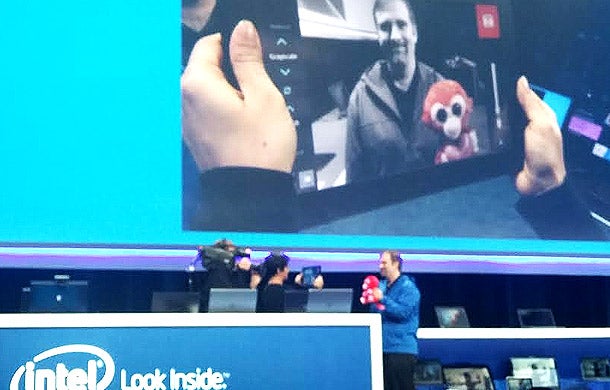 The technology will appear in various types of devices -- laptops and tablets, for example -- from hardware partners like Asus, Dell, HP and Lenovo, among others. Intel outlined two new ways RealSense will initially take shape: a RealSense 3-D camera and a natural language personal assistant.

The 3-D camera features a depth sensor and a can detect specific gesture movements from a user's hands and fingers, as well as a person's facial features and movements. With the camera, a person can use a device with any number of "natural" gestures instead of, say, typing or using a mouse. It can be used for gaming, enhanced learning and to capture and share 3-D images.

Related: A Tech Entrepreneur's Insider Tips for Exhibiting at CES

The camera can also be used for video conferencing or video blogging. For example, Intel has partnered with Microsoft to enhance Skype video conferencing, enabling users to change or remove a person's background during a video call and add video and other images in real-time. These features might also be useful for content creators who produce videos for YouTube or perhaps a company blog.

One might think of the camera as enhancing the devices sense of sight, Intel says.

Intel says the new personal assistant operates conversationally. "People can simply tell it to play music, get answers, connect with friends and find content -- all by using natural language," the company says.

The personal assistant software will available later this year on Ultrabooks and tablets from Asus, Toshiba, Acer, Dell, HP and Lenovo, Intel says.

Related: New From CES: Improve Videos on Your Smartphone With This Smart App