From Glow-In-The-Dark Highways to 'Smog Diamonds,' One Man's Vision of a More Beautiful, Sustainable World

By Laura Entis May 23, 2014
Opinions expressed by Entrepreneur contributors are their own.

Daan Roosegaarde wants to make the world more connected and sustainable -- twin buzzwords that are beginning to feel like Silicon Valley's collective mission statement. But unlike the tech elite, Roosegaarde turns to design instead of big data to guide his next steps.

Roosegaarde runs a social-design lab in the Netherlands and recently opened up a second in Shanghai, where he oversees a team of designers and engineers. Projects that emerge from Studio Roosegaarde are typically hard to categorize – are they fashion? Art? Infrastructure? – an ambiguity Roosegaarde strives to cultivate. For him, anything that can be easily labeled is also easily forgettable.

Yet a common thread unites all of his projects: Roosegaarde is obsessed with the relationship between people and their environments, the ways we shape our landscape and the way it reacts and influences us in turn.

Earlier in his career, Roosegaarde produced a series of installation pieces and sculptures, most of which were exhibited in museums. Since then, he's moved into other territory. Recent works include Dune -- a "public interactive landscape" built alongside the Mass River in Rotterdam made up of hundreds of LED fiber lights that brighten and dim in response to surrounding sound and motion -- and Marble, a series of sculptures installed in a public square in Almere City that brighten and change color when touched. In 2011, Roosegaarde collaborated on Intimacy, a dress that transitions from opaque to sheer when its wearer is aroused. Activated by heart rate sensors, electricity flows through e-foils embedded in the fabric; a fluttering heart results in a more transparent dress.

Two projects currently in development mark a new, radical transition for Roosegaarde Studios. The Smart Highway and the Smog Project, while both intensely visual, are not installation art. Instead, both aim to offer solutions to real problems – energy guzzling streetlights and pollution.

The Smart Highway was conceived from Roosegaarde's frustration at the gap between our increasingly high-tech, connected cars and the "Medieval roads" we drive them on. The project aims to improve the imbalance by updating the highway system, replacing outdated street lights with strips of "photo-luminizing" paint, an ultraviolet-charged substance that collects energy during the day and releases a green (almost radioactive) glow at night.

Last month, with the help of the Dutch road manufacturer Heijmans, Roosegaarde illuminated a 500 meter stretch of highway in Oss, the Netherlands, 100 kilometers south east of Amsterdam.

As with most pilots, not everything went smoothly. The paint, as the BBC has reported, is sensitive to large amounts of rain and has not been producing a consistent amount of light. In addition, "We had some truck drivers who thought it was really fun to drive over it 20,000 times," Roosegaarde says, which stripped the paint away. 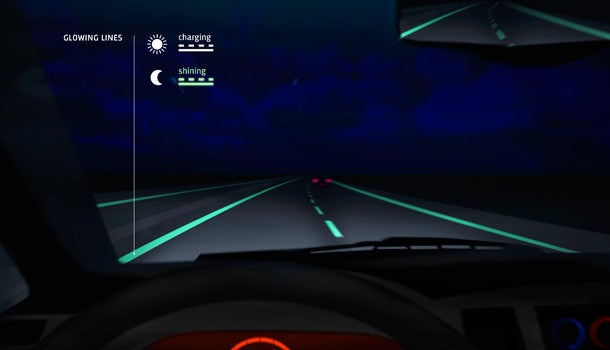 The reaction from many drivers was also unexpected. "Because it's so beautiful people sometimes turn their headlights off," Roosegaarde says, adding that while he can't "legally" recommend the practice, "illegally I say do it for half a minute. It's like a fairytale."

The project, according to a press release, has been "temporarily faded out" due to these issues but an updated, more durable version – Glowing Lines 2.0 – will be rolled on a larger scale in the Netherlands and abroad this summer.

Roosegaarde says he welcomes these setbacks. "If I didn't want them, I'd stay in the comfort zone. There is a Dutch saying: If you want something to shine, you have to have friction."

Related: Room to Grow: A Look at the Changing Landscape of Green Startups

He has little interest for design that exists in a vacuum, on a museum wall, untouchable. Instead, he says, his aim is to "update reality" by seeing his solutions implemented, which means he must confront unexpected hurdles – regulations, pilot hiccups, truck drivers, weather, city officials etc. – that most artists never encounter.

"We have a higher difficulty than people in the studio," he says, adding that if he took a more traditional approach –exhibiting his work instead of trying to roll it out on highways across the country – he'd have realized a larger percentage of the ideas swirling around his brain by now. At the end of the day, though, Roosegaarde says he prefers impact to quantity, and so he welcomes the obstacles.

It's good he's adopted this attitude. His current project, which attempts to tackle Beijing's notorious pollution problem, is ambitious. Dubbed the Smog Project, Roosegaarde wants to create pockets of fresh air in the otherwise murky-brown, smoggy city with an ionized vacuum cleaner like device that uses high-voltage, low-amp electricity to positively charge surrounding smog particles, which are then attracted to a collector plate on the ground.

His latest prototype is a room-sized machine, but he plans on spending the next year scaling up the device; if all goes as planned, the final version will create a 30,000 cubic meter column of clean air using only 30 watts of power and is tentatively scheduled to be installed next summer.

To fund the project, Roosegaarde estimates he'll need around $30 million and so he has a seemingly ludicrous proposal: Collect the grit vacuumed out Beijing's sky and compress the particles into diamonds. 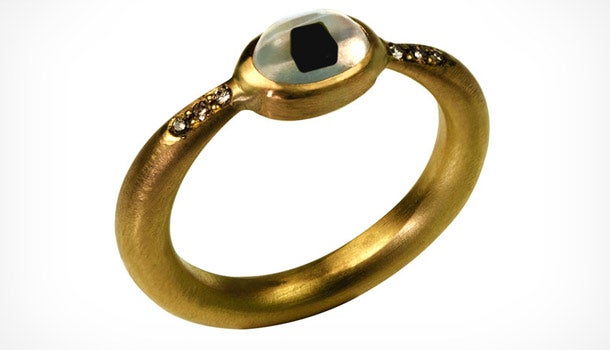 He's already starting making the rings, which will retail at $30 (the plan is to sell 1 million of them, with sales starting in October or September). Unfortunately, Roosegaarde's pilot "vacuum-cleaner" is currently only collecting enough smog to make 12 or 13 rings a day, so he's teamed up with local schools, consulates and hospitals, collecting the build-up smog particles from their air purifiers.

"The creative entrepreneur in me likes to make links between poetry and pragmatism," Roosegaarde tells me, and the concept of transforming dirty air into jewels is certainly poetic. The plan is slightly less practical, however; even if the room-sized device is installed – and while it could still run afoul of city officials, Roosegaarde presented the project to Chinese President Xi Jinping at a party in March hosted by the king and queen of the Netherlands, and says it was well received -- "of course it can never be a solution for the whole city of Beijing." That requires systematic overhaul of energy consumption, including efforts like the mass introduction of electric cars, "not just artistic symbolic thinking."

The project's central goal is to raise awareness, not simply for Beijing's smog problem but also to show people that we have the power to consistently shape, update and improve our environment. Roosegaarde says that his inspiration comes primarily from looking at the world around him, and simply asking himself: Why is it like that? Can it not be like this?

Those two questions have led him to imagine a host of on-the-surface crazy ideas, including a cityscape lit not by lights, but by glow-in-the-dark trees. Inspired by the natural light produced by jellyfish and fireflies, Roosegaarde is working with researchers at the State University of New York to transplant DNA from luminescent marine bacteria into the chloroplasts of a houseplant, creating vegetation that glows on its own. Roosegaarde predicts a pilot version of light-emitting trees will launch sometime next year.

All his projects, he says, attempt to "merge the virtual world and the real world into one," not through apps or devices like Google Glass (he calls the eyewear "horrible"), but by figuring out how technology can be applied to the "real world" -- the one that exists outside our screens -- to build an environment that is at once more healthy, sustainable, engaging and beautiful.