The world’s largest home improvement retailer is scrambling this morning to make heads or tails of a possible credit and debit card data breach. The news of a potential cyber attack on its payment systems first surfaced yesterday afternoon.

Related: Protect Yourself: Turn On This Security Feature in Your Mobile Banking App

The Atlanta-based company said in a statement to customers today that it still isn’t sure if a breach actually occurred or not. However, if its payment systems were actually compromised, Home Depot says its customers won’t be liable for potentially bogus charges. Updates on the situation were also released via Home Depot’s Twitter and Facebook accounts.

“We’re looking into some unusual activity that might indicate a possible payment data breach and we’re working with our banking partners and law enforcement to investigate,” the company said on its corporate website. “We know that this news may be concerning and we apologize for the worry this can create.” 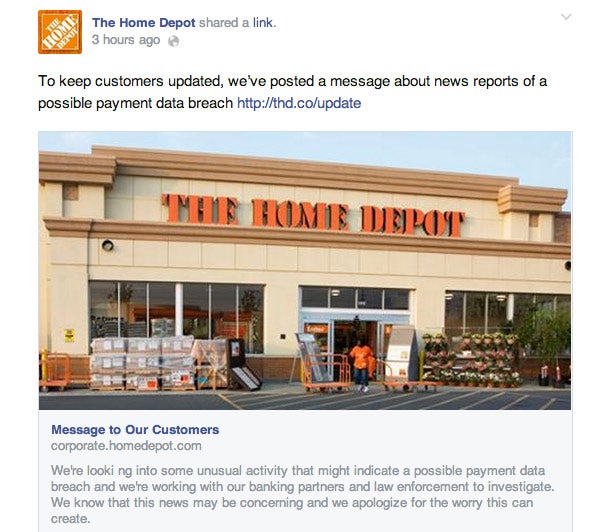 Home Depot, which has 2,200 retail stores in the U.S., Canada and Mexico, assures customers that they will be notified immediately if a breach is confirmed. In the meantime, it advises customers to closely monitor their payment card accounts for unusual activity. As with the recent UPS Store breach, credit monitoring will be offered to potentially impacted customers.

For those who have questions, Home Depot asks that you call its Customer Care line at 1-800-HOMEDEPOT.

The company has not yet responded to Entrepreneur.com’s request for comment.

Keep Your Business Protected With These 10 Privacy Tools, Now on Sale

Secure Your Home or Office with This Simplified Smart Security System

Will Hackers Capitalize on COVID-19? Don't Wait to Find Out — Use a Password Manager.

Why Freelancers Need a VPN in 2020

Every Entrepreneur Should Use a VPN. Here's Why.