Doubling Down: Compareit4me.com Makes Every (Investment) Round Count

In April this year, we at Entrepreneur Middle East filmed compareit4me.com co-founders Jon Richards and Samer Chehab for an episode of #EntMETalks, a video series that we feature on our YouTube channel. During the course of the interview, we asked the duo if they had a message for their competitors in the market, and Richards replied: “Haram to compete with us, that’s what I’d say!”

He said this in jest, of course, but if his company’s announcement in late May about raising a total of US$3.5 million is any indication, then compareit4me’s rivals should indeed think twice before pitting themselves against it- after all, since its launch in 2011, this enterprising startup has been able to raise a total of over $9 million so far, which is, by itself, a testament to how well this online comparison site is doing.

Its numbers are impressive: CFO Jonathan Rawling tells me that compareit4me has seen organic traffic rise by over 400% since January 2015, and since its Series A round in September 2015, its annual revenues have more than quadrupled, with 2017’s revenue expected to be more than double that of 2016.

Another good sign of compareit4me’s current state is how its backers keep returning to support the venture- its latest funding round sees the participation of existing investors STC Ventures, Wamda Capital, Dubai Silicon Oasis Authority and Saned Partners, and the significance of this act isn’t lost on Chehab and Richards.

“We don’t take this for granted; we feel incredibly lucky that these guys are ready to support us on an ongoing basis,” Richards says. “But this is not a charity. They’re supporting us because they’ve seen us grow, they’ve witnessed the growth since their original Series A funding, and they strongly believe in our plans for the future.”

“It’s a great sign, and I think new investors want to see this as well,” Chehab adds. “It would be a pretty bad sign if your existing investors stopped taking part in rounds, so it’s important for us to get these guys to come back in. It gives the right signals to new, incoming investors.”

And compareit4me certainly would like to see new names in its list of investors- the company is, after all, looking to close a Series B round of $10 million in the coming months. “We’re speaking to some really interesting investors- guys who can write really big checks, who can support us for the next few rounds if we need it,” Chehab reveals. “Not only this, but they will also be able to support us with guidance and contacts.”

But getting funds in this round hasn’t been smooth sailing, the cofounders note. “It’s not easy,” Chehab says. “I think we’re lucky that we’ve shown great growth. We’ve shown that we have a good understanding of the insurance market, and we’ve demonstrated an ability to execute. Our insurance business has been growing 25% month-on-month, and, for the last three years, our revenue has doubled year-on-year. So, we’re showing that we can execute.

"I think 2016 was a hard year for lots of startups –particularly anyone trying to get ad revenue– but despite that, we managed to grow our revenue, so I think that pays testament to the strength of the business and the team. Clearly, growing in a tough market, and launching new revenue streams, gives us the best possible chance of attracting new investors. Perhaps our greatest advantage at the moment when raising money is that, in 2016, we generated twice as much revenue as our nearest competitor.”

Richards adds, “There’s a lot of debate right now in the region on which round of investment is hardest in the region. I personally think that Series B is one of the more challenging– there are significantly fewer investors in the Middle East who can write the $2 million to $5 million checks. That being said, we’ve currently got five investors who are going through due diligence at the moment. And if just two or three of those decide to invest in us, then we’ll be oversubscribed in our Series B.”

The future is thus looking bright for compareit4me, an enterprise that has evolved quite a bit since its early days- the company started off by offering a comparison tool for a range of banking products, like credit cards, personal loans, et al, grew its presence across the region, and then in 2016, it launched an online car insurance portal in the UAE, which is today selling $1.5 million worth of insurance policies every month.

Given these figures, it shouldn’t come as a surprise that compareit4me’s recent raise will be used to fuel this growth further, which Richards and Chehab expect to reach $5 million per month by the end of this year. “The plan for us now is to invest heavily in growing our market share with car insurance in the UAE- we want to aim to get to around 15% share of the UAE’s car insurance market by the end of this year,” Richards says. “We’re helping lots of people save time and money when buying insurance, and we know that if we keep investing, if we keep pushing, there’s no reason why we shouldn’t attain the growth that we expect this year.”

This particular tool is also set to be scaled across the region- Chehab notes that while compareit4me’s banking comparison offering is live across the nine markets of the UAE, Oman, Qatar, Bahrain, Kuwait, Saudi Arabia, Egypt, Lebanon and Jordan, its insurance platform is live only in the UAE, with the Kingdom being its next target market.

“We believe that Saudi Arabia will feature very heavily in the future of compareit4me,” Chehab says. “We have been in active, and very positive, talks with the regulator in Saudi Arabia, the Saudi Arabian Monetary Authority (SAMA), and we’re hopeful that we can go live in the next few months with car insurance comparison in the Kingdom.” 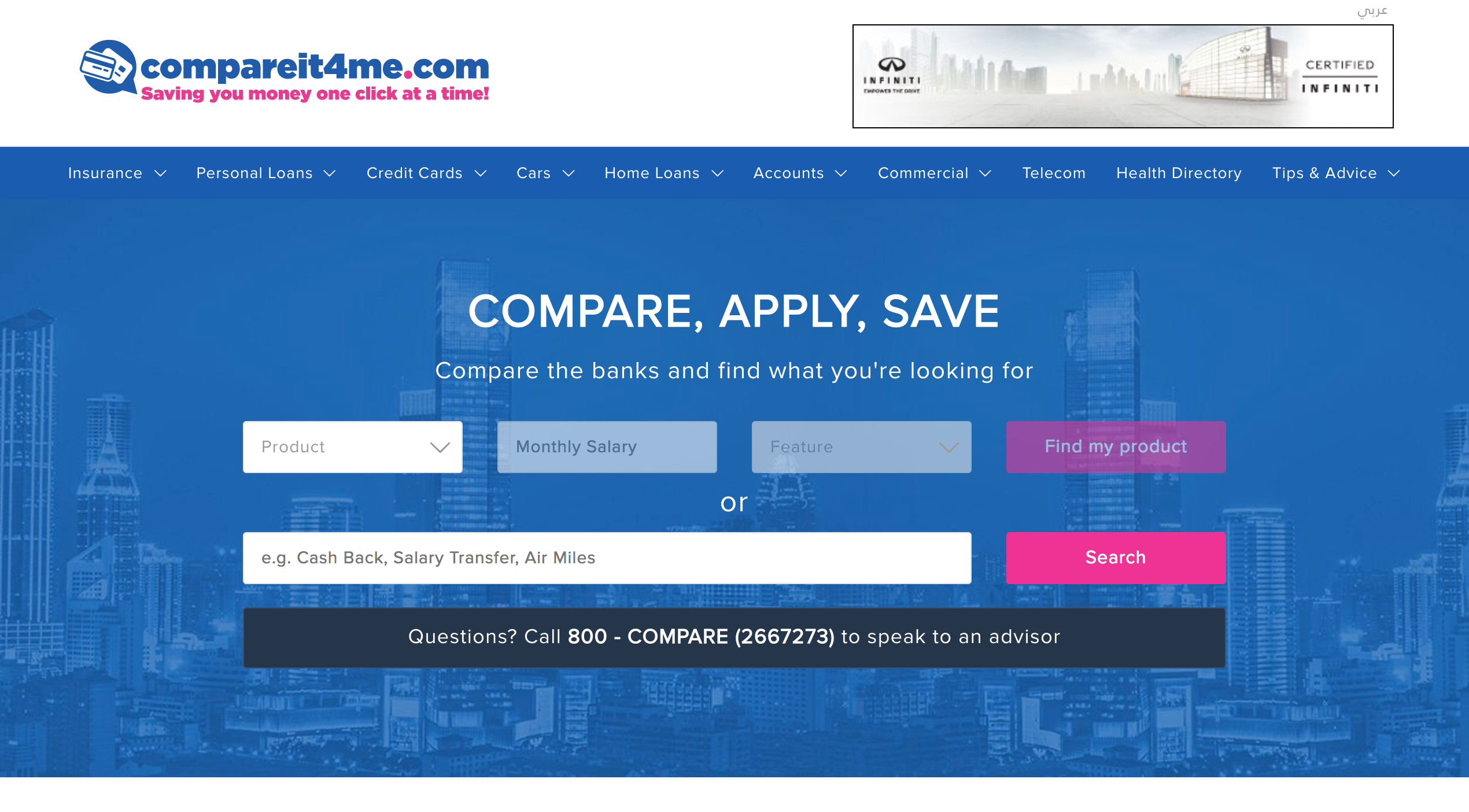 At the same time, the compareit4me team is working hard on getting more insurers on its platform- a task that comes with its own set of challenges. “As you can probably imagine, some insurers just don’t want to be compared,” Richards explains. “Eventually, you do get a snowball effect; when you have a large number of insurers on your platform, the rest just start to feel left out, so we’re finding that insurers are signing up more and more quickly. But there are still some that don’t want to be compared, and actually, it doesn’t make sense to me. We’ve always said that we’re value comparison, not price comparison. So, for some people, it’s about saving money, and they’ll look for the cheapest possible price, which is fine. But most -about 80% in fact- of our customers don’t go for the lowest possible price; they’re looking for the best value and the best coverage. As long as the level of coverage they need is correct, then they’ll find the best price for that level.”

Chehab agrees, noting that insurers shouldn’t worry about being on compareit4me for fear of their offerings perceived as being expensive. “Customers are not stupid; some of them buy based on brand, some based on features, and some based on price,” Chehab notes. “You can’t win every possible consumer. The thing I would point out is that, even if insurers aren’t working with us today, they are being compared. Users will come to us to do a comparison, and then they might go direct to an insurer who’s not on our site, and compare the price. Whether it’s all on our website or not, people are comparing the whole market. We’re just trying to make that as easy as possible, by having as many insurers on the panel as we can.”

For a company that started only six years ago, compareit4me’s journey to where it is today (and where it aspires to be) is reflective of its cofounders’ dogged focus on powering through with their vision for the enterprise. The ecosystem has changed quite a bit too in the years since they have been in business, and Richards notes that conditions today are a lot more favorable for MENA entrepreneurs to get their businesses off the ground.

“I think the changes have been massive since we got our first commercial license in 2011,” Richards says. “Now, there are far more options, and it’s far cheaper for startups to get off the ground. I think that now there are far more investors –more angel investors and more Series A guys– and there are incubators which just didn’t exist before. Investments are no doubt getting done more quickly. The market has changed significantly and it’s an exciting time for any startup.”

“And the fact we’re seeing exits and M&A activity is the ecosystem coming together properly,” Chehab adds. “I think we’ll see things accelerate even more now. I think family offices are going to get even more excited about the potential that startups can bring to their brick-and-mortar businesses.”

Richards alludes to Amazon’s March acquisition of Souq.com as an indication of where things could be headed. “The Amazon deal is amazing- Ronaldo [Mouchawar] has built a spectacular business. It’s something so good and so defensible that even Amazon thought that, rather than taking him on, it’d be better to acquire him. That’s huge. It gives you some insight into the difficulty of running a business in the MENA region– not the UAE, not Saudi, not one market, the whole MENA region. If you want to be successful in the Middle East, you need to be a multi-market operation. What Ronaldo did is prove that he can take his business, and he can go to another market and localize it, and he can deal with the local challenges around regulation, licensing, and all of these things. And he’s shown he can brush those issues aside and build a solid, defensible business– and a still-growing business on top of that.”

Chehab also notes, “What that means for the market is that Amazon will have shone a huge light on the Middle East. More businesses will be looking to acquire more businesses within the region, and that’s always exciting.”

As for compareit4me itself and where it’s headed, Chehab and Richards seem to be quite clear about how they want to position their enterprise in the years to come. “When it comes to the long-term vision, we want to make insurance aggregation ubiquitous across the MENA region,” Richards says. “There are plans to launch car insurance across all nine markets, and we will do a handful of those in the next few years.”

Chehab adds, “We’re already the largest aggregator in the UAE, but the goal is to become the largest comparison site in the MENA region. Consumers will benefit from the economies of scale that brings us– consumers will get better rates, they’ll get exclusive rates, and they’ll find deals that are not available anywhere else. And if the consumer benefits, the insurance companies benefit, and it’s an ‘everyone wins’ proposition.”

It’s an attractive vision for the future, all right, and the cynical among us might be inclined to dismiss it off as yet another far-fetched entrepreneurial dream- but given all that compareit4me has accomplished so far, that goal certainly looks to be an achievable one, and we at Entrepreneur think it’s safe to say it’s only a matter of time before it gets realized. Here’s hoping.