“With over 10 investment vehicles launched to date across asset classes, Gulf Capital has become today one of the largest and most diversified alternative asset managers in the Middle East.”

Having deployed over half a billion dirhams in technology and e-commerce investments across the GCC, Gulf Capital is one enterprise that is making no secret of its concerted focus on the region’s digital economy- according to co-founder and CEO Dr. Karim El Solh, this is the sector where we can expect to see a number of success stories very soon, and well, he and his firm want to be a part of these tales when they are told.

“The technology scene is rapidly evolving in the GCC, and we are seeing the rise of a number of regional players that are becoming market leaders, both on the regional and global fronts,” Dr. El Solh says. “Gulf Capital is actively backing these market leaders, and investing in them, helping them graduate to the next level… We forecast a substantial increase in technology investments in the GCC, and significant returns to be generated in the near future for the early backers of these technology companies.”

And some of these results are already showing: Gulf Capital’s current investments in this space include Destinations of the World, which Dr. El Solh notes has become “one of the largest online accommodation wholesalers in the world,” with its footprint today extending all the way from North America to the Asia Pacific region. Besides Destinations of the World, Gulf Capital has also invested in Sporter.com, a sport-based products and supplements marketplace, and Emirates Auction, which has been deemed one of the largest online auction site in the GCC region. If these investments are any indication, then it’s clear that Gulf Capital is betting big on the region’s e-commerce sector, which, according to Dr. El Solh, is poised for major growth.

“The digital economy is having a transformational impact on our lives and economies, and e-commerce is at the heart of it,” he says. “It is perhaps the top mega trend that will have a profound impact on every business in the GCC in the coming years. According to Boston Consulting Group, the digital economy, which contributed US$2.3 trillion to GDP in the G-20 in 2010 and is estimated at more than $4 trillion in 2016, is growing at 10% a year; significantly faster than the global economy as a whole. Regional e-commerce is still small when compared to world averages, but this is set to change. At the moment, the share of ecommerce in the GDP of the Middle East and North Africa region is at the bottom of the world list, with the eGDP representing 0.71%, against a global average of 3.11%, according to a research conducted by E-commerce Foundation. So, however you look at it, there is only upside from here, and the regional e-commerce growth potential is huge.”

Dr. El Solh says that Gulf Capital is currently managing over AED13 billion in assets across various alternative asset classes, with its largest two divisions being private equity and real estate. “On the private equity side, we raised and closed in 2015 the largest GCC-focused private equity fund, the $750 million GC Equity Partners III,” he notes. “Over the last decade, Gulf Capital has been one of the most active private equity firms in the Middle East.”

As for its real estate division, Gulf Related, a partnership with the USbased Related Companies, has been able to raise $1 billion over the last two years to fund the launch of the Al Maryah Central Shopping Mall in Abu Dhabi, which looks all set to become “the leading shopping, dining and entertainment destination” in the UAE capital. “One of our smaller yet faster growing divisions is our private debt division, which successfully closed its second private debt fund in December, which was oversubscribed and closed at $250.5 million,” Dr. El Solh adds. 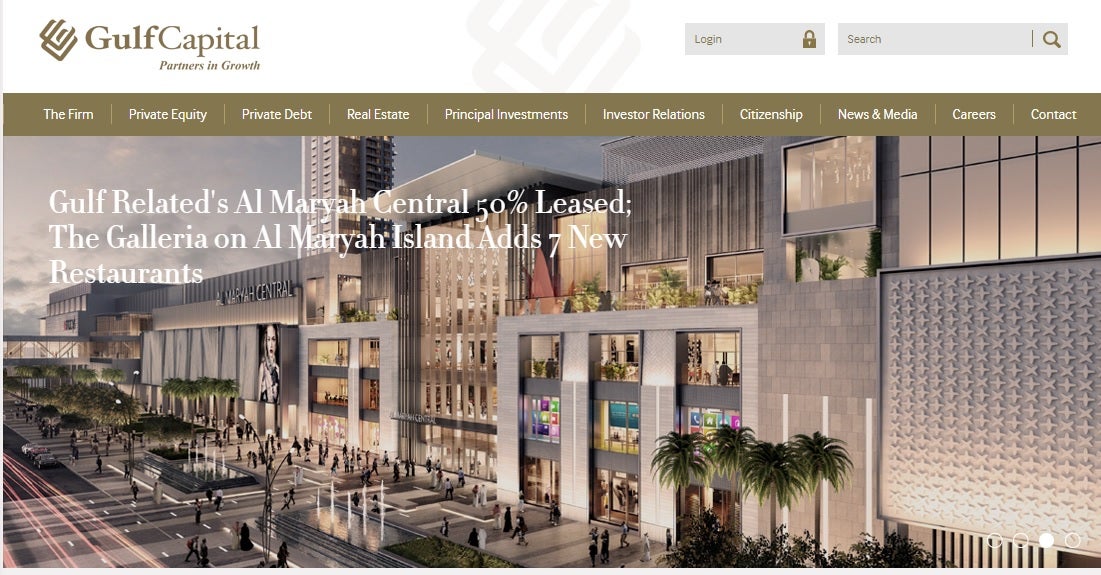 “With over 10 investment vehicles launched to date across asset classes, Gulf Capital has become today one of the largest and most diversified alternative asset managers in the Middle East.” So, what has been Gulf Capital’s secret sauce? “In our investment strategy, we are very focused on picking the right sectors to invest in, as we believe the choice of the sector has a huge outcome on the ultimate success of an investment,” Dr. El Solh replies. “We also ensure that we have the right management team in place to execute the growth strategy of each portfolio company. Last but not least, we ensure that our portfolio companies have access to enough financing and liquidity, so they can execute their growth strategies.”

Of course, following this model means that Dr. El Solh and his team at Gulf Capital have to be sure that their portfolio companies have the right people leading them. “We look for CEOs in our portfolio companies who have deep experience, hunger to grow the business and tenacity to survive obstacles- and there will be many of them,” Dr. El Solh notes. “But we also look for CEOs who have the wisdom to realize when the company is not going in the right direction, and who have the courage to step in and lead so that the company is put back on the right growth path. Once we find the right CEO, we empower him or her, and ensure they have all the required funding and support, so that they can execute on their growth mission.”

1. Know the industry you’re starting up in “Pick the right sector in the right country- these are probably the most important decisions you can make.”

2. Figure out your product “Launch an innovative offering/product that is needed and that can sell itself. If it is too hard to sell and no one cares to try it, it is simply not meant to be.”

3. Build your team “Pick your right partners that you enjoy doing business with and who complement your skillsets.”

4. Focus on the big picture “Launching a business is a marathon and not a sprint– you will encounter many obstacles but should never lose sight of the end goal.”

5. Give back to the ecosystem “And finally, when you make it, pay it forward and mentor other aspiring entrepreneurs. Entrepreneurs in our region need all the help and support they can get.”

Q According to you, what are some of the opportunities that you see available in the market today for entrepreneurs in the Middle East? Is now a good time to start a business in the MENA region?

A “While certain traditional industries such as construction and energy are going through a slow period, there are certain sectors in the new economy that are growing very fast and have a bright future. Our strategy at Gulf Capital is to follow the consumer in the Gulf. We have one of the youngest and fastest growing populations in the world with a very high GDP per capita. As such, we are focused on investing in food and beverages, FMCG, healthcare, education, ecommerce and logistics. These are all promising industries, and I would encourage entrepreneurs to start businesses in these sectors.”