This Franchise's Publicist Loved the Company So Much, She Became a Franchisee

By Stephanie Schomer March 14, 2019
This story appears in the March 2019 issue of Entrepreneur. Subscribe »

Ellie Lamonaca first entered the franchise world as a publicist, whose job was to help a franchise get media attention. But six years into her career, a new client captured her attention in a very different way. It was Conserva Irrigation, a sprinkler-system inspection and services company that helps homeowners and commercial properties cut down on water waste and bills. As a resident of South Florida, Lamonaca immediately understood the value of its business model -- and saw opportunity. She texted her husband, Juan, and suggested they become Conserva franchisees, and in April 2017, the newlyweds opened their first territory, in Fort Lauderdale. They’ve since grown into two territories and are eyeing a third, and they’ve learned the value of investing in a strong team, taking the time to understand an industry, and putting in the hard work.

Ellie, you spent years doing PR for franchises. What about Conserva Irrigation made you want to change careers?

Ellie: When we’d get a new client at [PR agency] Fish Consulting, we’d go to their headquarters for a huge, immersive onboarding meeting. I’d done this a thousand times with brands. Halfway through our Conserva orientation, I started texting my husband because I was intrigued by the concept and knew we could do this.

Juan: Ellie had never previously pitched me on a concept. But we talked for hours after her meeting with Conserva. I work in construction, and we own our own company, and I’ve always known irrigation to be the bottom of the totem pole; it’s where contractors cut corners to stay on budget. So once I understood the concept -- not to mention the professionalism, the branding, the training -- I was in. 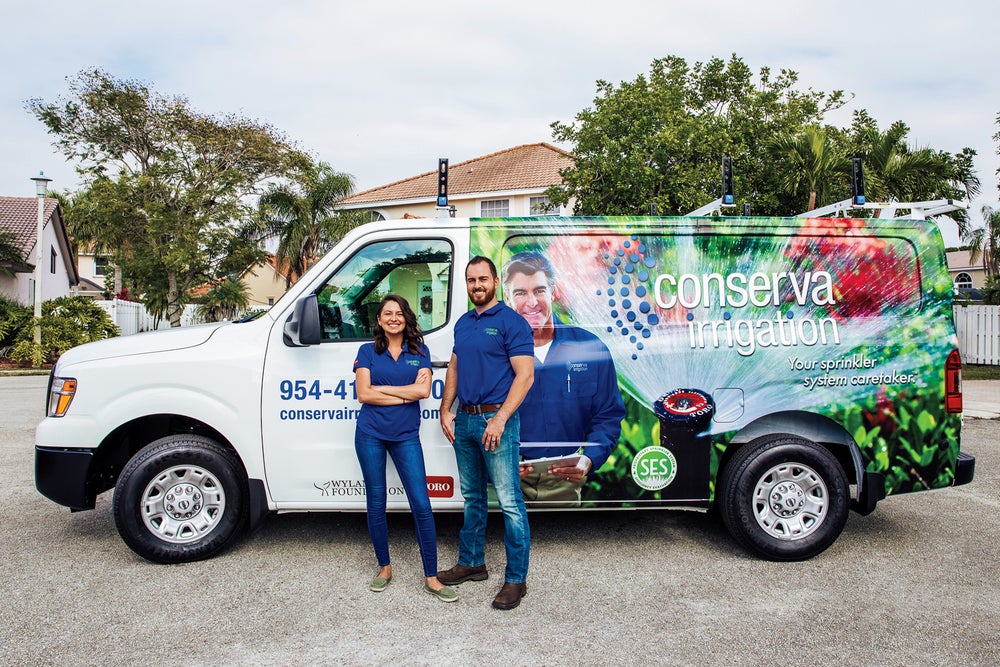 Did you feel hyper-prepared to take this on, or was there still a learning curve?

Ellie: I felt like I had a bit of a leg up -- I had spent almost a year pitching the company to the media -- but no matter what, when you become a franchisee, chances are you’re not an expert in the industry, so of course there was a learning curve.

Juan: When we first opened, Ellie kept her day job, I kept my day job, and we were running our Conserva company at night and on the weekends. We quickly realized that in order to scale and meet the needs of our community, we had to hire a technician. Now we have three on our team.

Has hiring been a challenge?

Ellie: It was one of our biggest lessons. In the service industry, your employees are not just a part of your business; they are your business. We could not have a team that wanted to clock in and collect their paychecks. We needed people who were invested in the success of this business. Once we found them, we had to involve them and incentivize them. We quickly implemented bonus opportunities to keep our team motivated. Other Conserva franchisees gave us great advice: Once you recruit one good person, treat them well and they’ll recruit their peers and people they’ve worked with in the past—and that’s happened! We take a lot of pride in that.

Related: After Nearly Going Bankrupt, How Franchise Jersey Mike's Fought Back and Won

You’re both millennials. How has being young business owners influenced the way you operate your franchise?

Juan: We fall into the stereotype of the hardworking millennials. We work day and night; we’re not 9-to-5. If a customer calls us at midnight, we pick up. And we’re hiring a lot of peers who also relate to that work ethic. Plus, we’re out there with our employees -- we don’t sit in our office. I let our guys handle the situations, but I’m out there with them in the field, and I think that earns us some respect. They’re not laborers -- we all work as a team.