It's a shipping label with a built-in parachute enabling packages to be dropped from a drone in flight.

By Matthew Humphries
May 31, 2017
This story originally appeared on PCMag

Amazon is clearly determined to deliver packages via drone using Prime Air, having already carried out a Prime Air drone delivery earlier this year at the Mars Conference. Now the system has taken another step forward with the awarding of a patent Amazon filed back in 2015.

The patent is for an "Aerial Package Delivery System," but more specifically a new type of shipping label. Why do you need a patent for a shipping label? Because Amazon created one with a built-in parachute.

The sheer volume of orders Amazon handles each day means every aspect of the packaging needs to work as efficiently as possible. This label is no exception. The patent describes a label with self-adhesive backing and containing, "a plurality of parachute cords, a parachute and a breakaway cover." Sensors could also be incorporated to feedback on landing accuracy, and even a shock absorber is mentioned. 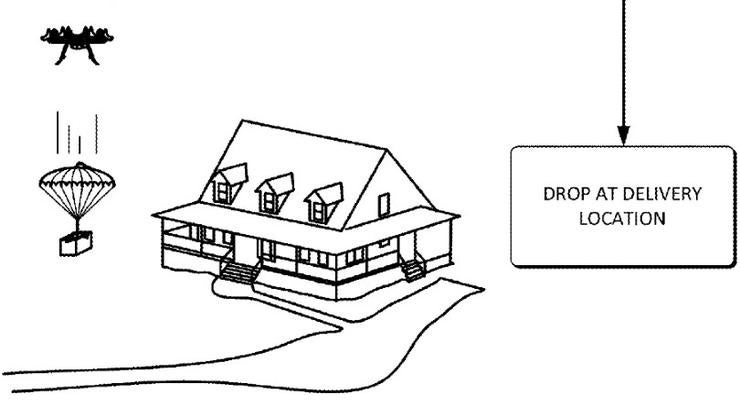 The label would be attached to the top of the package, which then sits against the bottom of the drone in flight. When the package is dropped, the parachute is deployed as the drone releases it, allowing for a steady descent to the ground. For larger packages, there's nothing to stop multiple parachute labels being attached to ensure a safe drop.

Using a parachute makes a lot of sense for drone deliveries. Having the drone descend with the package would require a lot more energy, which would drain the drone's battery quicker. It also puts the drone at risk of being stolen, and people on the ground at risk from being injured by the drone. Dropping packages from a safe height removes those risks, although someone could still get thumped on the head by a falling package.

Amazon is taking drone deliveries and the use of parachutes very seriously. They are even thinking about ways to maneuver a package once dropped, with landing flaps and air canisters mentioned in a patent filing discovered back in February.