A small phone like the iPhone 12 mini could break us out of our pandemic-induced nightly doomscroll. But photography enthusiasts might prefer the huge iPhone 12 Pro Max. Here's what we're working with.

By Sascha Segan
November 11, 2020
This story originally appeared on PCMag

I've been waiting for the iPhone 12 mini for years, it feels like. 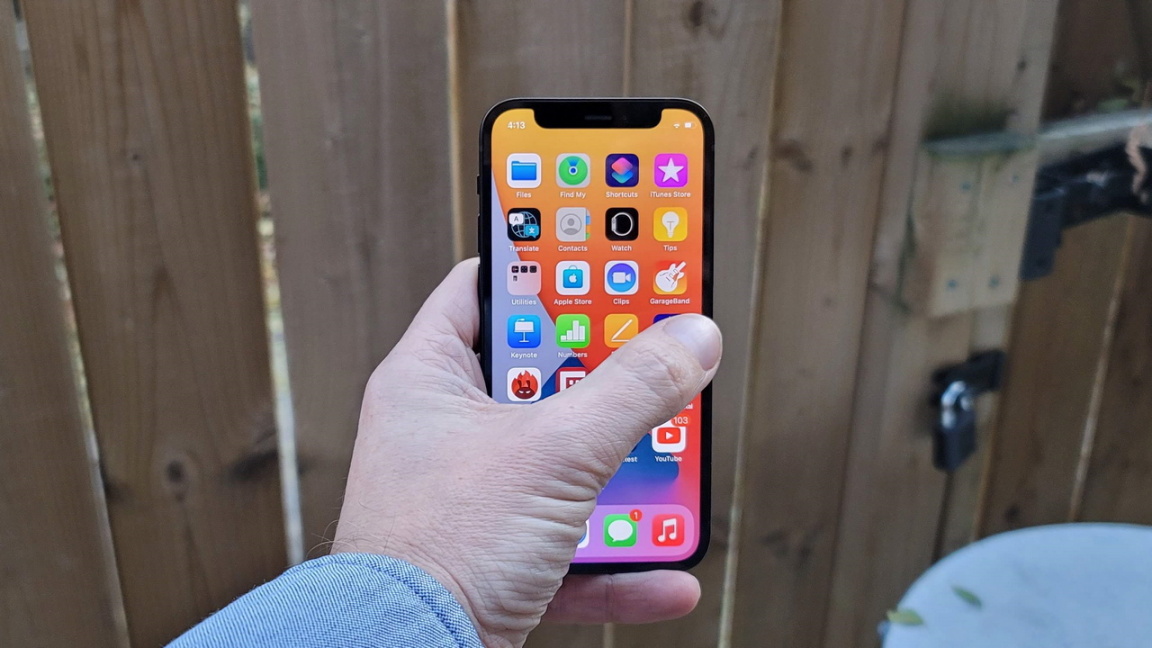 An iPhone you can reach your thumb all the way across: hallelujah.

Phones are too big. They are hurting our brains, our pockets and our society by becoming giant vortexes that suck up all our time and attention. It's gotten worse in 2020, the Corona Year. Last night, I sat on the couch for two hours, vaguely doomscrolling on my giant phone.

A smaller phone speaks to a life that exists outside your phone, and it's the kind of life we need. Smaller phones are designed to be used in one hand while you're holding onto a child or a bag with the other hand — you know, walking outdoors, not huddled under the covers with a big glowing screen trying to fend off the world. 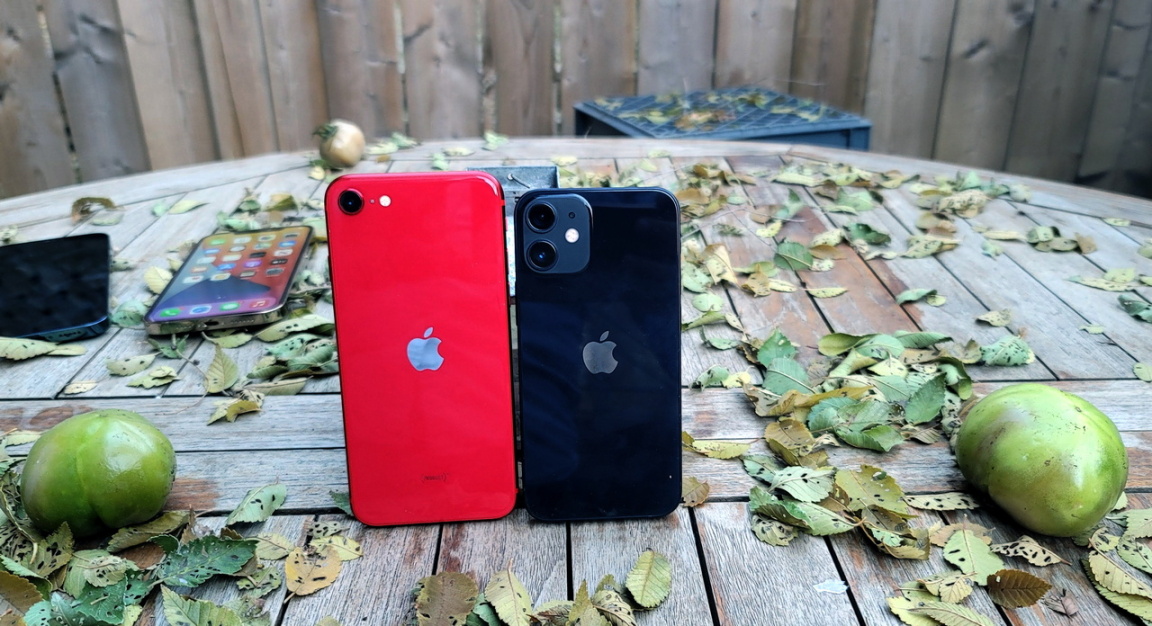 There aren't many high-quality, smaller phone choices. The iPhone SE, which is the same size as the older iPhone 6, has really been the flagship there. (There's also the Unihertz Jelly 2 and Palm phones, which are even tinier, but they don't have premium processors and features.)

At 5.18 by 2.53 by 0.29 inches and 4.76 ounces, the iPhone 12 mini is even smaller than the iPhone SE. Its hard-edged body feels new and modern, not made from recycled components. Yes, there's a little bit of the iPhone 4 (and thus the original SE) in the sharp right angle of its edges, but the unibody form is far smoother and more perfect than it was in the iPhone 4 era.

The 5.4-inch, 2,340-by-1,080 screen has an extremely tight 477ppi pitch, making text small but much sharper than on the iPhone SE's 4.7-inch, 326ppi screen. This phone isn't for people with tired eyes who need large type; it's for people who are out and about, who have other things to do than stare at their phones. Without the SE's giant top and bottom bezels, it has significantly more screen real estate than the SE (or the iPhone 8, 7, or 6) did. On the NYTimes.com website, for instance, that are three more lines of small-type headline. 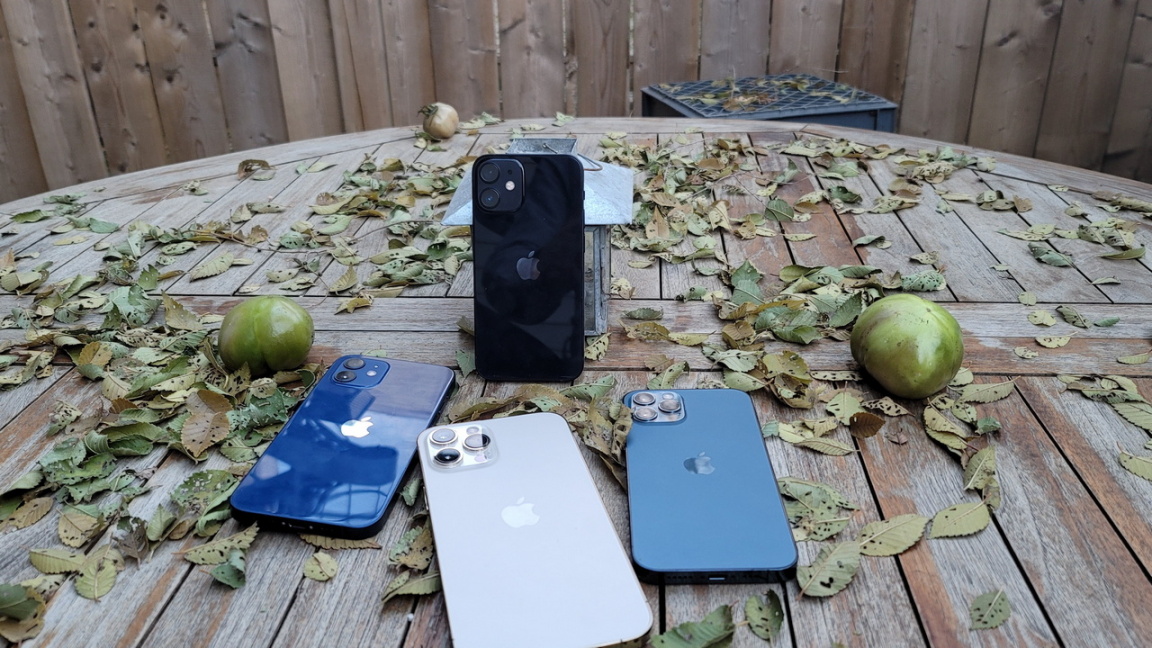 Like the iPhone 12, the mini has a glossy back, so it'll be a little fingerprinty.

According to Apple, it also has all of the features found on the iPhone 12—the same radio bands, the same cameras, the same speedy A14 processor. It's just, you know, smaller and $100 less expensive. I'll have to verify those features, of course.

Early reviews of the mini are out already, so I'm not inventing the wheel here. Battery life appears to be the top concern in many of those reviews. I did one overnight video streaming test, and the mini got over 10 hours — similar to the iPhone 12 and far better than I got on the iPhone SE. The complaints appear to come from more mixed-usage scenarios, so I'll keep an eye on that.

My pandemic brain is telling me: sink back into the couch. Don't go outside. Get sucked in by a big screen. What do you need a free hand for, anyway? But with this week's vaccine news, maybe it's time to dare to dream. 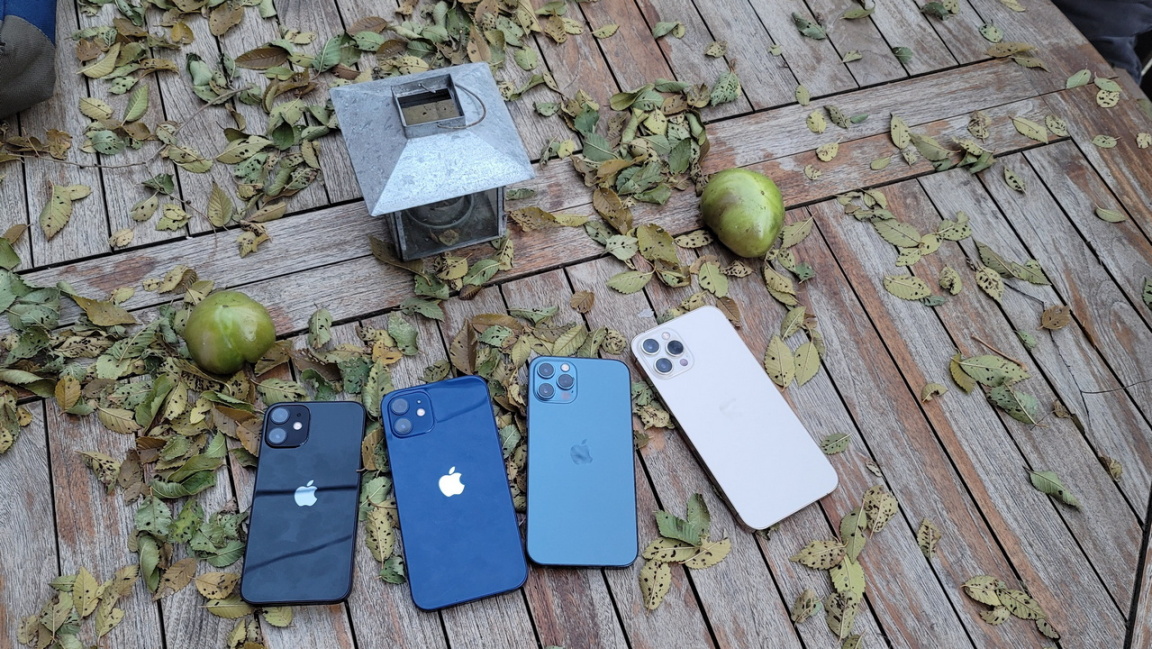 The Pro Max is quite large, at 6.33 by 3.07 by 0.29 inches. It is not larger than the Samsung Galaxy Note 20 Ultra, which is still a touch taller than the Pro Max. I use the Note 20 Ultra as a camera for work; the camera's great, but the phone is impossible to use with one hand. The same thing's going to go for the Pro Max, plus the Pro Max feels very heavy. 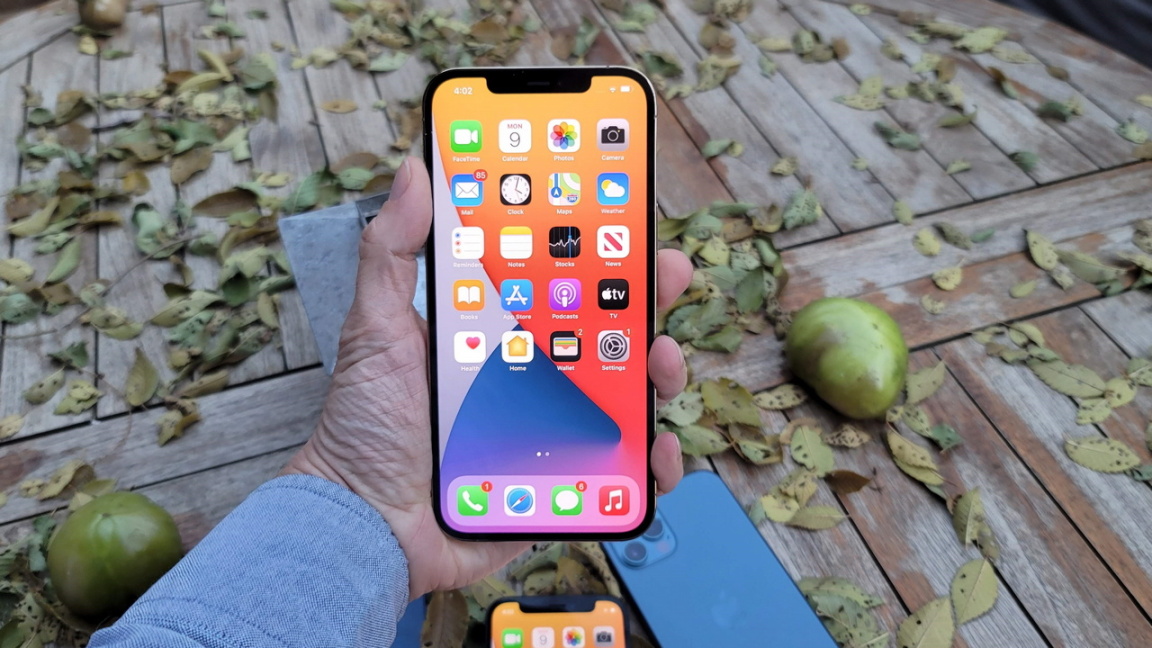 My hand barely fits around the Pro Max.

It's thick and handsome, but thuddingly heavy at over 8 ounces. My model has a shiny gold band around the edge and a white glass back; I keep thinking of the iPhone XS Max, for some reason. The 6.7-inch screen gives you a little more real estate than on the smaller models. Compared to the 12 Pro, I got two more lines of text on nytimes.com; compared to the 12 mini, it was three more lines of text. 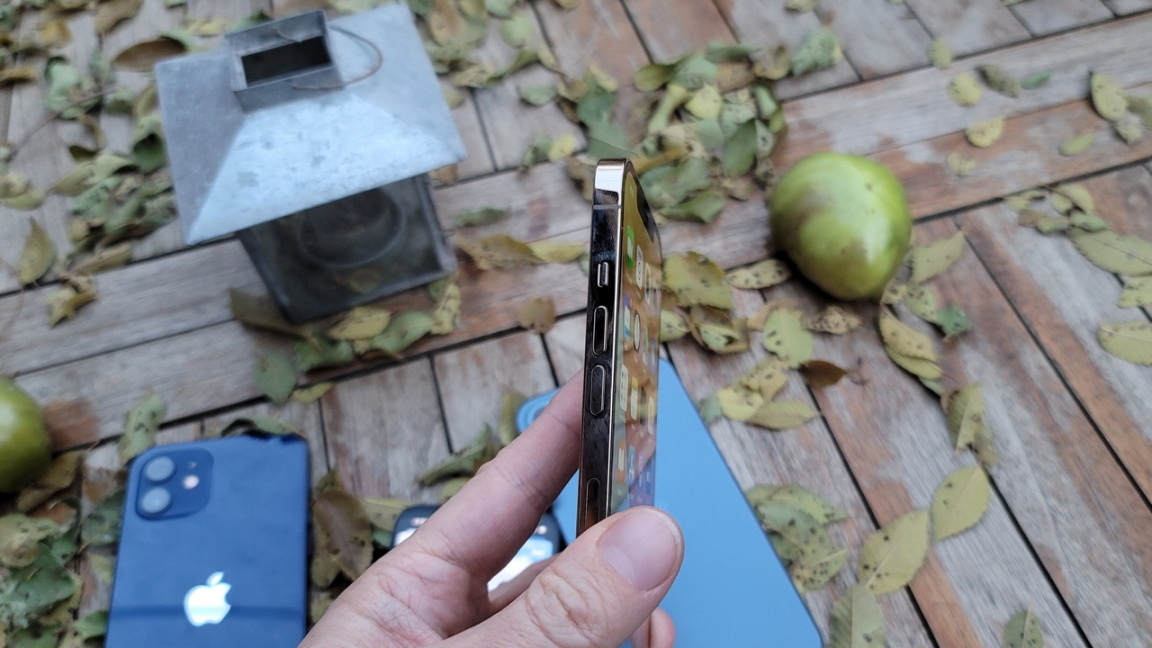 The gold edge is certainly a premium touch.

The Max's advantages will be long battery life — which I haven't been able to test yet — and, on paper at least, a best-in-class camera. Yes, you get an extra 0.5x zoom on the Pro Max, from 2x to 2.5x. Quick tests in low light didn't show a noticeable difference over the iPhone 12 Pro. Yes, yes, I know other reviewers have found a bit of a difference, and I'm obviously going to have to test more. But I came away not feeling like there was a meaningful difference between the Pro and Pro Max cameras, unlike the meaningful difference I've found between the Galaxy S20 series and the Note 20 Ultra. 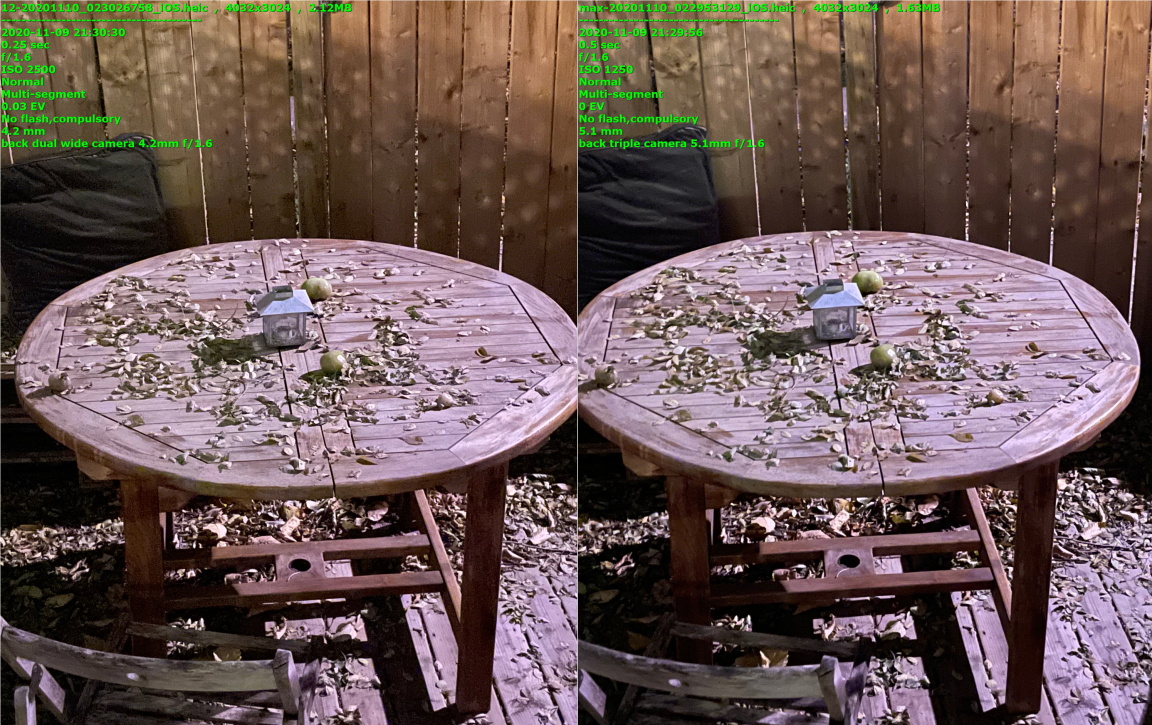 A night shot on the iPhone 12 (left) and Pro Max (right) didn't show much difference between the two phones' main cameras.

I'm not going to be too harsh on the Pro Max, because I know how much phone size is a matter of taste and philosophy. In my 15-year career reviewing phones, the call I most got wrong was the original Galaxy Note, because I didn't understand how many people just wanted big phones. From a photography perspective, big means more stable, too; I see that some of the early reviewers have found it easier to take low-light photos with the Pro Max because it has so much inertia that the sheer mass of the thing keeps the camera from wobbling.

I'll take these two phones out over the next two days to see how their size, cameras, and overall feel compare to the iPhone 12 and 12 Pro. Only one can be our Editors' Choice for this year.