The New Kid Craze: A Tiny, Squishy Toy in a Plastic Bubble 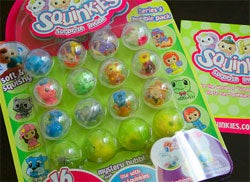 Bill Nichols is making cheap, squishy, collectible animal toys that come in plastic bubbles -- just like what you'd find in a vending machine. He seems to be on to something because his toys, Squinkies, have been sold out in Wal-Mart for the past week. Other stores are putting a cap on how many one person can buy due to overwhelming demand, The New York Times reports.

Hundreds of these critters are yours to collect and they're dirt cheap: buy a pack of 16 for just $10. "With one purchase, a child will become an instant collector," Nichols has said.

So how is Nichols producing the latest craze? He and his team of 16 people in Minnesota have enlisted mommy bloggers to help with promotion.

Before Squinkies launched in stores last August, Nichols reached out to 300 bloggers and gave them free samples; he hoped they'd write reviews. Sure enough, they started gabbing. Another smart move Nichols made was securing a meeting with mega store Wal-Mart. Nichols has owned his toy company, Blip toys, for eight years. He has had enough past success that buyers at big stores, like Target, will talk to him.

Wal-Mart told Nichols they were seeing success with vending machine toys in Japan. After doing some research, Nichols realized that billions of dollars are made from vending machine trinkets every year. Thus his decision to package ths squishy friends in clear bubbles.

Nichols hasn't released sales numbers yet but, if the demand continues, Silly Bandz may be out and Squinkies may be in.

Not sure what the big deal is? Here's why Squinkies are so cool.

Check out more ridiculous ideas like Squinkies that made people ridiculously rich.

For more on this story, head over to The New York Times.

If You Want A Company To Survive, Start It Up In One Of These 20 States