Tips for Clearing Your Computer of Focus-Draining Distraction

Here is how to finally create a distraction-free desktop, so you can focus and get your best work done.

This story originally appeared on NirAndFar.com

By the looks of his laptop, Robbert Van Els could be mistaken for a secret agent. His screen is an explosion of urgent files — a master control center for managing clandestine operatives. The man of mystery persona is typified by a side-sliding sports car winding through an onslaught of Word docs and Jpeg files. Just looking at his desktop can raise your blood pressure.

But Van Els is not a secret agent. He's a mess. 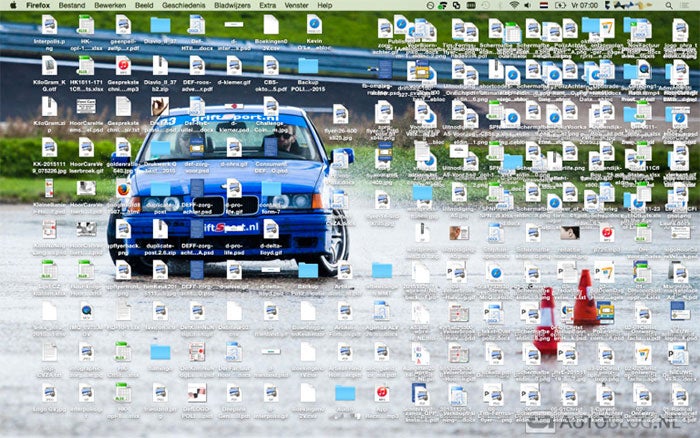 In fact, Van Els' LinkedIn profile says he is in the "custom made earplugs" business. Apparently, there is no correlation between the mayhem on one's laptop and the adventure in one's life. Anyone can find themselves drowning in desktop clutter and research suggests this digital detritus costs us time, degrades performance, and kills concentration.

Van Els decided he'd had enough. He realized if he was going to grow his business, he would have to regain control. "Less distractions, more time to focus," he told me.

I first met Van Els at a conference where I presented a talk on getting "un-hooked" from personal technology. I learned later that Van Els took my presentation to heart. Over Facebook, he shared his "recipe for a minimalist desktop" and reported, "I tested the new layout for a month now and the result works great!"

After inspiring Van Els with my talk, I found he had inspired me as well. I decided to take a look at my own crowded desktop, which although not quite as explosive as Van Els', certainly needed some tidying-up. Here's why clearing your workspace can increase your productivity and the steps I took to achieve laptop zen.

The Cost of Clutter

A cluttered computer doesn't just look ugly, it's also expensive. For one, there are cognitive costs. A study by researchers at Princeton University found people performed poorly on cognitive tasks when objects in their field of vision were in disarray as opposed to neatly arranged. The same effect applies to digital environments according to a study published in the academic journal, Behaviour & Information Technology. Unsurprisingly, our brains have a tougher time finding things when they are positioned in a disorganized manner.

Furthermore, extra distractions act as triggers coaxing us to do unimportant tasks — costing us wasted time and focus. Every errant icon, open tab, or unnecessary bookmark serves as a nagging reminder of things left undone or unexplored. With so many triggers, it's easy to mindlessly click away from the task at hand. But moving from one thing to another, according to Sophie Leroy at the University of Minnesota, hurts our concentration by leaving what she calls an "attention residue." This residue makes it harder to get back on track once we get distracted. Removing unnecessary triggers frees the mind to work on what's really important.

And if you still need convincing, there's yet another price you are paying for all that clutter — sluggish com puting. Every open tab on your web browser for example, utilizes your machine's processing and memory resources. Of course, there are technologies purpose-built to stop unused tabs from sapping resources, but those are band-aids that address the symptom not the disease.

Now that I was certain all those distractions weren't serving me, it was time to implement a clean sweep. First, I dumped everything on my desktop into a folder called "everything" (I know, it's not a particularly creative folder name).

It felt strange stuffing all those files into one folder and I wondered if I wasn't just displacing the mess somewhere else. Then I reminded myself the idea was to remove visible distractions that could take me off course.

I assured myself that if I needed one of these files, it would be easier to find it using Spotlight (the Mac OS' built-in search feature) rather than hunt for each file one at a time on my desktop. In any case, the files I use every day, like particular Word docs, are more easily opened under the "Most Recent" tab anyway.

Next, per Van Els' advice, I changed my background photo to a muted boring grey and made the app dock auto-hide. I also found a program called Bartender 2 to organize all the apps running on menu bar at the top of the screen. Now I start my work day with a blank slate the color of actual slate. 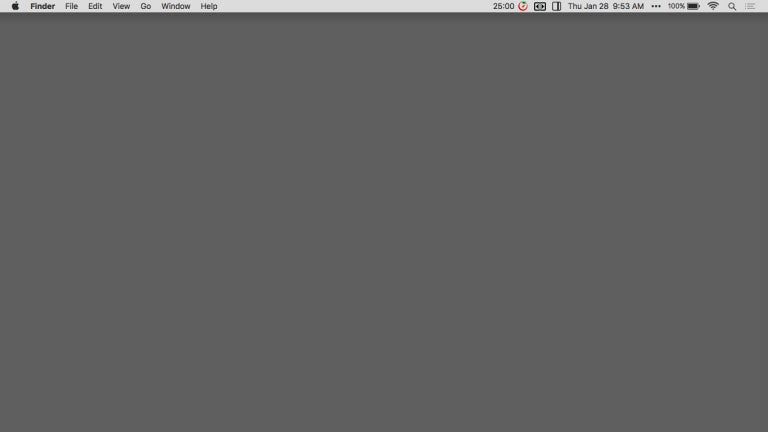 Desktop cleared, I looked for more ways to declutter. I decided to disabled all notifications on my laptop, making sure no apps could interrupt me.

I also set the "do not disturb" feature to always on by making the setting turn on at 7 am and turn off at 6:59 am. 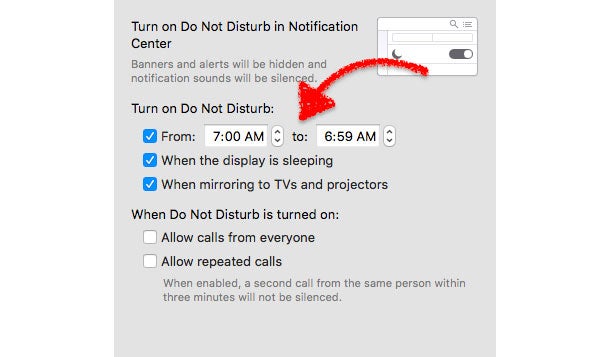 After conquering all the unwanted triggers on my desktop and disabling notifications, it was time to tackle the serpent's den of distractions, my web browser. The first problem was how to deal with all those open tabs? The issue was particularly troublesome because the more tabs I had open, the less likely I was to reboot my machine and web browser, preventing updates and further slowing down my computer. I'd go months without a cleansing restart until my mac would eventually give-up, freeze-up and crash — typically taking down unsaved documents in the wreckage.

I needed a new way of doing things. First, I realized that all my tabs fit into four categories:

The solution was simple — I needed to make a routine of sorting tabs where they belong. For example, instead of leaving web sites related to a current project open day after day, I'd cut and paste the URL into the relevant document — typically a Google Doc or slide presentation.

Next, articles I'd like to read later are never read in the browser. Before I have a chance to get sucked-into the time wasting vortex of reading one article and then another, I quickly save it to Pocket where I can read the article at my leisure or listen to it while driving or in the gym. Finally, the open tabs I worry I might need some day go into Evernote with just a tap of a button on the chrome of my browser. 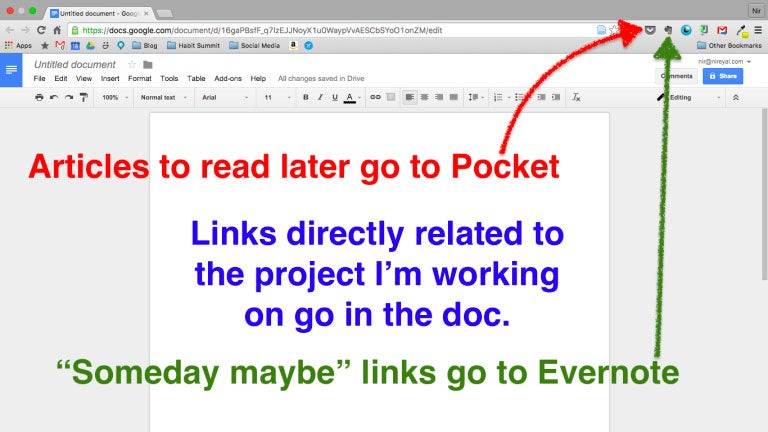 Here again, although it seems like I'm just pushing the mess around it's important to remember that the quantity of digital stuff isn't the problem — it's the visual distraction and clutter that saps productivity and focus. The idea is to get stuff out of sight and out of mind until it's needed. Interestingly, the same categories I used to sort through tabs worked just as well for eliminating many of the bookmarks that polluted the chrome of my browser.

But what about email and social media? Perhaps the worst time-suck of all is the endless stream of messages, notifications, and updates that sap focus and keep us busy with pseudo-work. These services are like chocolate — they're best kept hidden because the more we nibble the more we want.

Given how distracting they are, I try to never leave them open while not in use and I use attention retention tools like StayFocusd and Freedom to block access to my email, Twitter, and Facebook during my morning writing time when I most need to concentrate.

Now that I've removed as much distraction from my laptop as possible, I schedule fifteen minutes every Friday for a "Friday flush" to clear out any clutter that may have accumulated over the week.

As for Van Els, achieving desktop zen has made him happier and more productive. Today, his desktop couldn't be more pristine. He replaced his screeching sports car image and hundreds of icons with simple white letters on a black background.

For me, the hardest part of removing all that desktop clutter was taking the first step. There's some trepidation involved in doing a clean sweep. But the quote on Van Els' screen provided some extra motivation. Though it sounds like a line from a cheesy spy movie, it applies just as well to getting started on any daunting task. "What we fear most is usually what we most need to do." 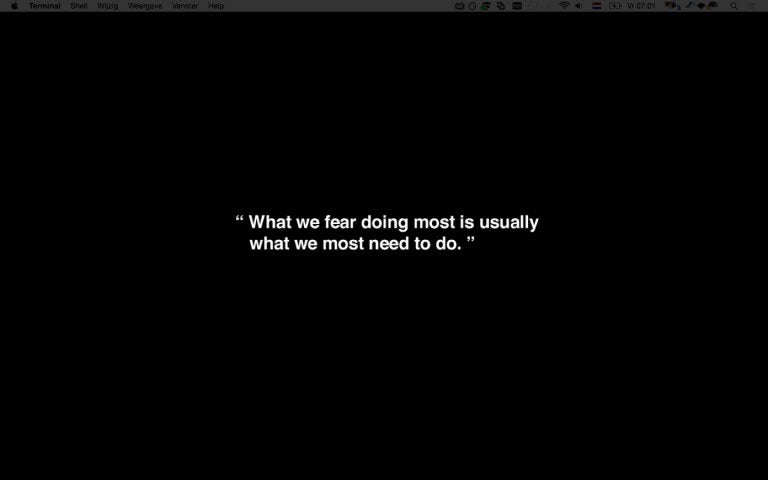 Nir Eyal writes about the intersection of psychology, technology and business at NirAndFar.com. He is the author of Hooked: How to Build Habit-Forming Products. For more insights into how products change behavior, join his free newsletter and receive the first chapter of his book.

How Promotional Pricing Devalues Your Brand

Promotional pricing and discount pricing strategies can cost brands millions in lost sales by promoting unprofitable buying behavior. This article will discuss the long-term impact discounts can have on a brand.