Walmart Pulls 'KKK' Boots Off Its Website. 'The Item Is Inconsistent With Our Values.'

Walmart Marketplace is a popular destination for third-party companies to sell their products through the retail giant's website. But one item slipped through the cracks recently, causing quite a controversy.

A pair of men's hiking boots with a bright red "KKK" logo written on the tongue appeared on Walmart's site. KKK is an abbreviation frequently used by the white supremacist hate group, the Klu Klux Klan. 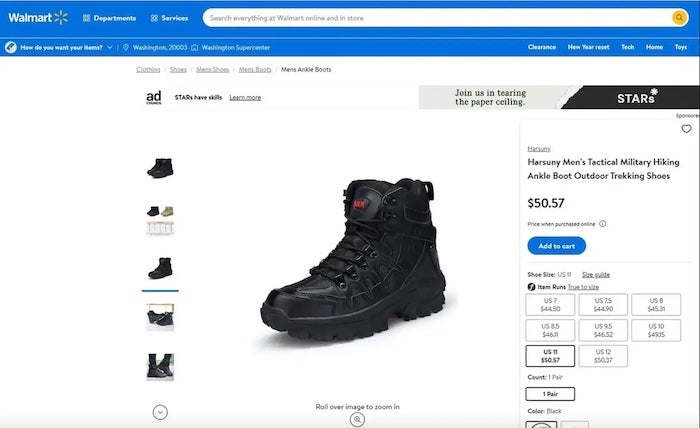 The Council on American-Islamic Relations (CAIR) alerted Walmart about the shoes to "respectfully ask that they be removed," according to Insider.

The store yanked the offensive boots off the site soon thereafter.

"We thank Walmart for dropping an online listing for oddly/poorly named "KKK" boots after we brought this to their attention," said a CAIR in a press release.

The boots have an impossibly long name, Harsuny Men's Tactical Military Hiking Ankle Boot Outdoor Trekking Shoes, and sell for around $50. It is unclear if the company selling the boots is called Harsuny or if they have a racist agenda. At press time, no further information about the manufacturer has been released.

A spokesperson for Walmart told Best Life, "This item was listed by an outside third-party seller and removed because the item is inconsistent with our values and violates Walmart's prohibited product policy."

Like its chief competitor, Amazon, Walmart Marketplace allows third-party companies to sell their merchandise on its e-commerce site in exchange for a percentage of the profit.

In the case of the KKK-emblazoned boots, the system failed to detect an offensive item before it appeared on the site. Walmart wants to know why.

"We are reviewing how this happened and will apply what we learn to further improve our rules and processes to prevent the sale of inappropriate merchandise," they said.