What Can Marketers Learn From Quibi's Failure?

Ultimately, it doesn't matter if you've got billions of dollars. You cannot spend your way out of a fundamental mistake.

By any metric, Quibi is a failure.

The mobile-video platform hit #1,477 in the IOS app store's rankings in early June. Advertisers are renegotiating due to low viewership. Even founder Jeffrey Katzenberg expressed disappointment. Two months after launch, he stated that, "It's not up to what we wanted. It's not close to what we wanted."

Related: Quibi Is Shutting Down After 6 Disappointing Months

They had the leadership. Jeffrey Katzenberg and Meg Whitman are at the helm. They're two of the biggest names in tech and entertainment. Katzenberg co-founded Dreamworks. Whitman was the CEO of Hewlett-Packard and eBay. A short-form mobile-video platform should be up their alley.

They had the money. The duo raised a $1.8 billion war chest. A who's who of Hollywood and tech invested, including Disney, NBCUniversal, Sony, Viacom, WarnerMedia, Lionsgate, MGM, Alibaba Group, Goldman Sachs and JP Morgan.

COVID-19 should have helped them. Due to quarantine, screen time increased dramatically. U.S. mobile usage increased 23 additional minutes, and 10 of those minutes were on mobile video. Quibi offers programs in five-to-10-minute chunks.

Related: Do Quibi's Problems Come Down to a Confusing Name?

In spite of these ideal market conditions, Quibi is imploding. Two months after launch, Quibi had 1.3 million active users. For perspective, Disney+ generated 41 million installs in the same time period.

How could Quibi fail? By all accounts it had the wind at its back.

The answer: a complete misunderstanding of their consumer.

Quibi was touted as having "fresh content from today's biggest stars." Neither was true. Quibi's target audience is 18-34-year-olds. You wouldn't know it by looking at its content. It feels like it was curated by grandparents. Well meaning, but out of touch, grandparents who think that MTV is still what "the kids are into these days."

At least those shows were relevant for some of Quibi's target audience. They just added a 60 Minutes spinoff, 60 in 6. No disrespect to 60 Minutes (it is a great show), but I have a hard time imagining anyone eager to pay for an extra six minutes of it, let alone 18-34-year-olds. In fact, the median age of a 60 Minutes viewer is over 60.

So Quibi made some odd programming choices. Surely they delivered on their promise of "today's biggest stars." Right?

Quibi is stacked with traditional celebrities including Laura Dern, Reese Witherspoon, John Travolta, Patton Oswalt and Idris Elba (to name a few). All are incredibly talented. However, they're all lacking one really important thing: any relevance or star appeal to the target. They have awareness, but awareness doesn't lead to passion. Passion doesn't lead to sales.

Who is the target passionate about? Is it big Hollywood movie stars? Is it Reese Witherspoon and John Travolta? No. It's digital influencers. They're the biggest stars to Gen-Z. Not traditional celebrities.

Who is the most influential person amongst teens? According to research from Piper Sandler, David Dobrik is. Gaming Streamer Ninja gets more social media mentions than any professional athlete. The most desired job among teens is to become a YouTuber. Quibi's audience does not want to be movie stars, nor do they care about them. This is not new information.

Reese Witherspoon is a talented actress. Is she the reason millions of 20-somethings pay for a streaming service? No. She's not. However, they'd probably do it for Dobrik.

So what could Quibi have done?

Emily Nussbaum, a staff writer at the New Yorker, recently asked her Twitter followers that same question. One VC replied that Quibi should get Dobrik and MrBeast (two popular YouTubers) on the platform. He expounded that Quibi should give MrBeast "a massive budget and watch him create magic."

MrBeast's manager replied, and it turns out that they did pitch a show to Quibi … and were turned down. 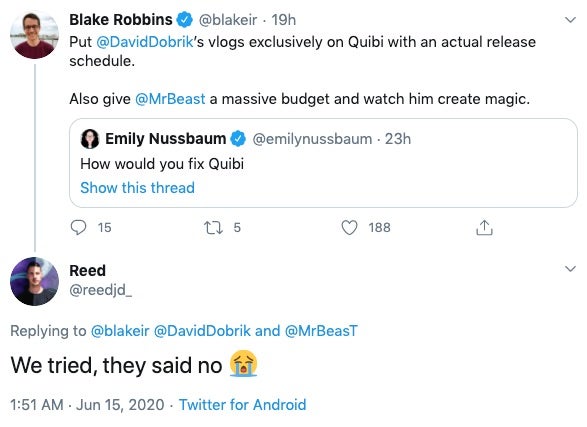 This should have been a no-brainer for Quibi. If you want to draw in millions of viewers, wouldn't you want to work with someone that has a proven track record of doing that? MrBeast isn't just a YouTuber with a large following. He's a one-man media empire. To say passing on MrBeast was a mistake is an understatement.

For context, MrBeast (real name Jimmy Donaldson) is a YouTuber known for outlandish giveaways and stunts. For example, he once tipped his pizza delivery guy a house and recently built the world's tallest Lego tower. His channel has 37 million subscribers and nearly six billion views.

There are more 18-34-years-olds watching MrBeast than all of Quibi. At this stage, Quibi will be lucky if they get 30 percent of the way to their first-year subscribership goals.

What's the lesson marketers can learn from this mess?

The reason for this utter mess is that Quibi ignored their target customer. They didn't take the time to invest in, and learn, what 18-34-year-olds care about.That's why they went with traditional stars instead of digital stars. It's why they're rebooting shows from 20 years ago.

You cannot spend your way out of a fundamental mistake. This is marketing 101. Know your consumer.

Brendan Gahan is partner and chief social officer at independent creative agency Mekanism. Gahan has been at the forefront of social and influencer marketing since 2006, was named to the Forbes 30 Under 30 list in 2012 and sits on the Vidcon Advisory Board.