By Katie Little
October 4, 2014
This story originally appeared on CNBC

Lightweight, ubiquitous and much maligned, the plastic bag is under fire.

Its role in pollution has sparked a statewide ban in California, but this good-intentioned measure could have unforeseen consequences.

As part of the ban, grocers and pharmacies can no longer provide single-use plastic bags to customers beginning next summer. Instead, they must charge at least 10 cents per recycled paper bag or sell a reusable plastic bag.

Mark Daniels, chairman of the American Progressive Bag Alliance and senior vice president of sustainability and environmental policy at bag-maker and recycler Hilex Poly, stressed the economic consequences of the ban for both businesses and shoppers. 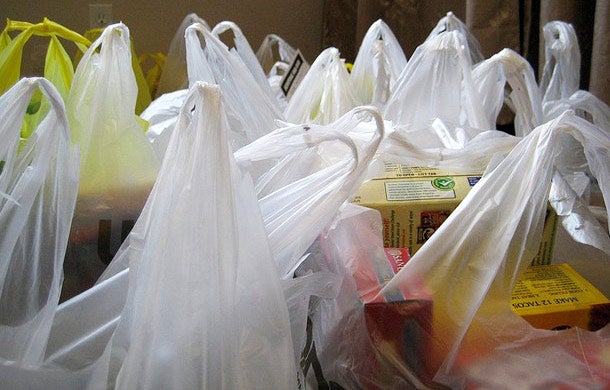 "It's a transfer of wealth of hundreds of millions of dollars from Californians to the pockets of grocers and their union bosses," Daniels said in a phone interview. "It's exporting 2,000 jobs from California to China where they manufacture the reusable bags."

Calling the law "a gift from the legislature" to grocers, Daniels estimates grocers will make at least 5.5 cents from each paper bag sold.

Many members of the Neighborhood Market Association, a group of independent retailers in California, Nevada, Arizona and the West Coast, don't plan to charge their customers who often live paycheck to paycheck for the bags, said its president and CEO, Mark Arabo.

He stressed that the law presents a headache for smaller grocers who don't have the resources for compliance with the ban and that it could spark an uptick in stealing.

"We see that when folks come into grocery stores with their own bags, we see an increase in shoplifting," Arabo said.

One supporter of the law, Ron Fong, president and CEO of the California Grocers Association, insists it won't have unintended consequences. Because grocers have faced plastic bag limitations in various areas for years, they've had time to see what works and what doesn't, he said.

"There's an initial learning curve—more than anything, it's getting our customers used to the idea," he said by phone. "Our stores have thought this out."

As far as the criticism that the ban lines grocers' pockets, Fong insists they won't be profiting from the new law and need the money to cover costs.

On a lighter note, Fong also addressed potential concerns from animal lovers, who now face possible additional expenses for tidying up after Fido multiple times per day, saying there are other options and produce bags are not impacted.

"People will find a different alternative. I don't have any facts or figures as to what the alternatives for dog lovers are, but we'll have to figure that one out too because we have a dog," said Fong with a laugh.

There's evidence that bag bans cause sales declines in areas near places that lack a ban.

A 2012 study from the National Center for Policy Analysis (a group backed by a number of major conservative financiers) examined the effects of a Los Angeles County bag ban impacting large grocers and retailers.

The report noted jobs inside the ban area were also negatively impacted.

The emphasis on reusable bags may have unintended health consequences too.

A separate 2011 report published by the International Association for Food Protection examined the possible health risk from reusable shopping bags after collecting bags at random from grocery store-goers in California and Arizona.