It'll also let you know if businesses have been the targets of racism.

This story originally appeared on Engadget

Yelp wants to help its users make better decisions about the places they're looking up and is rolling out a new feature today that will alert people if a business has been associated with "egregious, racially-charged actions." These labels will be added to pages that see a rise in reviews based on what people have seen in the news or social media rather than first-hand experiences. Yelp will also include a link to an article explaining more about the incident that caused the business to catch attention for racist conduct. The labels don't just tell you about places accused of racism — they'll also alert you to those who were victims of it. 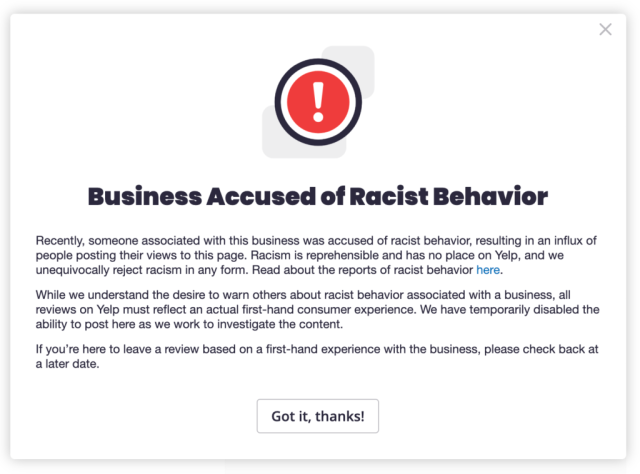 Yelp said its user operations team has already been placing these alerts based on an increase in the number of reviews citing news or social media, so these new labels aren't an entirely new concept. The difference is that the company will now flag places that have been accused of using racist language or symbols and other such actions.

Related: All the latest innovations on Yelp

When it first notices a person associated with a business has been a target or accused of racism, Yelp will add a Public Attention Alert to that company's page "to warn consumers that the business may be receiving an influx of reviews as a result of increased attention." If a business has been accused of "overtly racist actions, where we can link to a news article," Yelp will use its "Business Accused of Racist Behavior" label instead.

Yelp is relying on news and social media reports in this process partly to warn people about the possible influx of fake reviews affecting a business' ratings in these situations. "It's always been Yelp's policy that all reviews must be based on actual first-hand consumer experiences with the business," the company said in its news release. "This policy is critical to mitigating fake reviews and maintaining the integrity of content on our platform. We don't allow people to leave reviews based on media reports because it can artificially inflate or deflate a business's star rating."

According to Yelp, up till this point in 2020, it's already seen a 133 percent increase in "media-fueled incidences" compared to the same time last year. "Increasingly, consumers across the U.S. are voting with their dollars by supporting businesses that align with their values," the company said. "As always, we continue to evaluate how we can best use our platform to build a better, more equitable and inclusive environment."