It's one thing to be an iconic luxury auto brand; it's another thing altogether to be an iconic luxury auto brand that can boast of a 16-month run of consecutive growth. With the latter being what Cadillac announced in September this year, it's a nod to how this New York-headquartered brand has been making its presence felt- and no, this isn't a phenomenon that's restricted to the United States; it's happening around the globe, and yes, the Middle East is indeed a market where the company has been making "significant gains." So, with that being said, what's been fueling Cadillac's rise as a brand?

Christian Soemmer, Managing Director, Cadillac Middle East, puts it down to an apparently basic formula. "Pure and simple: it's great products, great communication and great service," he says. "First and foremost, without a great product, you cannot compete in the luxury space. For us, it's about having a relentless attention to detail, combining refined driving dynamics with purposeful technology that makes the experience of being in a CT6 prestige sedan, for example, something quite special. Secondly, there is little use in having a great product if you don't convey this properly; so, for us, it's about inviting the people of the Middle East into our world through our channels, whether that be marketing campaigns, social media, or sponsorships, through to the experience at the dealer. And on that note, it's these interactions with our people on the showroom floor that really make the difference in this region. This is why we introduced a certification program for showroom staff that holds them to our high standards of customer service. Together, I believe that products, communication and service are what gives us a competitive edge in the Middle East, and our other markets around the world."

Related: Standing Out: Ensuring A Stellar Customer Experience Is Key For Brands

Having been at Cadillac for nearly a year now, and having previously worked at Audi Middle East for seven years, Soemmer has obviously been privy to the vagaries of the region's luxury auto market, which has been, by all accounts, a rather challenging space to navigate for quite a while now. But Soemmer notes that while growth in the industry may have cooled over the last year, Cadillac has been making conquests in the region all the same, by introducing new people to its particular take on sophistication. "I think we've done some great work in the last year in communicating who we are; an automaker that's a risk taker, as one that doesn't follow the pack, and one that subsequently creates exciting and unique vehicles," Soemmer explains. "And this is what has driven independently- minded people to include our brand into their consideration set. I often hear about instances where people have sat in a Cadillac for the first time, and from there, they're hooked. We're looking forward to this happening more and more in the coming year."

Of course, what helps Cadillac in this regard is its particular sense of distinctiveness- just turn your attention to its lineup today (which includes the Escalade, XT5, ATS and CT6) to get a feel of this particular characteristic. "We're seeing people in the Middle East really identify with and respond to the fact that we're doing something different, producing cars that don't look or drive like anything else out there," Soemmer notes. "We're taking the best lessons we've learned over the last century in terms of engineering innovation and creating head-turning design, to embody what we see as a new type of luxury– one that's bold, and sophisticated, and authentic." And Cadillac has made sure that its new values are communicated to the world, all of which are centered around its "Dare Greatly" ethos; be it with its own marketing campaigns, or with the events that it has associated itself with.

For the former, look no further than "Arabs of New York," the slick marketing campaign that Cadillac launched in September showcasing entrepreneurial figures like Emirati composer Mohamed Fairouz and Lebanese architect Michel Abboud who have made it big in The Big Apple. ""Arabs of New York,' which showcases real, young, ambitious, talented people from this region that are making it big in Cadillac's home of New York City, helps to bring Cadillac's reinvention full circle for us," Soemmer says. "In its truest sense, it captures what entrepreneurials are about– millennial era, gogetters who are moving the world forward. We wanted to do something relevant for the Middle East, which is why it was so important to be able to showcase the next generation from this region who embody this spirit."

At the same time, Cadillac is making sure to get itself aligned with events and programs in the region that share its values, and Soemmer notes that such efforts are already paying off for the brand. "By using a different look and approach in our communication, and by partnering with like-minded ambassadors and events like the STEP Conference and Sole DXB, we feel that we are showing our true selves," he says. "We're not necessarily portraying ourselves as just a luxury auto brand, but as a luxury brand, full stop. We think that people connect to this authenticity, and clearly, we have received a warm reception from optimistic, sophisticated, and bold people, who feel that Cadillac reflects their own image and values."

Of course, it's not all just about how Cadillac presents itself to the world- the company is also making heads turn thanks to its starring role in shaping the future of mobility, and this is particularly noteworthy when you consider that these innovations are being spearheaded by a brand that was born in 1902. "Cadillac is well and truly involved in shaping the future of mobility," Soemmer explains. "For instance, this year we launched Super Cruise– our autonomous highway driving feature in the 2018 CT6 in the US. Unlike other driver assistance systems, Super Cruise utilizes two advanced technology systems -a driver attention system and precision LiDAR map data- that bring new aspects of safety and intuitive control to further elevate freeway driving. While the system requires drivers to be alert at the wheel, it allows for hands-free driving, and impressively, one of our Super Cruise enabled CT6s recently completed a journey from New York to Los Angeles completely hands-free. It was the first official handsfree cross-country drive ever done."

With features like these to boast of, the CT6 has been praised for everything from "reinventing driving" to being declared "a technological leap step forward in the long march to full autonomy," all of which is a testament to the future that Cadillac is crafting for itself. With respect to the Middle East market specifically, Soemmer notes that technological advances aside, path breaking changes in the region could help elevate Cadillac as a brand as well. "The most exciting trend in this region for the year ahead is, of course, the royal decree allowing women to drive in Saudi Arabia," Soemmer notes. "This is one of our largest markets, and this monumental change offers a lot of potential for our brand in 2018. Our motto at Cadillac is "Dare Greatly,' which may resonate with the women in Saudi, who choose to take the new step of getting behind the wheel."

The future does look promising for Cadillac in the Middle East, and Soemmer, for his part, is excited about the road ahead. "It's a once-in-a- lifetime opportunity when you get handed a 115-year-old iconic luxury brand, and asked to lead its reinvention here in the Middle East," he says. "It's a big responsibility, but the great news is that the sky is the limit. Together with my team, we're looking to disrupt the business, we're looking to innovate, and we are taking our "Dare Greatly' motto to heart, as we come up with new ways to approach to the previously traditional automotive business. Daring greatly is not just a tagline to us: it is a mindset, and it's a culture. It has to be led from the top, and it needs to be genuine and authentic. It has helped us to create an environment that is both motivating and inspiring, where great ideas are not shot down, because the execution is deemed too hard or unachievable. I am open to any creative, innovative ideas, and it doesn't matter if it's influenced by the non-automotive industry. One of my favorite leadership philosophies comes from the great Nelson Mandela: "It always seems impossible, until it's done.' There is so much truth and courage in this, which sums up the Cadillac way perfectly." 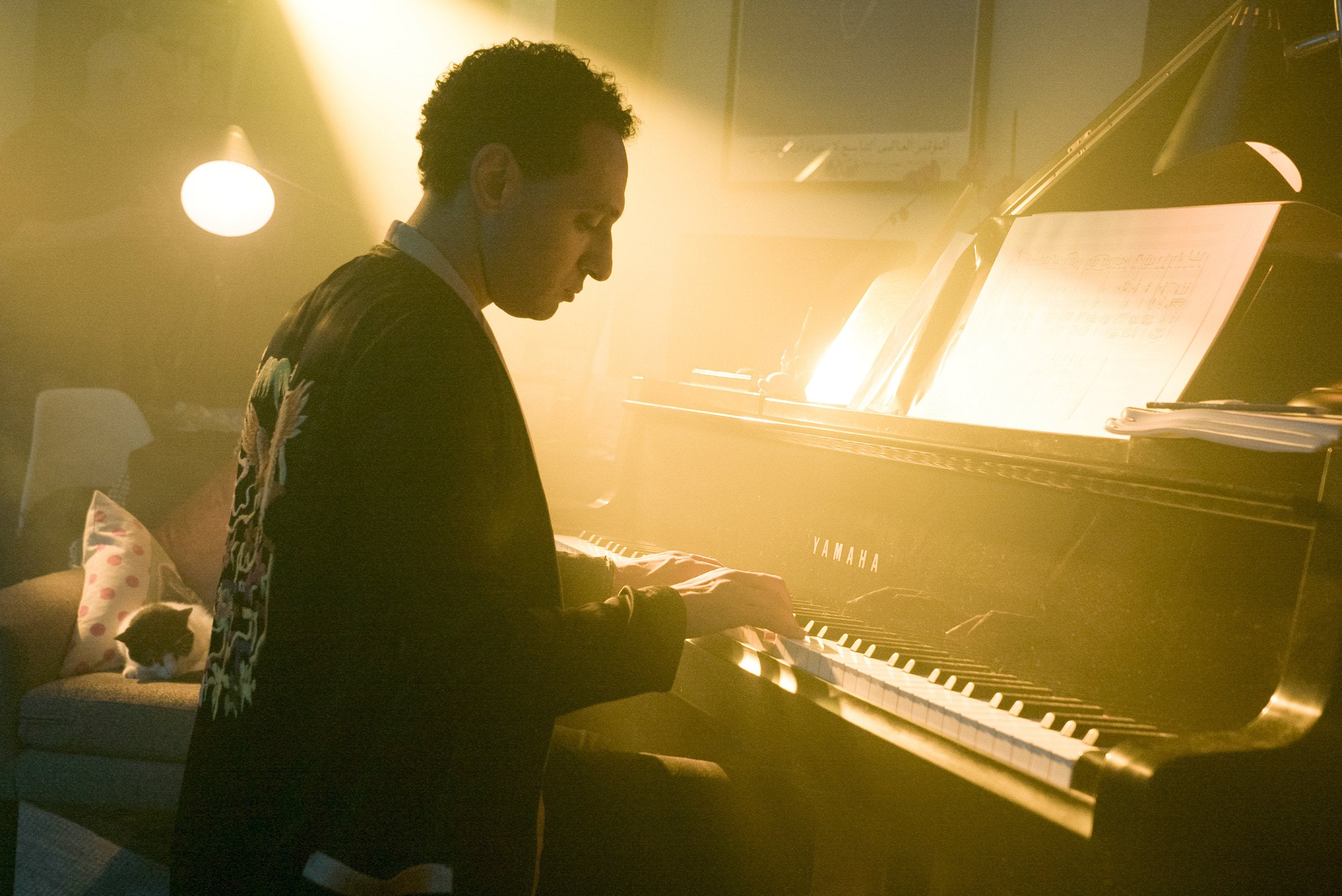 1. Keep your eye on the prize "So many ventures fall flat when entrepreneurs get swept up in all the great possibilities of what could be that they lose focus on what is doable. Consider what makes sense and prioritize."

2. Be flexible "Although it's important to stick to your guns, as Darwin mentioned, it's not those who are necessarily the biggest or strongest that thrive, it is those that can adapt to their environment."

3. Network, network, network "You never know when opportunity may come knocking, or when an acquaintance may prove to be particularly helpful. Keep communication lines open, foster relationships, and try to learn not only from the best, but from as many people as you can."

4. It's never too late "The founder of Cadillac, Henry Leyland, was 59 years old when he established the brand in 1902. Now, 115 years later, we sell over 300,000 vehicles a year, all over the world, and we are still growing. His passion and vision were a formidable driving force in our success."

5. Be brave "As we say at Cadillac, "Dare Greatly.' If you don't change, nothing will."

Can you give us a rundown on the models under the Cadillac portfolio that are especially popular in the MENA market?

"In most of our markets, the ever-popular Escalade continues to be our bestseller, due to its iconic status and being in a league of its own when it comes to high-end, full-sized SUV luxury. Second on the list comes the newest addition to the Cadillac family, the XT5 crossover, which had its international debut in Dubai, and has picked up where the immensely successful SRX left off. Rounding out the top four are the ATS Sedan, which is renowned for its driving dynamics, and acts as a great introduction to the Cadillac lineup, and the newly launched CT6, which is packed with premium features such as massaging seats, a 32-speaker Panaray audio system, and redefines what it means to ride in or drive a prestige sedan."