This Duo Struck Franchise Gold With Drybar. Now They're Out to Conquer an Entirely New Industry.

Alli Webb and Brittany Driscoll are on a mission to change the massage industry and have some wise words about bringing your best ideas to life, rebuilding momentum and the secret to lasting business partnerships.

Good ideas are a dime a dozen, and for Alli Webb, having a good idea is just a fraction of what it takes to be an entrepreneur.

"It's funny how many people have said to me over the years, 'Why didn't I think of this?' It's like, 'Well, you probably did, but it probably ended there,'" she says.

In 2010, Webb, a professional hairstylist by trade, and her brother Michael, a longtime businessman, founded what would eventually become a nationwide sensation: Drybar.

What started as a way to revolutionize the concept of getting a blowout — making it simple, affordable and easy — grew into a phenomenon that swept the nation and now has more than 150 locations across the U.S.

But Webb's innate drive to improve systems didn't stop with haircare — even after selling the company's product business to Helen of Troy for $255 million in 2020 and its franchise business to WellBiz Brands in 2021. In fact, Webb was still in the trenches at Drybar when the next big idea came.

"The thing I always think about is, What is something out there that you love, and it exists, but it's just not done well?" Webb says.

She's been a massage enthusiast for as long as she can remember, but she was dissatisfied with what was out there — from the hassle of scheduling appointments to never feeling like the decor or atmosphere was right. "I like certain things, but I would always forget to tell them," she says. "And then there are brands or specialists who come to your house, but that's so expensive." Webb saw an opportunity to shake up the industry and streamline the process from beginning to end — making the luxury more accessible to everyone.

"I'm a big believer in surrounding yourself with people who are smarter than you."

Webb knew she couldn't build her vision alone. So she turned to Brittany Driscoll, whom she had worked with for years as Drybar's VP of marketing, to bring that vision to life. The key to lasting, productive partnerships, Webb believes, is humility. "I'm a big believer in surrounding yourself with people who are smarter than you," she says. "Michael and I recognized early on that we were not great operators or managers. With Brittany, we knew from experience that she was going to be the person that could really get this thing where it needed to go."

Together they build Squeeze, a tech-forward massage franchise that allows customers to book appointments, set personal preferences, pay and tip all through the app — minimizing the hassle of scheduling and creating an experience catered to each individual's preferences.

Although Driscoll says Squeeze is Webb's "brainchild," Webb calls it Driscoll's "baby." The way each of them speaks on the other's strengths and expresses gratitude for the partnership mirrors the mission at Squeeze's core: helping others feel good so that they can do good.

Related: This Drybar Entrepreneur Stresses How Important Good Culture Is for Company Success

Aside from Squeeze's aim to celebrate each individual who walks through its doors, Driscoll knew from the outset she wanted to take the mission one step further. "I just believe that we're all the best version of ourselves — and more motivated — when we are a part of something bigger than ourselves," she says.

Driscoll started thinking about the benefits massages offer — building confidence and empowering individuals to prioritize self-care — and began researching philanthropies that offer a similar experience. She stumbled upon Canine Companions, which provides individuals with service dogs free of charge. It was exactly what Driscoll was looking for.

At the time, Squeeze didn't even have a website, so Driscoll took a chance and cold-called the philanthropy. When a woman answered, she took a leap of faith: "By any chance have you heard of…Drybar?"

"I thought, 'Let me just start with that because that will at least give me a little bit of credibility and hopefully you won't hang up on me'," she says.

Driscoll was explaining Squeeze's mission and her desire to partner with the organization when the woman interrupted her and said, "You're not going to believe this."

"She told me, 'One of the commands that the dogs are taught to do when people are having physical episodes or anxiety [is to] climb on top of them and give them a little squeeze'," Driscoll recalls. "I always get chills when I tell the story. It was just instant. It was so clearly meant to be."

For every membership sold, Squeeze is helping to provide a day of canine support to a person with a disability.

"I think if it were easy, everyone would be doing it."

Everything was aligning. Two years after the team got to work on the concept, Squeeze opened its first location in the Studio City neighborhood of Los Angeles in 2019, and it awarded its first three-unit franchisee deal in Denver only eight months after it was opened. Then, the pandemic hit. Like most service businesses, it was forced to close down. The Denver deal was put on hold.

Although navigating the uncertainty of the pandemic and the business was difficult, the hardest part actually came after the dust settled. "Rebuilding momentum is probably one of the hardest things, almost harder than starting something from scratch," Driscoll says. 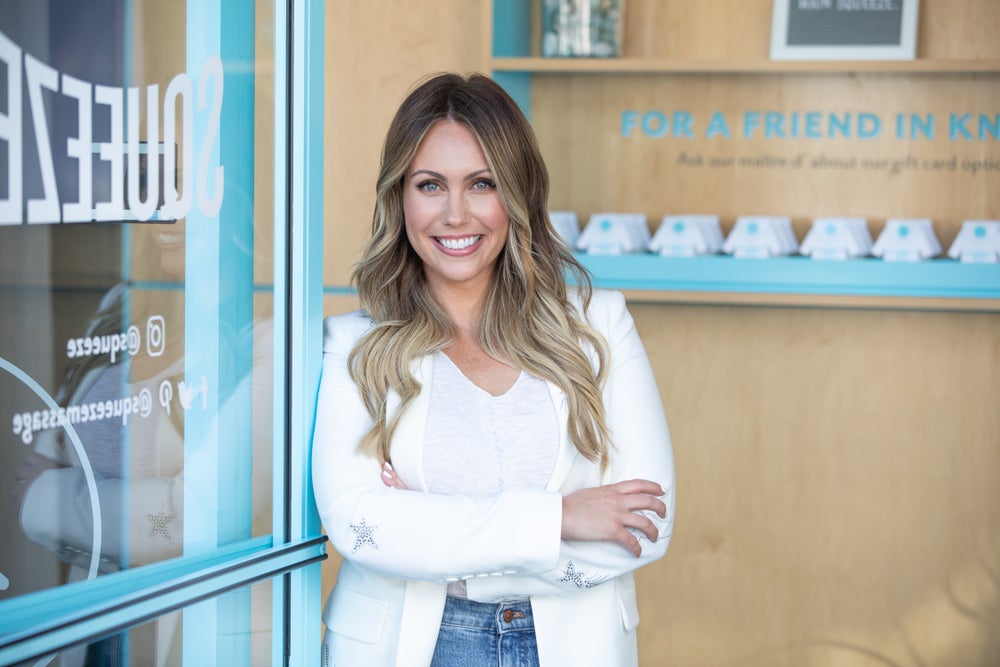 Getting back in the motions of expanding the brand after a year-long pause wasn't easy, but Driscoll says what kept them going was the reason they started in the first place, and the "why," she argues, must be bigger than the "how."

Related: Resilience in the New Normal: How to Bounce Back From Setbacks

"It's not easy," she says."I think if it were easy, everyone would be doing it."

The unwavering dedication towards the overarching goal to extend good beyond Squeeze's four walls was what kept Driscoll and the team motivated during a time when the future of the brand remained uncertain.