5 Ways Buying Lunch for a Client Makes You More Persuasive

Research shows there are many unexpected benefits from picking up the tab for lunch, aside from deducting your meal.

By Roger Dooley
January 27, 2017
Opinions expressed by Entrepreneur contributors are their own.

Do you have a client who has been tricky to win over? Or a potential business partner you're feeling nervous about meeting with? If so, there's an easy way to increase your odds -- take them out to lunch.

The benefits of doing business over lunch have been touted over the years. It's been proven again and again that the presence of food (or, in a pinch, even coffee or a little alcohol) can have a positive effect on your business deals. In fact, research has shown that the consumption of glucose leads to enhanced brain activities that include better self-control, regulation of prejudice and aggression, and an ultimately stronger group harmony -- all things you definitely want for a successful business discussion!

Beyond the physical benefits of glucose and a full stomach, a variety of scientific studies show there are less obvious, and even unexpected, benefits from sharing a lunch:

In Secrets of the Moneylab, authors Kay-Yut Chen and Marina Krakovsky describe an experiment by Nobel Prize-winner Al Roth. He used a common social science tool called the Ultimatum Game, a simple experiment that requires decision making by two people, to divide an amount of money, commonly $10.

In this "game," the first person decides on a split of the money. With no back-and-forth communication, the second person simply accepts or rejects the split. It's a sort of single-offer negotiation that can end in success (both people get the money according to the split) or failure (no money for either person).

Roth found that a mere 10 minutes of informal socializing before playing dramatically improved the outcomes. In this situation, just five percent of the games ended in failure. 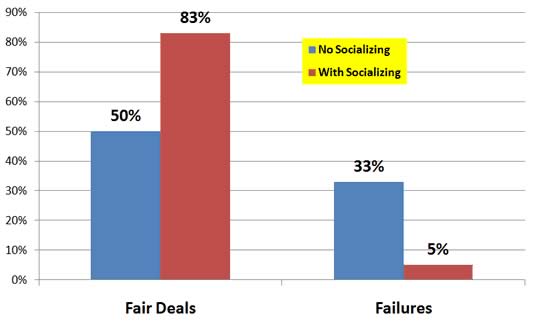 That's a massive change in outcome from a short chat. The boost may be due to the discovery of common interests or shared attributes, both well-established tools of influence. At the very least, one's fellow player will seem more human after the interchange.

Talking over lunch allows you to invoke the socializing effect without seeming to waste time in a meeting or phone call.

Related: Your Network Should Be Wide and Deep

Even when the subjects were told that the material was not produced by the same source as the food, the scientists found that those who read the persuasive material while eating were still more likely to be swayed than non-eaters. This experiment is just one of many that imply the importance of positive associations. In other words, when you give your clients something enjoyable, they will be inclined to view you and your message more favorably overall.

Reciprocation is one of the classic principles of influence described by persuasion expert Robert Cialdini. Even a small favor given with no expectation of a return favor can make the recipient much more likely to grant a much bigger return favor. One such favor is taking someone to lunch without the implication that she will buy the next one.

A study of the prescribing patterns of 279,669 physicians demonstrates this point. In the study, researchers found a correlation between physicians receiving industry-sponsored meals and a higher rate of brand-name prescriptions, which are often much more expensive than their generic alternatives.

Usually, this type of reciprocity ends up being completely subconscious. After all, how many doctors would admit -- or even realize -- that their behavior was changed by an inexpensive meal? (The authors of the paper note that other explanations of this correlation are possible.)

Can food change one's attitude about unrelated topics? One experiment says it can. Customers leaving a grocery store were asked about their satisfaction with their television in their home. Some customers had been given a food sample before being questioned; others had not.

Obviously, consuming a mouthful of food in a supermarket clearly has nothing to do with the quality of one's home television. Nevertheless, those customers who had received the sample had a significantly better impression of their TV than those who didn't.

Related: 12 Things to Stop Doing Right Now if You Want to Be Successful in 2017

Do you think much about what you order when you go to lunch with someone? Other than practical considerations, like avoiding messy dishes likely to end up on your shirt or blouse, probably not. In fact, a fascinating study shows that if your intent is to persuade, you should be very intentional about your choice. Let your lunch partner order first, and then order the same thing.

Researchers at the University of Chicago found that subjects were more likely to trust those who ate the same food they did. In their experiments, the scientists simulated an investment decision and a labor negotiation between partners consuming the same food and partners consuming different food. In both scenarios, it was found that trust and cooperation were stronger among those who ate the same dish.

Whether you need to persuade a client, a potential partner or even someone you work with, don't hesitate to take that extra-long lunch break -- science says you should!