Austrian energy drink maker Red Bull is locking horns with a local brewery in Northern Virginia over claims that its logo, slogan and name, the Old Ox Brewery, amount to trademark infringement.

Red Bull's legal team initially fired off a letter to Old Ox 10 months ago before the company had ever brewed a single beer, according to The Washington Post, in objection to a trademark application. Today, despite several concessions on Old Ox's part -- including a reimagined logo and a vow never to make energy drinks -- the legal battle rages on.

And a Jan. 28 filing from Red Bull gets downright anatomical in its opposition to the Old Ox name: "An "ox' and a "bull' both fall within the same class of "bovine' animals and are virtually indistinguishable to most consumers," the filing reads. "In addition, an ox is a castrated bull."

Red Bull has also taken issue with Old Ox's use of the colors red, silver and blue, the brewery's CFO, Graham Burns, tells the Post.

Old Ox, which says it takes its name from a Virginia road that dates to the early 18th century, has now responded with a letter of its own. The company's president, Chris Burns, took Red Bull to task for "holding us hostage," "stepping on our American dream" and "giving us one hell of a corporate wedgie." 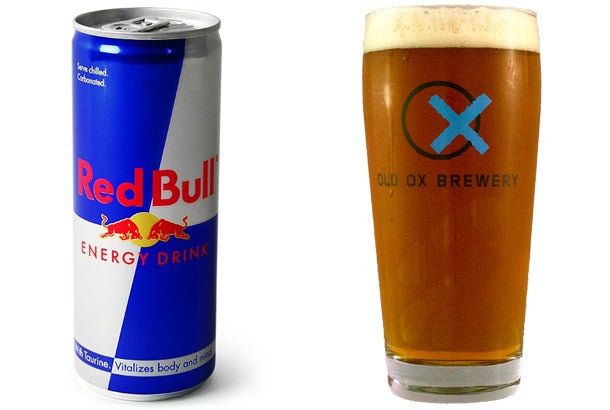 A can of Red Bull and a pint of Old Ox's Alpha Ox IPA. Compare the logos. (Red Bull; Old Ox Brewery)

"Do you claim exclusive rights to all things bovine?" Burns wrote. "Do you plan to herd all heifers, cows, yaks, buffalo, bison, and steer into your intellectual property corral, too?" Explaining that the products are ultimately dissimilar and reiterating his promise never to produce energy drinks, Burns urges Red Bull to "Leave us alone. Drop this trademark dispute."

Red Bull settled a similar dispute with England's Redwell microbrewery in 2013 after that company promised never to make energy drinks. However, Old Ox says it won't rule out potentially producing soft drinks like root beer, according to the Post, which could cause the legal wrangling to drag on for years.

After He Was Fired From The UFC, This Former Fighter Turned His Passion Into a Thriving Business