Building a Sustainable Brand -- One Thoughtful Step at a Time

In December 2011, Kayce White began selling her handmade, all-natural cleaning products at craft fairs around Brooklyn, N.Y. Within a year, her company, HAVEN Sustainable Home Goods, scrambled to fulfill the company's first major order: About 16,000 units for home décor retailer West Elm, whose executive she had met at a fair.

Today, HAVEN sells its still-handmade cleaning products online, through West Elm and at about 30 retailers—mostly boutiques—nationwide. Gross sales climbed 400 percent year-over-year in the first nine months of 2013, and White says deals with larger, nationwide retailers are in the works.

Entrepreneur.com recently spoke with White about lessons she's learned while expanding her business in recent months, as well as goals for the coming year.

Lesson #1: Be selective about where you sell.
It's hard to say "no" when first starting a company, White admits. But as HAVEN gained more publicity, many flash-sale sites and sample-box subscription companies have approached her about selling HAVEN products through their sites. At first it seemed like a natural way to generate publicity. But White realized that many such sites wanted to heavily discount her products, undercutting prices offered through retailers. Some of these sites also didn't lead to many sales. White says she's learned to be more selective about which sites she works with and has found that sites that allow her to showcase her company's background and mission—such as OneKingsLane.com—provide the best value. "Each one of those experiences can go differently," she says. "You can make a lot of money, or you can have experiences where you just see nothing and put all this money and energy into it."

Lesson #2: Listen to your customers. White is committed to selling highly sustainable, all-natural products, but discovered that she needs to somewhat balance that goal with ensuring the products are consumer-friendly. For example, the company originally sold its all-purpose cleaner refills in large recycled plastic bottles with enough concentrated solution to refill three spray bottles. But many consumers were confused about how to use the refills. The company has decided to switch smaller glass bottles instead that contain one refill each. "A big part of growing is learning how to make it easy for consumers," White says. "The most sustainable [model] would be to have the three refills in one bottle," but that's not a smart solution if consumers have trouble using it. "As you go through the motions of growth, you start thinking a little differently," White adds. 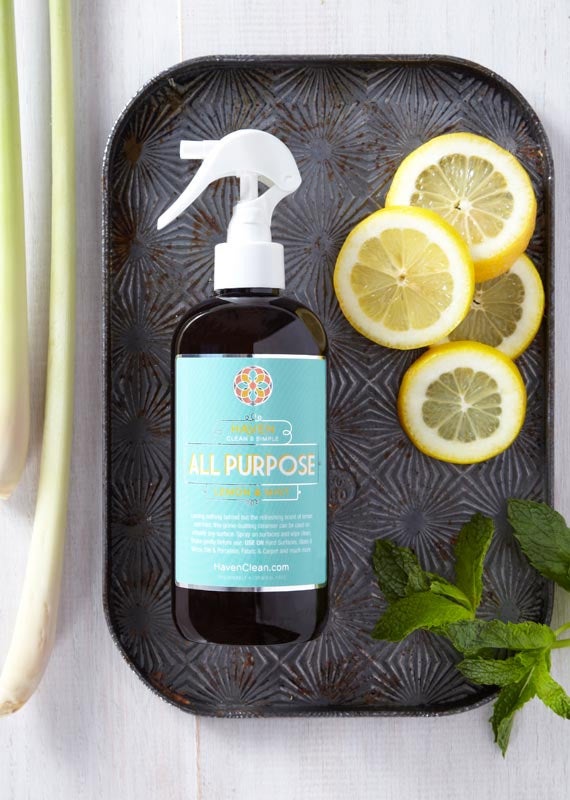 Refills for HAVEN's all-purpose cleaner came in large bottles that made sense for the environment but not to customers. As the company grows, it is learning how to balance what's environmentally friendly and customer needs.
Image credit: HAVEN

Goal #1: Don't lose sight of your core values. As HAVEN grows quickly, White says it can be easy to lose sight of the company's original mission. For example, one of White's goals is helping people to see that they only need a few types of cleaning products for their homes. They don't have to purchase separate products to, say, clean different rooms or amenities. But adhering to that mission also means the company must resist the temptation to offer more cleaning products than consumers really need. Instead, she says, the company plans to grow its product lines by focusing on complementary types of products, such as soap dispensers and home décor items.

She's begun partnering with other craft-fair makers to offer their unique products through HAVEN's web site. Moreover, White says she must ensure she's working with retailers who are a good fit for selling HAVEN products—which probably aren't big-box stores like Wal-Mart. "I have to stay rooted to the real reason that I did this," she adds. In the year ahead, she plans to add a few more employees to her staff of three, but wants to make sure they are, as she calls them, "HAVEN mavens"—people as passionate about sustainable cleaning and the brand as she is. She is also looking to move the company's manufacturing from its current small Brooklyn loft in Williamsburg's industrial section to one that's two-and-a-half times bigger.

As she hires people, it will give her more time to focus on being the visionary and ensuring the growth is handled with care.

Goal #2: Find angel investors with similar goals. White has been networking with angel investing groups around New York in hopes of getting about $100,000 in growth capital, she says. The money will help HAVEN grow to the next level. But White says she's also being selective about the angels with whom she works. She hopes to find an angel or two that is passionate about investing in environmentally sustainable brands and that can offer both money and guidance. "There are a ton of entrepreneurs in New York that are looking to add a really great roster of companies to their portfolio," White says. "The reason I've been bootstrapping so far is because I want to find somebody, or somebodies, who are really passionate about sustainability and green companies."

Are Robots Coming to Replace Us? 4 Jobs Artificial Intelligence Can't Outcompete (Yet!)

Is artificial intelligence (AI) evolving to make our lives easier? I believe the answer is that it is a bit of both in the long run, but there is no need to panic for now.

A Jar of Sand From the Beach Where Tom Brady Retired Is Selling For Nearly $100,000

Brady's retirement announcement has many diehard fans wanting to memorialize the moment, and now, thanks to one eager eBay seller, they can have their shot.

The billionaire says the last few months were a "pain" he would not "wish on anyone."

Are You a Trauma-Responsive Leader? Why Trauma-Informed Leaders Make a Happy and Healthy Workplace

By bringing more trauma awareness and building a culture of patience, compassion, forgiveness and empathy, we can create the understanding that leads to happier, healthier and more productive people and places of business.