An inside look at the rapidly growing brand-partnership review site for influencers.

By Jason Falls
March 5, 2021
Opinions expressed by Entrepreneur contributors are their own.

They say money is the root of all evil. It's most certainly the root of heated topics among influencers who depend on brand collaborations for revenue. The influencer pay gap — the difference in pay between white and non-white influencers, and the similar difference in what men are paid versus women — is a powder-keg issue across the board.

Influencer Lindsey Lee's frustration with being undervalued by brands led to her developing F*** You Pay Me, a platform that allows influencers to publish reviews of brand partnerships. Since launching late last year, the site — which keeps users' info anonymous and information on brands "locked" until at least 10 reviews of it are posted — has generated more than 500 posts as of this writing, despite still being in its minimum viable product (MVP) phase.

Lee's vision for the site is to function as a sort of Glassdoor for the influencer set, allowing users to compare the rates they command from brands and more accurately identify their own value. They can also distinguish brands that typically pay well from those that don't. 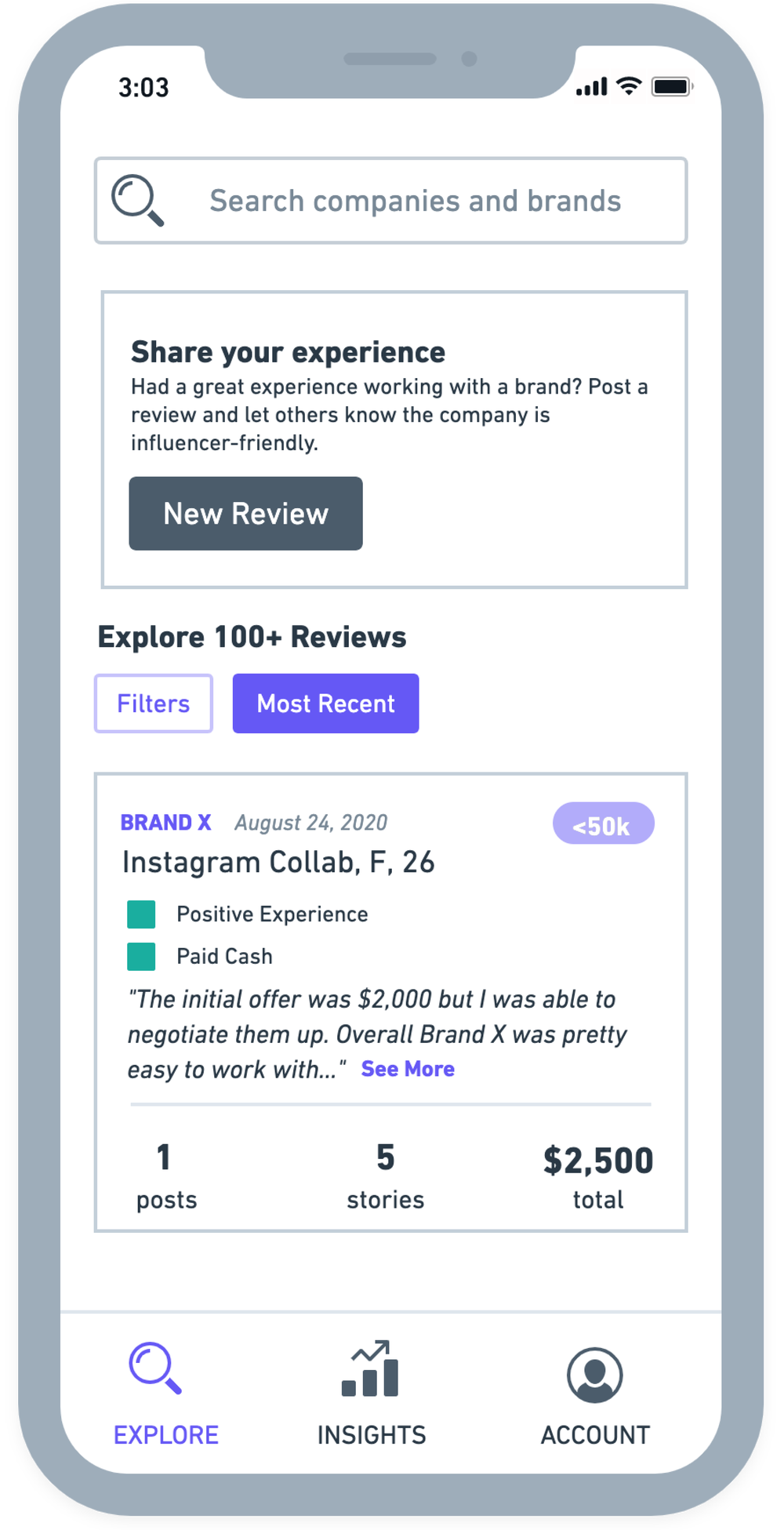 "The pain points of an influencer are the exact same pain points of a freelancer," Lee says of the parallels with Glassdoor. "You're presented with an opportunity for a job, and you have no idea how much to charge because every job is different. But you don't want to lose the job, so you end up accepting less than what you're worth."

Lee adds that her site is necessary because, too often, money is left on the table at the expense of the creator.

Related: Where Do You Fall on the Philosophical Spectrum of Influence Marketing?

How the site works

When an influencer registers to use the site, they're required to file their first review. The site's membership is limited to what Lee calls true influencers, i.e. anyone who has contracted with a brand to post content online. Each is asked to identify demographic information, like gender and race, to allow the site to produce appropriate filters within reviews.

Site users can navigate to a brand and see details, including the brand's average engagement payout, what type of content they look for and what other creators have to say about working with them. And eventually, you'll have visibility into the aforementioned demographic discrepancies. (Influencer-marketing platform Klear found the average pay for male influencers in 202 was $476 per post, while women earned just $348.)

Lee views F*** You Pay Me as a complement to the forces already driving pay-gap conversations, and specifically credits Instagram account @influencerpaygap — a clearinghouse for influencers to share individual experiences of prejudice or low-balling — with helping close that gap.

"I created F*** You Pay Me because it's a product I wish I had when I first started influencing," she elaborates. "Black, brown, womxn and LGTBQ+ creators, advocates and activists have long been driving the conversation and action in this space. F*** You Pay Me is merely a tool available for data and support."

Lee admitted on her blog post announcing the business that F*** You Pay Me was born out of rage, writing, "I feel it every time a brand asks me to perform this work yet is offended by my desire to be compensated for said work."

Prior to ideating the site, she spent several years as a freelance model and a social media manager, sandwiched around a stint in finance. It was during the latter that she emerged as an influencer, creating the Instagram account Ms. Young Professional to spoof the daily sexism she experienced. As she amassed followers, brands reached out for collaborations, many of whose offers Lee did not find amusing.

""We don't have a budget' was one of my favorite lies," she remembers. "When you hear, "We have no budget,' what that means is they have no budget for you."

Her inner voice began crying out to respond, "F*** you. Pay me."

What's in a Name?

"I named it F*** You Pay Me because I didn't want there to be any doubt from the creator or freelancer that this is a platform actually built for them," Lee tells me. "There are dozens of platforms out there that say they're built for influencers. That's not true. They're built for brands' needs first and creators' needs second."

In her experiences as a social media manager, she even used a tool that gave her the option to only search for influencers that will accept free product as payment. "It just drives the value of a creator's work down," she says. "And I don't like it."

Related: How to Build a Successful Influence Marketing Campaign

The roadmap for F*** You Pay Me includes adding influencer-marketing software companies and agencies to the list so creators can share experiences with them, too. Agents and talent managers will eventually be invited to contribute as well.

Lee says she is currently seeking funding and has applied to at least one accelerator. Her plans for a business model are "still being worked out," she concedes, but she allowing brands to post opportunities for influencers is something she's considered.

"My hope is that if I have a huge pool of influencers, it will create a network effect, and the brands will follow," she explains. "Most platforms go get brands and hope the influencers will follow. I'm just flipping that around."

Still, she is adamanet that influencers' reviews will always remain anonymous. "This is about sharing information and helping creators and freelancers," she says. "But I do want it to be mutually beneficial for brands, too."

The initial reaction from brands may be to shudder, but Lee says they might be surprised to know that "more than half of our reviews so far are positive."

It's the ones that aren't that will keep some brand managers up at night, because now they know the market is holding them accountable.