King of Kitsch: Meet the Company Behind Big Mouth Billy Bass and a Dozen Other Novelty Items From Your Childhood

By Laura Entis
October 15, 2014
Opinions expressed by Entrepreneur contributors are their own.

Gemmy Industries was founded in 1984, but its products are a perfect fit for the social-media era, screaming (sometimes literally) to be shared via Vines, Tweets, Instagrams and YouTube videos. The Coppell, Texas-based company makes novelty and decor items -- lots and lots of novelty and decor items, a percentage of which you'll probably recognize, if not from you own childhood than from your children's. You can thank Gemmy (pronounced 'Jemmy') for infamous animated creations such as Pete the Repeat Parrot, Douglas Fir, the Dancing Hamsters, Buck the Animated Trophy, Frogz…the list goes on and on.

Even if you aren't familiar with any of the above, chances are you'll recognize Gemmy's most notorious product. That's right, ladies and gentlemen: This is the company that brought the world the Big Mouth Billy Bass.

First released in April 2000, Big Mouth Billy Bass wasn't just a hit, he was a cultural sensation. The premise was simple: comprised of realistically fishy rubber and plastic mounted on a trophy plaque, the Big Mouth Billy Bass was typically hung over a mantle or fireplace. On first glance, the fish looked real -- perhaps a taxidermy prize from a relative's fishing expedition? Walk past him, however, and the head would abruptly swivel away from the wall to face the room. After a slight pause, he would sing.

Remember, this was back in 2000, a time when Tickle-Me-Elmo and Furby had ushered in a national obsession with cute, animated toys. Initially, Big Mouth Billy Bass was genuinely startling. "It was magic," remembers Jason McCann, chief executive of Gemmy Industries. "People wanted to show their friends so they could watch their reactions."

Tweets, Facebook posts, Vines and YouTube videos didn't yet exist; Billy Bass went viral anyway. Restaurants lined their walls with the talking fish, DJs played the "fish song" (back then, "Don't Worry, Be Happy" or "Take Me to the River") in venues across the country, and Billy Bass appeared on talk shows. At first, stores sold out so fast that waitlists were implemented. "We sold millions and millions and millions," says McCann.

Related: A Netflix for Legos ? Building a Startup Brick by Brick

But as is the case with most novelty items, the honeymoon period was short-lived. Sales quickly fizzled. Besides a brief reintroduction in 2005 in select Walgreens stores, Billy Bass was retired from store after a year. In popular culture, however, he lived on, as a guest star on The Sopranos in 2001 and as the inspiration for a deeply bizarre McDonald's Filet-O-Fish commercial in 2009. (This past May, he was impersonated by a gamely, wriggly Lass Bass -- the ex N'Syncer -- on The Tonight Show.)

Now, to mark his 15th anniversary, Billy Bass is coming back, just in time for Christmas.

While McCann is excited about the return of Gemmy's most notorious product, Billy Bass is just one of the nearly 3,000 new items his company will place on the shelves of big retailers like Walmart, Bed Bath & Beyond, Coles, Target, Loews, Home Depot and JC Penney this year. Gemmy is a product powerhouse; half of its 100 U.S. employees are dedicated to creative development. (All of its products are designed in the States, but manufactured in China.)

"The blessing and the curse is that I can make anything," McCann says.

Related: 15 Fun Gadgets to Give to Anyone This Holiday Season

Halloween and Christmas remain Gemmy's bread and butter. Every year, thousands of new product concepts are drawn up for each holiday. For inspiration, Gemmy employees study pop culture, focusing on the blockbusters, the chart toppers and anything that's gone viral. "We look at the macro trends that are happening," says McCann. "We're thinking: 'What are the funny things that are going on in culture that we can translate into Christmas or Halloween?'"

This approach creates a strange lag time. While Gemmy's production schedule is impressively tight – "we can get products to market as fast as 90 to 120 days if we are aggressive," McCann says – a song that's dominating the charts when Gemmy singing hamster/Santa/parrot is conceived has often fizzled by the time the product is released.

Run down the list of past products, and you'll find a bizarre range of creatures programmed to sing past-their-expiration-date hits: dancing hamsters belt "Everybody loves Ku-Fu fighting," plush frogs rap 50 Cent's "In Da Club," sunglass-wearing horses sing "Gangnam Style." They're oddly touching and kind of heartbreaking, these toys; each captures a specific moment in mass market popular culture, often a moment just too far away to be current but too close to be nostalgic. Because of this, it's easy to dismiss Gemmy products (Big Mouth Billy Bass included) as gag items, novelty gifts, cheesy junk that's good for one season, and then worthless.

McCann says he does occasionally worry that by the time a product hits stores, the particular pop culture phenomenon it represents will be over for good. "The life cycle of a song is pretty tight," he admits. He thinks about this less than he used to, though. In most cases, he finds, it doesn't really matter. The "Gangnam Style" horse that was released after the original song had been overplayed into annoyance? "It blew up in stores. We could have sold a ton more."

That's because Gemmy products aren't made for the cultural intelligentsia; they're geared towards easy-to-delight kids. "Certain people get over it very quickly," McCann says. "Others, especially younger kids, just love it." 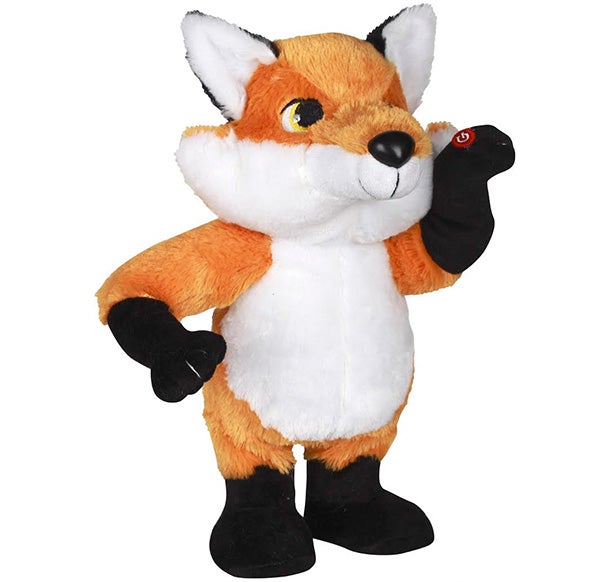 Which is perhaps why Gemmy is so enduring; for many of us, a particular product instantly transports. For this writer, it's Gemmy's "Kung-Fu Fighting" singing hamsters. It was the summer of 2001, and my sister and I were infatuated. We would press the button, watch the show, and then press the button again. I'm confident my parents knew that by purchasing the toy, they were signing up for rounds and rounds of "Everybody Loves Ku-Fu Fighting" courtesy of two nun-chuck wielding hamsters, but they bought it anyway because they knew we would love it.

"It's also about kids and new families," McCann says. "That's the ultimate reward, when you see kids dancing with our Santas in the aisles [of retail stores] and sharing it."

Now more than ever, Gemmy relies on word of mouth, via social media, to spread the message about its new products. These posts are usually personal -- families capturing baby's first Christmas or the cat freaking out and trying to take down an inflatable. "These posts aren't ours, they're theirs," says McCann. "It's about them experiencing the product."

Related: 'Reading Rainbow' Is Coming Back Thanks to Kickstarter