The Way Back Machine: Nostalgia Sells

Gareb Shamus turned his love of comic books and video games into a leading role in a multimillion-dollar industry.

By Robert Tuchman
May 5, 2010
Opinions expressed by Entrepreneur contributors are their own. 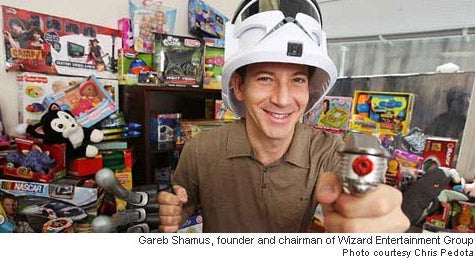 The joy and fantasy of comic books and video games are often looked upon as fleeting childhood experiences. That was not the case for Gareb Shamus, who, as founder and chairman of Wizard Entertainment Grouphas successfully turned the nostalgia of his childhood into a multimillion-dollar enterprise. Since the first publication of Wizard Magazine in 1991, Shamus has built a pop culture empire that boasts several award-winning insider comic book magazines, with millions of readers in more than 40 countries, and has emerged as one of the leading faces of the growing pop culture industry.

As a child, Shamus had a passion for comic books and sports cards. He explains how growing up around his parents' Rockland County, N.Y., comic book store rooted pop culture in his blood. "The store, the items, the collectibles were always something we did together," Shamus says. The frequent family trips to comic book shows are etched in his memory. However, he never imagined that comics would become such a significant part of his future.

After graduating from State University of New York/University at Albany in 1991, Shamus began writing a small newsletter for the family store. The newsletter grew in popularity, and people seemed genuinely interested in the production of a larger publication. At age 21--and with little savings--Shamus borrowed money from friends and family and launched Wizard Magazine, the first color magazine devoted strictly to the comic book industry.

Since then, Wizard Entertainment has produced several leading industry publications, including ToyFare, InQuest Gamer, Anime Insider, Special Forces and Toy Wishes, all of which have become centerpieces in the world of comic books, video games and action figures. Wizard Magazine has been named one of the country's top 20 magazine launches in the past 20 years. The popular magazine covers just about everything relevant in popular culture today, from the newest video games to toys and comic books.

"If there is something the collector, or the first adopter, is involved with, we are delivering it through print, online and at our conventions around the country," Shamus says. As the company evolved, the business transformed from newsletters and magazines to growing digital arm--including podcasts, newsletters and exclusive interviews--and convention business.

Shamus attributes this success to knowing what consumers are interested in and connecting them with what is hot today. "You have to want to be a leader and not go by the status quo all the time," Shamus says. "You also have to not be afraid to take chances and sometimes have to make unpopular decisions for the good of the brand. This cannot be an emotional process to be successful; it has to be very focused on progress."

Cultivating a positive working environment is key to sustaining that success. By surrounding himself with individuals who love the work they do, Shamus has created what he calls a "culture of success" within the Wizard Entertainment family. This, Shamus says, has enabled him to establish a strong foundation for his business.

He credits his father for instilling in him an unwavering entrepreneurial spirit. Shamus says that watching his father make sound decisions, he learned to follow his own path in business and stick to what he believes in, despite opposition. He adds that he enjoyed the freedom of growing up in an entrepreneurial environment as well as the process of building his own business. He realized that in order to do what he wanted to, he had to do it on his own. Despite collaborating with several major corporations to build his brand, Shamus still found a way to stamp the work with his personality.

What advice would Shamus give to young entrepreneurs looking to follow their dreams? Once they get the capital they need to launch their business and follow their dream, to , Shamus says, guard it like it's a child. "As great, as unique as your ideas are, you must be properly funded and understand what it takes to get a business running successfully," he says. "The worst things we see are great ideas with not [enough] capital to execute them. You need the capital to make the business run properly and give you the chance to be successful."