These Founders Couldn't Find Comic Books With Strong Black Characters, So They Created Them. Then Kevin Hart and Mark Cuban Invested $500,000 in Their Business.

Husband and wife Manuel and Geiszel Godoy are the co-founders of Black Sands Entertainment. Now, they have their eyes on an impressive IPO — but they're not losing sight of their dedication to the Black community.

"I wanted to tell a story about African history before slavery," Manuel Godoy, co-founder of Black Sands Entertainment with his wife Geiszel, says. "[So I wrote] a story about Ancient Egypt and the surrounding areas. And it was amazing — people gravitated toward it because they finally felt included in historical contexts."

The Godoys began Black Sands Entertainment in 2016 to draw attention to the characters and stories that so often go unwritten in mainstream media. Now, the comic publisher and media venture boasts dozens of titles that represent the entire diaspora, and young adults are devouring them — just like the Godoys would have, if they'd had the opportunity at their age.

Black Sands stands apart for its dedication to Black history and its commitment to the Black community, but something else has also contributed to its striking success: The Godoys' status as United States Army veterans.

Ahead of Veterans Day, Entrepreneur sat down with the Godoys to learn how they've grown Black Sands from crowdfunding to almost IPO with investments from Kevin Hart and Mark Cuban — and how their Army backgrounds have informed their entrepreneurial journey along the way.

"Momentum is the biggest factor when it comes to raising capital."

From the start, the Godoys spread the word about their content on social media and set their sights on raising capital. Between 2017 and 2020, Black Sands ran four Kickstarter campaigns and raised $80,000 in total. Then, in 2020, they decided to launch another campaign on WeFunder.

"We basically judged the intent of our biggest followers," Manuel says of their approach to the 2020 campaign. "We asked them, 'How much were you planning on investing?' [Then we said], 'If you were to invest this much money, we would spend at least 15 minutes talking to you about any questions you have about our company, our financials, etc.'"

"No one wants to be the first investor," Manuel adds. "But if you already got 300, 400 investors in the first day, everybody's like, 'Hey, I'm joining too.' Momentum is the biggest factor when it comes to raising capital if you're going through customers."

And the Godoys have kept up Black Sands' momentum since those early days, climbing to the top 1% of the Patreon community, raising $2 million in capital and earning more than $2 million in revenue to date.

Related: Why Creators Are Recession-Proof

"We got on stage, pitched our information, and everybody fell in love."

Earlier this year, the Godoys appeared on Shark Tank to pitch their company.

The Godoys knew that Hart was going to be one of their judges ahead of time.

"We knew we had to make him fall in love with our content," Geiszel says. "So we got on stage, pitched our information, and everybody fell in love."

Initially, the Godoys offered the Sharks a 5% stake in Black Sands for $500,000, with the funds earmarked for animation development and additional titles. But Hart and Cuban countered with a 30% stake for the same investment, citing the media resources that Hart's production company, HartBeat, could provide as Black Sands expands.

The fact that Black Sands' Shark Tank deal went through is a testament to its strong business model and the Godoys' entrepreneurial savvy. Forbes spoke to 74% of the people who were offered deals on the show in seasons one through seven and found that roughly 43% of those agreements didn't go through — because the Sharks pulled out or changed the terms.

Black Sands recently announced the closure of its deal with Kevin Hart's Hartbeat and is currently in development on an animated feature and series around the Black Sands flagship franchise, Black Sands.

The company is also planning to go public. Not only are the Godoys dreaming of an eventual $1 billion IPO, but they're also envisioning a future where Black Sands' fans-turned-investors are at the forefront, continuing to hold stock as "their slice of the pie."

Related: The Basics of Raising Capital for a Startup 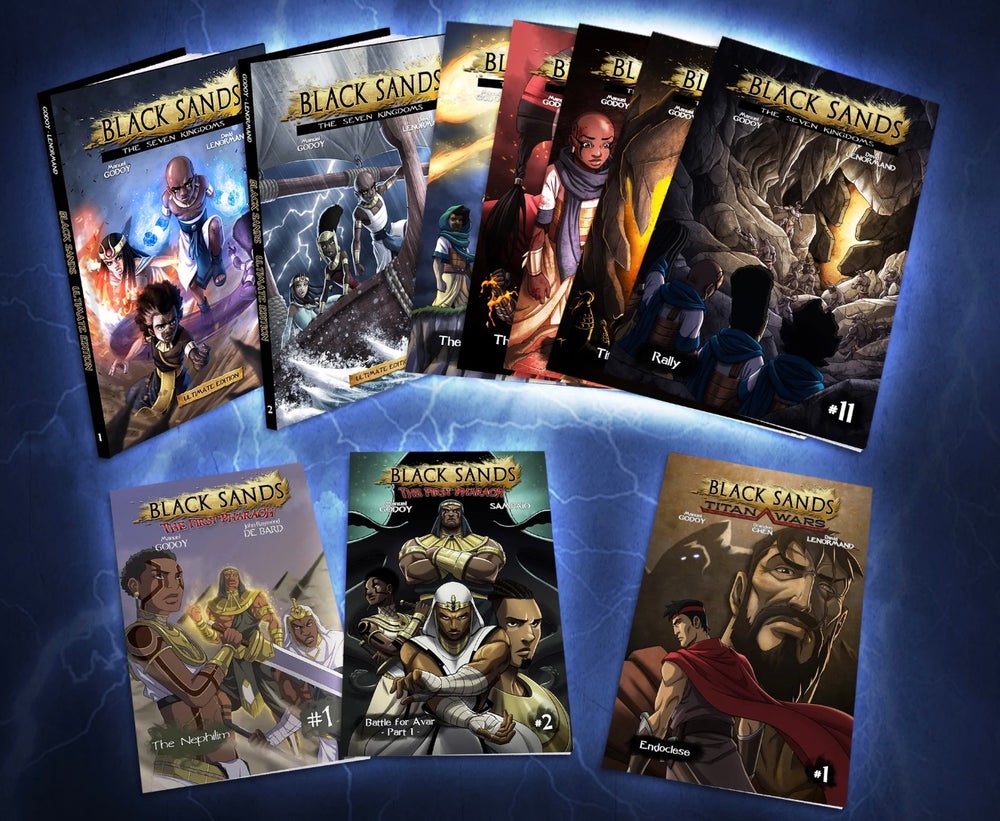 "Being in the Army taught me how to be an entrepreneur."

The Godoys' experiences in the Army have helped lay the foundation for Black Sands' success.

"Being in the Army taught me how to be an entrepreneur," Geiszel explains. "In the Army, I was leading a group of 30 soldiers. So it taught me about how to manage a team and run a company, because [it gives] you that discipline and structure you need."

Manuel agrees, noting that the Army imparts significant leadership experience, even for those lower on the chain of command — because you have to learn how to get things done on time.

Another skill the Army teaches that every founder should have on lock? Inventory.

"You have to know where everything is and how much you have," Manuel says. "Otherwise, one day you run out, and it takes three months to get the next part. And you're out of business for three months."

The Army has given the Godoys essential skills for running a business — and it's also inspired some of Black Sands' narratives.

"I'm a war nut," Manuel says. "I love war, so anything that has to do with strategy, military tactics, logistics, that's stuff that I put into my writing. I make sure it logistically makes sense that [a particular] battle is happening, and that's probably why people like the accuracy of the storylines."

Related: 7 Qualities the Army Instilled in Me That Helped Me Launch a Business

"Veterans always want to choose five different businesses at once. I'm like, 'No, stick to your favorite.'"

There are many reasons why veterans make excellent entrepreneurs. Manuel notes the benefits they have at their disposal, which can help accelerate their business's growth.

Still, the Godoys stress it's important to keep several key things in mind.

First up? Stick to one business idea — and see it through.

"Veterans always want to choose like five different businesses at once," Geiszel says. "Stick to your favorite, take those military skills, apply them to your everyday business life, and you will succeed. Don't give up. If you fail, keep going."

Additionally, you should know exactly who's buying what you're selling.

Once you have your idea and customer in mind, you have to surround yourself with people who will help you level up.

"Hiring the right team is very important for a business to thrive," Geiszel says. "And you want to make sure your team is going to be loyal to your company."

One sure way to cultivate company loyalty? Pay people fairly, raising benefits as the company succeeds — it will make employees feel valued and willing to continue their contribution. Manuel says that Black Sands has people who have been on the team for five or six years.

"We have to champion things that the Black community wants us to champion."

Above all else, Black Sands is a company that refuses to sacrifice its principles.

Originally, the co-founders wrote and designed all of Black Sands' comic books by themselves, but they've begun allowing other Black creators to write for them as they build their own brands.

Black Sands has also harnessed the power of Kickstarter as part of its larger effort to lift up Black creators and their work. The Godoys recently launched a campaign for Everett Montgomery's Flame comic series. 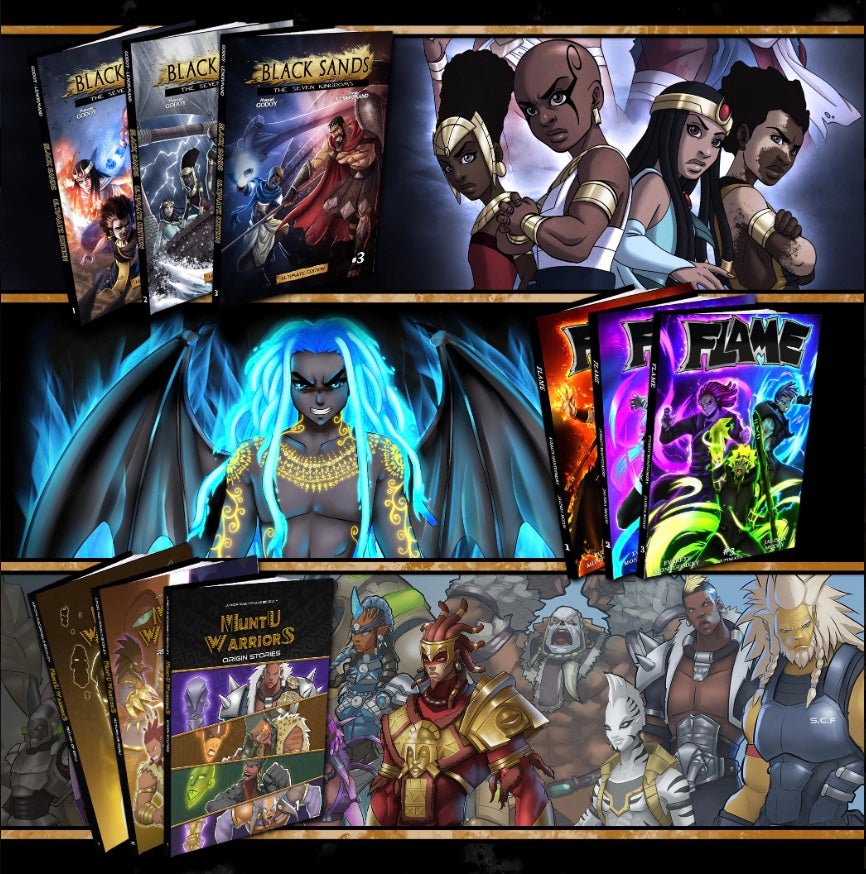 "We are a company that's dedicated to Black history," Manuel says. "And that means that we have to champion things that the Black community wants us to champion. We can't just go out there and be like, 'Oh, we make comic books, and that's all we do.' We have to be involved in social issues and other things that are related. We have to be able to say that we actually are doing something about it."

Amanda Breen is a features writer at Entrepreneur.com. She is a graduate of Barnard College and recently completed the MFA in writing at Columbia University, where she was a news fellow for the School of the Arts during the 2020-2021 academic year.