By David Bank
March 31, 2015
Opinions expressed by Entrepreneur contributors are their own.

The February ribbon cutting for Gigawatt Global's new $24 million solar field in Rwanda was an impact investment showcase. More than 28,000 solar panels, arranged in the shape of the African continent, added six percent to the entire country's electricity production.

Gigawatt Global, an American-owned Dutch company, completed the project in less than a year after signing a power-purchase agreement with Rwanda's national utility service. The solar field is the first operation project under President Obama's Power Africa Initiative.

Furthermore, the project leases land from a nonprofit youth village founded after Rwanda's 1994 genocide to care for the country's most vulnerable children.

"It moved fast because we had a very nimble team and we worked around the clock," says Sari Miller, a New York investor who helped Gigawatt's managing director Chaim Motzen with what she says were "many, many hours" of daily contact and review.

Related: How One Startup Accelerator Is Giving Social Impact a Spotlight

Early involvement and hands-on participation are the keys to Miller's remarkable record in impact investing. She honed her methods in a successful earlier career as an executive and dealmaker in real estate, finance and insurance, including the sale of a company to AIG. Since selling most of her real estate holdings in 2006 and 2007, she estimates she now spends 75 percent to 80 percent of her time working with companies in her impact investment portfolio.

"I decided this is going to be my new direction, my new asset class," she says. "I wanted to invest with purpose. I thought you could actually be profitable and do well, despite it being a bit alternative."

Often the first angel to invest

Miller has been present at the creation of a string of high-impact, for-profit ventures. She was the first angel investor in Leapfrog Investments, a private equity fund that invests in micro-insurance and other financial service providers for low-income and financially excluded families rising out of poverty, primarily in Africa and Asia.

She was also an angel investor in Grassroots Business Fund, which provides equity and debt to agricultural and artisanal businesses to improve the livelihoods of low-income people. She is a member of the board of Digital Divide Data, a business-process outsourcing service that provides jobs and education for disadvantaged youth in Cambodia, Laos and Kenya.

Miller was the first angel, yet again, to invest in both Purpose Global, which runs advocacy campaigns around issues such as climate change, LGBT rights, violence against women and the crisis in Syria; and in Impact Republic, an investment and brand strategy group.

Related: This Group Aims to Level the Playing Field for Men and Women Business Owners Around the World

Miller doesn't have a specific annual target for impact investments and admits that she has "a disproportionate allocation to social impact," but says she is eager to do more. "I love the space; I love the people I meet; I love the startup mode," she says.

She got lucky with Leapfrog, her first foray. A fellow school board member introduced her to Andrew Kuper, who had an idea for a social-impact fund, but little business background. Miller served as a reference and helped him narrow his focus to insurance for the global low-income consumers. Leapfrog's first fund raised $135 million. "That was miraculous," she says, given that it was a first fund in a new asset class launched in the midst of the global financial crisis. "We didn't know if we could raise anything."

Last year, Leapfrog closed Fund II at $400 million. Across both funds, the firm estimates it has reached 44 million people.

If Leapfrog aspires to be in the top quartile of all private equity firms, Miller's next project is at the other end of the spectrum. Miller met Harold Rosen at a dinner and offered advice as he was spinning out the Grassroots Business Fund from the International Finance Corporation. Rosen is an iconoclast who warns that boosting low-income livelihoods generates single-digit returns at best. "Harold is a purist on a mission," Miller says. "He and his team are very hands-on with high and sustainable impact."

For his part, Rosen says Miller adds a lot of value as an investor, but that doesn't mean he always takes her advice. Miller has urged Grassroots Business Fund to take on a bit more risk to expand its operations. Rosen says he is cautious about rapid growth given the handholding needed by businesses targeted at low-income populations.

Not all of Miller's investments have panned out. She was the founding angel backer of Nexii, the first publicly regulated impact investment stock exchange, based in South Africa in partnership with the stock exchange of Maurtius. The exchange never gained traction and was merged into Singapore-based Asia IIX, another social-enterprise transaction platform.

Miller says that she performs standard due-diligence and every company must meet basic business criteria for team, governance and business plan. But she makes her ultimate decisions based on the social impact and the passion of the founders. "The goodness factor, that's really critical," Miller says. "If they don't have it, they drift from mission."

Motzen and Yosef Abramowitz, Gigawatt Global's co-founders, reached out to Miller after hearing her speak at the Milken Global Conference. Gigawatt has a goal of installing 1,000 megawatts of solar generating capacity in Africa, but they had not done a deal, Miller says. "I became a partner and advisor with a focus on helping make the first deal a reality."

At the launch, John Morton, chief of staff of the Overseas Private Investment Corporation, which provided an early grant, said, "This project moved the fastest, it moved the smoothest and this is the only project currently among the 24 projects that we have supported that is actually producing power into the grid."

Particularly appealing was the solar project's site in the Agahozo-Shalom Youth Village, a residential village that provides education and job training for Rwandan orphans. Lease payments from the solar field help support the school. Residents are being trained in solar technology. As Miller says, "The story resonated." 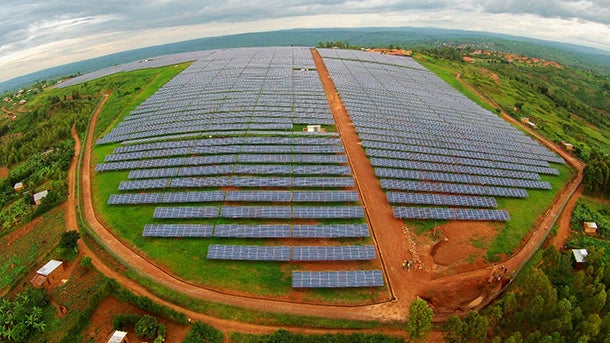 Editor's Note: The Agahozo-Shalom Youth Village is a corporate impact project of Liquidnet, a financial sponsor of ImpactAlpha. Liquidnet is not an investor in Gigawatt Global.

One of a series of impact profiles produced in conjunction with the Case Foundation's publication, "A Short Guide to Impact Investing."